FOREST FLAME HAS A WALK IN THE PARK 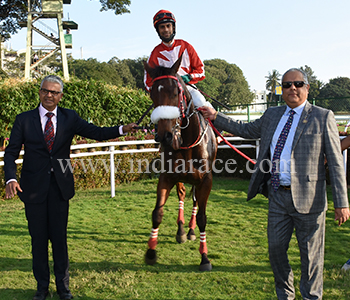 The best horse in the circuit, Forest Flame, hailing from the stables of trainer Sulaiman Attaollahi, much to the delight of her connections the Poonawalla family and Chaduranga Kantharaj Urs, treated the opposition with disdain to win the Bangalore 1000 Guineas, the first classic of the season. On the strength of this performance, she is sure to start as a short priced favourite for the Indian 1000 Guineas to be run at Pune. She was money back for this race.

The railbirds had everything going their way with favourites nailing bold colors to the mast. All the races in the day were won by those who cornered all the betting, be it in the official pools or the unofficial ones.

Eight fillies came under the starter’s order in the plum event. Trevor settled Forest Flame nice and easy in the rear bunch before the favourite assumed command at the top of the straight. The favourite pulverized the opposition winning by seven lengths. Antibes was second and she in turn beat the rest by another seven lengths. Forest Flame is a classy horse, but the others in the fray were all of inferior ability.

After letting down many times, the Sulaiman ward Cerise Noir finally won, beating off the challenge of Automatic who came from the rear of the field only to miss the bus by a mere neck. Psychic Strength very nearly threatened the party by enjoying the lead till the shadow of the post but close home was beaten in a three-horse finish.

Prasanna Kumar is the toast of the public who love to put their money on his horses as the majority of them justify the expectations. Galvarino came for one-sided betting and the favourite gave Hyderabad ace Akshay Kumar an arm-chair ride to victory winning by five lengths. The Response was second while Port of Beauty saved the place money and the third horse pool chasers.

Another trainer who is also enjoying good success whenever his horses come in for big betting is Neil Devaney. Green Channel who had run down the field twice during the last season showed good improvement to win start to finish. John guided the fortunes of the winner. Indian Star who was also seen getting quiet support came home late to take the second spot.

Neil Darashah has high hopes on Christopher Wren whom he thinks is a classic prospect. Christopher Wren who was backed strongly to oblige after a good second behind Lord Frankel in his last run, readily won. Veteran jockey Srinath did the job without any fuss. Now that he has won, he is sure to be a force to reckon with in the South India 2000 Guineas which the trainer thinks his ward can win. Livisilla who is owned by the enthusiastic Chandrasekhar Rai ran on well to take the second position and should win next time out.

Srinath had a double for the day when he packed punch in his efforts to guide Padmanabhan trained Legendary Princess to a narrow win over Marco Polo on whom apprentice jockey Arul did his best but found the winner too good on the day.

Prithviraj pulled off a nice gamble on Michigan Melody who won with plenty in hand over another strongly backed Stroke of Genius.  Prithviraj was not so lucky with Raven Rock who got lot of support but lost in the shadow of the post to another well backed Cherokee Moon.