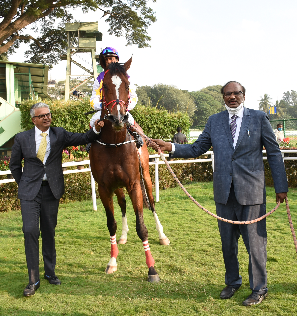 After he made a smashing debut, many old hats in the game were of the view that Lagarde, a progeny of Kingda Ka is in the classic mould and the Sulaiman Attaollahi ward will make his presence felt against the best in this campus. But after his below par effort in his last start which shocked most followers of form, not many fancied Lagarde to emerge the champion colt. The Padmanabhan-trained Golden Oaks on the strength of his facile victory in his lead-up race was fancied most and Nisus from Prasanna Kumar's yard too had his fair share of supporters. The two frontline contenders in the second classic of the season, the 2000 Guineas had done no wrong and looked in good nick to call the shots in the mile long classic journey. The two did dominate the proceedings and the show down at sun down on Saturday generated maximum interest and excitement before Nisus piloted by Hyderabad ace Akshay Kumar gained the edge in the final furlong only to lose out to Suraj Narredu and Lagarde, who produced a winning gallop in the final furlong to the delight of his trainer and his proud owners, Khusroo Dhunjibhoy, P Prabhakar Reddy and Rama Seshu Eyunni. Golden Oaks finished third ahead of the Neil Darashah-trained Christopher Wren while Manifest from the stables of S Ganapathy who after making a brilliant debut had impressed most in a mock race failed to make the frame. The winner clocked 1:37.33 seconds and that's a fair classic time considering the fact that it was the public choice Golden Oaks who chose to set the pace in the big event.

Most knowledgeable and many pundits not happy with the decision of the Golden Oaks' think-tank to make every post a winning one opined that the favourite colt perhaps would have done better had Trevor ridden him in check. The fact that Padmanabhan's strike rate in the classics is high and that the leading pro knows his onions shuts out the debate and Golden Oaks, it appeared found the final furlong taxing and whether ridden in check or out in front, the result would remain the same and all credit to Sulaiman for registering a Guineas double and the two champions from his yard will hope to better their efforts on Republic Day.

Boy Suraj Narredu is booting home winners at all the premier centres and three classic victories at three different centres in a week is good enough reason to celebrate with bubbly and salute Suraj, he deserves all the appreciation and the top gun is on top of his game.

The Pradeep Annaiah schooled Anakin started the day, justifying favouritism in the opening event, the Davangere Plate run over a sprint. The winner who was strongly fancied to score by the insiders and right connections proved too good for his 13 rivals cantering home by more than six lengths and on the strength of this performance is certain to provide an encore. Arrogance finished second ahead of Aerospeed while Fierce Fighter made the frame.

The second event also run over a distance of six furlongs saw another public choice record a facile victory to the delight of the railbirds. Priceless Gold from trainer Rajesh Narredu's yard  was fancied most in the Atmanirbhar Bharat Plate and the winner provided Suraj Narredu an arm-chair ride to success. It is clear from this victory that Priceless Gold is a goodtype and his connections were aware that this son of Excellent Art has the ability to chalk up a couple of wins this season. Glenary finished second ahead of Paradise Beckons who caught the eye and it will not be long before this Sriram Komandur ward gets into the winners' circle.

After two favourites set the ball rolling for the followers of form, a successful coup on Ultimate Striker in the lower division of the Jog Falls Plate helped favourite punters maintain their winning streak. The winner from Lokanath Gowda's yard opened at (7/2) and quickly was smashed down to (7/4) while the Irfan Ghatala schooled Augustina who opened the favourite was available at (3/1). The talented Darshan astride the winner guided Ultimate Striker nice and easy all through the sprint trip before he packed punch in the final furlong to snuff out the challenge of Perfectgoldenera. Augustine managed to only save money in place while Azeemki Princess who garnered good support in place failed to justify the confidence of her supporters finishing fourth.

After the first three results went in favour of punters, the Azhar Ali-trained Whizzo dropped a bombshell winning the Bold Majesty Plate much to the chagrin of the Padmanabhan camp who fancied last start winner Jack Ryan sweetly. The Padmanabhan ward streaked ahead when the race came on a boil and looked set to score before Ashad Asbar brought the rankoutsider Whizzo into contention in the final furlong and snatched the verdict at the shadow of the winning post. Ombudsman finished third while Realia from Prasanna Kumar's yard who gained the top billing surprisingly failed to repeat her last effort and eventually finished down the field.

In the lower division of the Hampi Plate run over a sprint, Sea Of Cortez, Port Of Beauty and the the topweighted Queen Regnant  headed the list of fancied runners in what appeared a very open affair. None of the three came good and that made it easy for the Arjun Manglorkar schooled On The Trot to register a shock win in the hands of John. To the credit of On The Trot, it must be mentioned that he won in convincing fashion while the fancied trio failed in their mission to produce a winning effort. Aceros gained the runner-up berth ahead of Port Of Beauty while Queen Regnant came home fourth. This Arvind Ganapathy hopeful will do a lot better if his connections allow the `Queen' to showcase her potential over longer trips.

Narayan Gowda and his owner S N Harish  struck again through Alexaandre Dumas in the upper division of the event. Alexandre Dumas, who landed a good gamble for his owner over a mile long trip in his last essay was entered in a sprint event and again was strongly fancied to score. Alexandre to the delight of Harish and Narayan Gowda did just that while providing leading pro Trevor Patel an easy victory. Asgardia did well to gain the second spot from The Corporal while Donna Bella made the board.

The Prithviraj camp went bang-bang on Mr Humbke in the concluding event. He was touted a good certain bet  by the Prithviraj camp despite the fact that Green Channel from Inayathullah's yard had the credentials to make a race of it and Sun Splash too was in the mix. Green Channel  won the event in a thriller from Sun Splash while all that Mr Humble could do was finish a tame third. Apprentice jockey Arul looked calm and composed while making his run on the rails to gain the verdict by the shortest of margins at the post. Sun Splash in defeat was not disgraced and lives to fight another day. The same cannot be said of Mr Humble simply because in this game it dosen't pay to be sweet and humble.