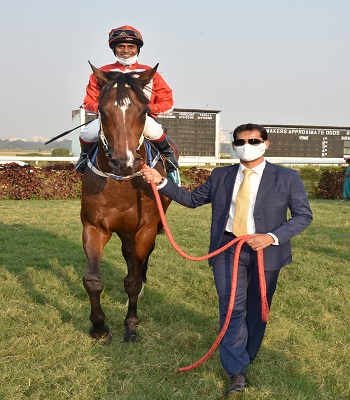 The Boxing Day bout between two-renowned heavy-weights at RCTC may not have been a “thriller in Manila” but it was definitely an “edge-of-the-seat nail-biter in Calcutta”. Shades of Ali-Frazier rivalry in the classic duel between Star Superior and Trafalgar at this centre. The pair are likely to cross swords once again in the Indian Champion Cup next month. Last season, Star Superior had won both these races and is therefore in line for a double-encore unless Trafalgar decides otherwise. The James McKeown runner had the misfortune of losing his right fore shoe during the running of this mile race.

An over-confident Suraj Narredu appeared to have left it too late before pulling off a dramatic win on Rajesh Narredu-trained Star Superior (Excellent Art-Ramjet) to lift the Deepak Khaitan Memorial Calcutta Gold Cup by the proverbial whisker from a large-hearted Trafalgar who gave it his all. The third horse involved in the close finish was front-running Psychic Force. All three runners were shouldering a bone-crushing impost of 62kg and proved their worth in the highest class. It was a finish worthy of a prestigious event named in the memory of the former “Czar of Calcutta thoroughbred racing”.

The supporting event, the 2000 metres race for the Army Cup, had only four runners in the fray but turned out to be an equally eventful affair. Unlike her Oaks run, the favourite Rosina failed to hit the front. Inca with Suraj in the saddle showed the way. Rosina was running a close second while Shivalik Sight was last of four but in touch with the leaders. At the turning for home, apprentice Rupal Singh got an opening along the rails and cleverly guided top-weight Shivalik Sight into the gap. Where the lad flawed was that he resorted to the stick too early. His mount was travelling well and hands-and-heels would have served the purpose. Had he resorted to the whip after he was a length and half ahead, he would have pocketed this race with aplomb. As it was, the vastly experienced and shrewd Suraj Narredu stopped riding his mount the moment Shivalik Sight crossed his path after veering out under the whip. The inexperienced lad had handed Suraj the race on a platter! Suraj was well aware that the guardians would hand him the race in the Stewards room – all he had to do was switch course and finish ahead of Rosina which he eventually did.

Yet another race that created quite a stir during the warm winter afternoon was The Accalia Handicap. A huge off-course gamble on Zodiac Prince saw the latter’s odds plunge to 17/10 – the clear favourite in the 14-horse field. The story did not end there. Apprentice Hasib Alam on Beowulf veered out sharply after the jump out and caused severe interference to both Spring Valley and the much fancied last outing winner Sirona. Alam’s antics saw a domino effect which led to the fall of Nikhil Naidu from Treasure Hunt. The race was won impressively won by Aashay Doctor-schooled three-year-old colt Lakmos (New Famous-Firefoot) who displayed wonderful acceleration in the straight to win as he liked in the hands of Neeraj Rawal.

Trainer Vijay Singh and jockey Suraj Narredu combined successfully on three runners – Cletus, Inca and Daring Heart. Cletus (David Livingstone – Fly Like The Wind) won the Aayush Plate for two-year-olds effortlessly. Last outing unlucky loser Daring Heart (Multidimensional-Romantique) made ample amends in the day’s final event – the seven-furlong sprint for the Snow Forest Handicap – wining it by a widening margin of four lengths after facing a bit of traffic in the straight.

The curtain-raiser saw Vikash Jaiswal – trained Around The World (Net Whizz-Celtic Princess) with Sai Kiran in the saddle come good after edging out the favourite Little Finger. Though outclassed by Summer Air in her last essay, Vijay Singh-trained Excelsior (Whatsthescript – Loveofmylife) came back with a bang and lapped up the extra furlong in style with Hindu Singh doing the honours.