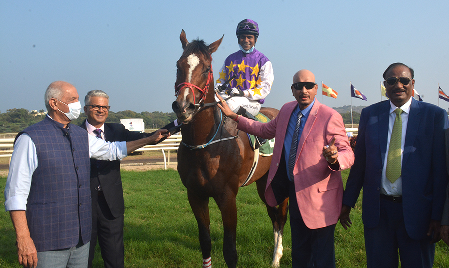 Lagarde (Kingda Ka – La Terrasse, Nanoli Stud) displayed high class temperament and depth in quality when he reproduced the magic he created on the Bengaluru turf, just the other day while winning the Bangalore 2000 Guineas (Gr2) there, in similar fashion. He had waited for the right moment then to pick up speed and unleashed a powerful run in the final stages to beat Nisus and Golden Oaks in the final run-in much like he did at Pune today. Lagarde now has two Guineas titles in his three victories and that’s a commendable achievement.

Golden Oaks perhaps shot away a tad too fast, amassing a big lead from early on. Lagarde settled in second, a good six or seven lengths behind the leader. Nisus and Alluring Silver raced close behind Storm Trigger who had Leopard Rock alongside as they raced away past the halfway mark at a good clip.

Golden Oaks entered the homestretch with a handy lead and seemed to be going well too. Sandesh had a plan and he set about making them catch up with him. Well, it worked only partly as he managed to stay ahead of Nisus, however, Lagarde was up to it and arrived with a strong finish, picking up acceleration in the final furlong. Jockey Suraj Narredu had it all covered as he rode out confidently to collar Golden Oaks and sail ahead to win the Indian Classic with a measure of comfort. Storm Trigger fought hard to snatch the third spot from Nisus and that was an achievement too for the ‘one-race-old colt’ who had won on debut not too long ago. Lagarde’s was a class act and did his connections proud with another superlative performance within three weeks of his Bangalore Classic triumph, taking into his stride the duress of travel involved after a hard race there.

“Yes there was that little bit of apprehension when Golden Oaks pulled away and worked up a big lead, but honestly, I was confident that I would get him at the business end of it. Lagarde did all that was asked of him and even before I got past Golden Oaks I knew we would make it,” said jockey Suraj Narredu.

Trainer SS Attaollahi was obviously delighted. “It’s wonderful to win back-to-back and winning an Indian Classic is always a great joy. We didn’t have any specific plans as such and when you have a jockey like Suraj, you know your horse is in good hands. Lagarde had travelled well and looked happy here in Pune, so we were confident and hoping for the best,” quipped the trainer.

Roberta (Multidimensional – Moonlight Romance, Usha Stud) bounced back with a start-to-finish victory to clinch the Homi Mody Trophy warding off stablemate Wizard of Stocks. She took charge soon on settling down and had In It To Win It behind her until the turn. Trouville raced in third, While Wizard of Stocks lost considerable ground at the start but made up quickly to join the bunch with the first couple of furlongs.

Pesi Shroff trained Roberta entered the straight with a slender lead but with both In It To Win It and Trouville not matching up to her speed, Roberta looked safely in front. Wizard of Stocks did raise a bit of hope when she surged past Trouville and inched closer to Roberta. However, Roberta galloped on gamely and pulled it off by over a length to spare. Wizard of Stock did well to finish second clearly ahead of Trouville.

Sunderji’s Kildare (Leitir Mor – Awarding, Poonawalla Stud) showed that he is in peak form galloping away to another impressive victory. He was off in a flash and had no trouble in stretching away from the rest once inside the final 400 meters. He too piled up an eight length lead at the wire beating his hapless rivals to pulp. Flying Visit improved to take the runner-up spot while Lorraine ended third. In the kind of form he is in, Kildare looks in line for a hattrick.

Makhtoob slipped through the inner rails soon on straightening up but before he could propel away, Noble Heir arrived with a fluent gallop to overhaul him easily and then draw away in the final few strides to post a comfortable victory. Makhtoob surrendered without a fight as Noble Heir dominated the final 100 meters.

Debutante Queen of War (Multidimensional – Dhaawiah, Usha Stud), trained by AM Jadhav, scored a very impressive victory and showed signs of being a special talent in her very first run. Jockey NS Parmar was going hard-held until the turn and didn’t have to do much either after turning for home. Queen of War galloped smoothly and on a tight rein with Parmar only guiding the filly home. She won by a widening margin without any assistance from the saddle yet clocked a fast timing of 1:09:81 on debut! She showcased raw speed and outpaced her rivals completely and is sure to blossom into a top class sprinter. Visionary finished a faraway second, nearly nine lengths behind. Heidmar took the third spot.

MK Jadhav trained Magic In The Wind (Leitir Mor – Black Magic Woman, Poonawalla Stud) earned his first winning bracket with a show of great resolve. La Teste took off smoothly from the gates and all the way until into the straight. Shae and Magic in the Wind were in pursuit, while Maplewood raced behind this pair along with Multistarrer and Allied Attack.

La Teste kicked on after turning for home with Magic in the Wind warming up close behind. The rest were not up to it as they were some distance away and none really firing up. La Teste galloped on even as Magic in the Wind started to gain on him. The pair fought hard and in the final few strides, Magic in the Wind, with jockey NS Parmar in the saddle, wore down La Teste to score by a comfortable margin. Multistarrer beat the rest alright, but finished more than five lengths behind the runner-up.

Winter (Arazan – Snow Dew, Poonawalla Stud) sprang a surprise beating a more fancied lot, producing a zip in her final finish. As they turned for home, favourite Evangeline looked in trouble as she found herself in a tight corner for want of galloping room, while Ciplad had a free stretch ahead of him. Blue Blood and William Wallace were vying one another for the lead when Ciplad accelerated to surge past these two. Evangeline had to skirt around and that dimmed her chances there and there. Ciplad shaped well but Winter, who was right with him all through, started to gather momentum and came at Ciplad with a good burst of speed. The Nazak Chinoy trained filly sped past Ciplad to score a thrilling win to earn her maiden victory in her second attempt. Ciplad held off Evangeline to take the second slot. Evangeline never got to gallop in full flight; hence her run is best ignored.

Malesh Narredu trained Decaprio (Quasar – Monopoly, Ruia Stud) not only provided himself his first win but also to his sire Quasar, a champion in his own rights. It took a while coming, but success is sweet no matter when it comes. Decaprio took off from the gates and led the field all the way; the positions behind him kept changing but Decaprio galloped on regardless. He grew stronger in the straight and sped away from them all to win untroubled piling up the margin with every stride, eventually winning by about five lengths. Streek ran on to take the second slot ahead of Highland Woods.

Gold Member (Sedgefield – Scarlet Slipper, Jai Govind Stud) notched up a clinical victory, making every post winning one. She too was off from the gates quickly and quickened once they turned for home. Gold Member, like Decaprio, also looked the winner a long way from home. Divija finished second five lengths behind. War of Attrition improved well to take the third spot.

For the professionals, jockey NS Parmar scored a treble, while jockey PS Chouhan scored a double.