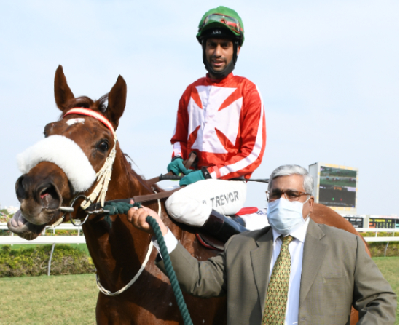 Lombardy (Leitir Mor – Lombardia, Poonawalla Stud) lived up to the top billing she garnered on merit and duly won the HRC Golconda Trophy (Gr2) without causing much anxiety. She settled at the rear end of the field initially and jockey Trevor got the Deshmukh trainee to improve positions along the way to be in striking position as they turned for the final run.

The final finish seemed poised for a close finish when they were a furlong and half away from home, with long-time leader Good Connection paddling on to stay in contention. Downtown Gal showed a bit of spark and charged ahead and she did raise hope with about a furlong to go. Trevor then got into the act and started to gain on the new leader. Lombardy and Downtown Gal fought for a few strides before Lombardy excelled in the last 100 meters and outpaced Downtown Gal. Mirana took a while to get going, but finished on with a sustained gallop that was only good enough to push the tiring Downtown Gal to the third spot. Lombardy had sealed the issue by then and Mirana settled to end a good second.  Lombardy clearly was superior to the bunch and won by a comfortable margin, with quite a bit left in the saddle.

Lombardy thus stretched her unbeaten run on the Hyderabad turf, notching-up her fourth victory at the venue. Her only non-winning performance was at the famed Mahalaxmi racecourse, where she finished a good third in the glamorous Poonawalla Breeders’ Multi-Million (Gr1) behind star performers such as Forest Flame and Golden Oaks. Lombardy also displayed her versatility having won each of her four races over varied distances of 1100m, 1200m, 1400m and now the Golconda Guineas run over a mile.

Catalina (Lord Admiral – Corlette) on the strength of some steady preparation by trainer Srinivas Reddy and astute handling by ace jockey Suraj Narredu galloped to a memorable victory on debut. She raced alongside Total Darc close behind leader Bruno and Golden Amaris until into the straight. Suraj swung into action soon after and had Catalina made the charge ahead, going at a good clip. While Golden Amaris fell back, Bruno stayed on to keep his chances alive. Total Darc too was ridden hard but could not get into the required rhythm. Catalina kicked on to win by one and half lengths, while Bruno held off Total Darc narrowly to secure the runner-u berth.

Consistency paid off for the L D’Silva trained Blazer (Lucifer Sam – One Track Minded) as he converted a few frame-finish outcomes in this season, to a winning one this time. Best In Show led them into the straight and shaped well even though he took a while to shake off Incredulous. Blazer started to zero-in on the pair in front and with jockey Akshay Kumar providing the required assistance, Blazer soon gathered speed and caught up with Best In Show and surged ahead in the last 100 meters to seal it comfortably. Best In Show however, was floored by the late blitz from both NRI Elegance and Lockhart. This duo, particularly the former, arrived with a blazing run to take the second and third slots respectively and may have announced their readiness to fare better in the next assignments.

Celeritas (Total Gallery – Admiration) improved on her last effort and put in an inspired run on the day. Jockey Akshay Kumar followed Sitara into the straight and soon was all over the leader. Celeritas accelerated well and approaching the distance post, had the measure of Sitara as he sailed ahead and drew away to win comfortably. Mr Shanghai and Her Legacy came in with a late finish to take the minor slots ahead of Sitara.

Lightning Power (Multidimensional – Skylight Express) showed express speed to force the issue in the second half of the straight. Ice Berry led until the turn and faded out. While Advance Guard got stuck behind the front runners, Lightning Power stormed ahead inside the final 400m and built a handy lead. Jockey Kuldeep Singh rode out aggressively and shot ahead with the Laxman Singh trainee showing a good burst in the final furlong. Advance Guard could not muster well enough and ended a tame second. Fashion Universe held off Alta Vita for place money.

K Sateesh trained Sweet Melody (Nett Whizz – Eye Dazzler) produced a fluent gallop at the business end to score decisively over a determined effort put in by Eagle Bluff. Sweet Melody, ridden by BR Kumar, caught up with Eagle Bluff inside the final furlong and when she opened the throttle, Eagle Bluff had no choice but to give in. Sweet Melody flew past to score by just one length, but her victory was far more convincing than the margin might suggest. Eagle Bluff ended a good second and need not be disappointed as he may soon get one better. Dillon had his chances, but did well to finish in the money.

In a rare occurrence, the winners of both the divisions of the Royal Plate were siblings NRI Magic and Blazing Jupiter, both residing in the stables of trainer S Sreekant.

NRI Magic (Green Coast – Justicia) didn’t really have to wave a wand as she did the basics right with jockey Suraj in the saddle providing all the guidance to secure a back-to-back win for the Sreekant ward in the upper division of the race. Leading from the start, NRI Magic galloped smoothly throughout the long Hyderabad straight, steering clear of his rivals to compile a fairly easy victory. Mid Reader improved towards the end to snatch the runner-up berth from Blazing Speed, who was in pursuit of the winner all the way, only to be pushed to third in the last few strides. Bedazzled ran on to finish fourth.

Blazing Jupiter (Green Coast – Justicia) won the lower division with as much ease as his a year older brother did, in the hands of jockey Akshay Kumar. He too would have won start to finish if not for Mahrzad going ahead for a while for a couple of furlongs. Blazing Jupiter waited until they turned for home before opening throttle and once he did, he shot ahead and left the rest far behind. Blazing Jupiter won by close to three lengths, obviously without encountering any threat whatsoever. Star Racer held off Solo Winner for second place.

For the professionals, jockey Akshay Kumar was the leading pro of the day with a fine treble, while trainer S Sreekant and jockey Suraj Narredu scored a double each.