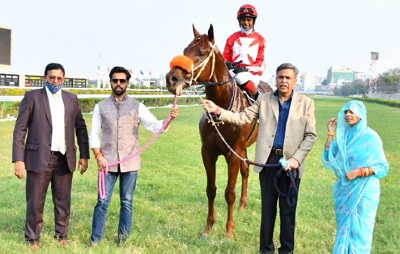 Trainer Srinivas Reddy’s Ashwa Bravo (Leitir Mor – Shadow Roll, Poonawalla Stud) property of Mr Ravinder Pal Singh Chauhan and the Poonawalla family, made his owners proud by shaking off his defeat at Chennai and bouncing back in splendid fashion to win the HRC Golconda 2000 Guineas (Gr2) in the manner he did. Ashwa Bravo had shown enough promise in his first start and consolidated this by winning his next two starts impressively. A blemish thereafter at Chennai did not deter either the chestnut colt or his rider Suraj Narredu as they put that defeat behind them to bounce back with another superlative effort.

Hidden Hope ran away to establish a big lead through the back stretch only to fizzle out after turning for home. Ashwa Bravo, who raced in the third position until the turn, soon took charge. Ashwa Bravo, back on his home turf, pulled away from the rest and within the next 100 meters had sped away from them all. Suraj used his whip hand more as a precautionary measure than to extract more out of his mount. He didn't have to, as Ashwa Bravo had a good momentum going and eventually won by a comfortable margin of three lengths and a fraction. Tigrio fought his way up to finish second, beating Bellator by a head.

A beaming Suraj Narredu said, “The camp was confident and didn’t read too much on his loss at Chennai. He was comfortable here and travelled extremely well all through the race and I was certain we would clinch this one.” Asked what went wrong at Chennai, Suraj said, “Well everything from the start of our preparation or perhaps lack of it. Chennai was not on his agenda in the first place. The announcement that the Hyderabad Classics were not going to be held made us change our plans. We had rested him and then the sudden decision to take him to Chennai didn’t make it easy for any of us, more so for Ashwa Bravo. The change in his routine and the travel was abrupt. And then the track at Guindy too did not suit him as it had rained there. I think we rushed it on him and he just didn’t adapt there. But the fighter in him surfaced when he was back in business on his all-conquering streak on his home turf. He worked extremely well and his preparation was spot on and now you see the result.”

Asked if he would go the longer distances as well, Suraj said, “He has done the mile well and he will mature further. I am not yet sure how he would stay the longer trips, but there is no denying his class and that alone, in my opinion, is good enough to be optimistic that he will get the longer trips as well.”

Sequeira trained Falcon Edge (Gusto – Dovers Hill) came up trumps to win the rich stakes of the Global Stud Million. Jockey Akshay Kumar had Falcon Edge in the third post as Ashwa Jauhar led them into the homestretch with stable companion Ashwa Raudee right by him. The long-time leader weakened soon after and Ashwa Raudee took charge. Falcon Edge began to chase down Ashwa Raudee and stepped up speed approaching the distance post. Ashwa Raudee fought on and kept his hopes alive, but a couple of cracks and some forceful pushing ensured that Falcon Edge got into a fine rhythm and acceleration as he stormed ahead in the last 100 meters to win by a comfortable margin of two lengths. Proud improved well to finish in the money.

Lagos (Gusto – Blumarine), like Falcon Edge, followed his debut win with another solid victory. The Netto trained filly was off to a good start but didn’t mind it when Thunder Road decided to get past her and take charge.

Once in the homestretch, Lagos didn’t wait too long to show her superiority and dashed past Thunder Road to sail ahead at a good clip. She looked pleasing in the final furlong, even easing up in the last few strides to win convincingly. Unstoppable put in a good effort to take the runner-up slot well ahead of Ulysses.

Classic Remark – Charmstone) came into his own with a fine effort to race away to his sixth career victory, beating a good set of horses. Apprentice jockey Surya Kumar seemed to have a plan in place as he shot out of the gates and stole a march amassing a sizable lead through the early half of the race. He entered the straight with a handy lead and all the Srinivas Reddy ward had to do was sustain it all the way. Agni, Pontius Pilate and Galloping Gangster, all formidable rivals, were in chase, but none could blaze away and get past the winner. Classic Remark made every post a winning one. Agni and Pontius Pilate made a last ditch effort in the final 100 meters, but both fell short by half a length, finishing second and third respectively.

The opening race of the day turned out to be an exceptionally thrilling one with Faiyaz Khan’s Blickfang (Gusto – Fast Escape) having to dig deep to pull off a last stride victory over Just Incredible. They were off to a good start with Just Incredible darting ahead to lead the field with Turf Monarch in second having Mark My Day for company, Polonsky and Blickfang raced together a length behind this pair.

Into the straight, Just Incredible surged further ahead and was shaping well too. Even past the distance post, just Incredible seemed to have had it covered; his lead of about two and half lengths looking handy. Jockey Akshay Kumar started to ride all out and Blickfang responded by producing a good final burst. Just Incredible galloped on but just could not stop Blickfang from taking it away from him right on the wire in a sensational finish. Although Polonsky finished third a good two and half behind, he did well for a debut run.

One would feel for Just Incredible as he had done everything right all through the race only to be stunned at the very end. For Blickfang it was a dramatic victory and his connections would describe his maiden victory as ‘just incredible!’

Bedford (Phoenix Tower – Browning), trained by Prasad Raju, pulled off a fighting start-to-finish and worked hard all through the straight to keep the determined Different at bay. Bedford led them into the straight with Different in chase all the time. These two were fairly clear of the rest and the battle began approaching the distance post. Different inched closer and came abreast with Bedford and the two battled hard, every stride in the final furlong. Jockey Kiran Naidu rose to the task and rode out brilliantly to clinch it by a head. Bedford shifted out under pressure and jockey Srinath astride Different tried in vain to take the race in the stewards’ room. His objection had no takers and it was dispatched in minutes. Aibak closed in too as he finished less than a length behind to earn the place stakes.

Peaky Blinders (Whatsthescript – So Charm) showed that his incredible victory in his penultimate run was no fluke with another well-scripted victory, this time with a measure of comfort, although Kesariya Balam did manage to finish under a length behind. Akshay Kumar didn’t wait too long once into the straight and quickly galloped past leader Rhythm Selection. Ashwa Yashobali could not muster well enough and did not make any impact. Kesariya Balam, who was way back closer to the rear, made a forceful attempt and picked up speed at a good rate, but had a lot of ground to cover. Peaky Blinders was well ahead and Kesariya Balam could only finish a close second. Rhythm Selection did well to finish in the money, holding off Ashwa Yashobali.

Satin Symphony (China Visit – Five Satins) pulled off a smooth-as-satin victory launching into overdrive soon on turning for home. The Laxman Singh ward looked sharp on turning for home and moved up past NRI Gift easily and stretched away fluently to seal the issue the moment he shot into the lead. The rest looked pedestrian as jockey Gopal Singh took charge and got Satin Symphony going. The six year old bay gelding bounded away to win by over five lengths. Hopscotch improved to finish second as did Kintsugi who ended a decent third.

For the professionals, trainers Srinivas Reddy and RH Sequeira saddled a double each, while jockey  Akshay Kumar was the top pro of the day winning four races.