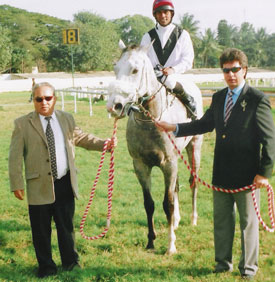 Cedros (Suraj Narredu up), winner of the Ardent Knight Cup, being led in by trainer Mr.Dhariwal & Mr.Zeyn Mirza

Jaggy Dhariwal trained Cedros continued his good run, recording his second successive win in emphatic fashion in the 1600 metres Ardent Knight Cup that highlighted Saturday’s races. The son of Burden of Proof showed good improvement in his form as evidenced by the ease with which he beat the opposition pointless and justified the strong support he received all round. Al Qamar showed signs of returning to form by finishing second and can make his mark over longer trips. Cedros who was well placed in scales had the form to recommend his credentials as he had recorded a gutsy win in his previous essay. His track workouts showed that there was marked improvement in his condition and though one expected Amazing Striker to put up a stiff resistance, the ease with which he won suggested that even if the latter was in serious business, it may not have made much of an impression on the winner. Mystic Heights set the pace with Al Qamar and Cedros racing together in the second position while Amazing Striker who was sluggish at the start, gracing the wrong end. Cedros gained ground on the front-runner, without any apparent effort and cruised away for a comfortable win without coming under pressure. Al Qamar battled to be second ahead of Amazing Striker who as his wont, showing some energy at the finish. It was a day dominated by top-weights. Slavic who had changed stables from the Byramjis to Gregory Sandhu appeared a ready made winner in the 1400 metres Vijaynagar Cup as he was to take on Divin Lumiere who has this knack of raising hopes in punters every time she fails and eventually running as a strong public fancy. Slavic who was a winner of two races was not hard pressed to win from Divin Lumiere who finished second best for the fourth time in five outings while Magical Spirit moved from way behind to snatch the third spot from Global Gal. Divin Lumiere has always defied her looks in the paddock parade which makes many convert in her favour despite her repeated failures! Trainer Samar Singh had a big day, saddling three winners. Kaliyug Raja, who had run behind some good horses, had the opportunity to record a long overdue win in the 1200 metres Summer Dust Plate (Div II). With Royal Presence attracting big money based more on hype and expectations, Kaliyug Raja went into the race at nourishing odds. In the event, the threat for Kaliyug Raja did not emanate from the favourite who petered out without a fight but Elusive Fantasy who was full of running at the finish. In the upper division, Pretty Queen was backed to the exclusion of her rivals as Moon Tango and Jango received support but not with any kind of strength that would attract the flow of money completely towards their side. It was Samar Singh’s Brave Bheem who upset all calculations recording a facile win over King of Queens and Courtier. Pretty Queen, who was placed till the final bend, apparently pulled up lame and finished dismally. Winner no 3 for Samar Singh came through Princess Chand in the concluding race of the day. Md Abbas wins once in a blue moon and the inspired support on Daddy’s Darling was totally surprising. But since Saturday happened to be a 'Amavasya', an upset was not entirely unexpected as top-weighted Pricness Chand thwarted the bid of Madam Marina to record a narrow win. Daddy’s Darling packed up like a pricked balloon after showing the way to the rest till the final turn. Rule The Fashion who was poorly positioned, finished with a flourish to be an eye-catching third. The day’s opener, the Holenarsipur Plate, a five and half furlong race for juveniles, saw a thrilling finish. After Silva rode Lyocel to the ground by bolting to the front and grinding to a halt when the race was on the boil, Dancing Huntress took charge and shaped to win comfortably as favourite Einstein was taking time to pick up momentum. However, Einstein flashed home with a big run only lose the race by shortest of margins. Einstein, who was crying for more ground, should make amends soon. In the day’s other action, Miss Flaunt brought off a big upset as the fancied Simply Glorious, Gallardo and Ferrazza played truant.