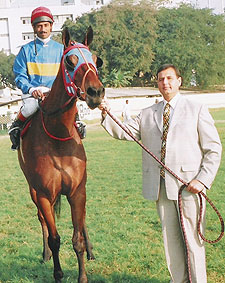 Perfect Mover (Appu up) winner of the Jog Cup being led in by trainer Mr.Eshwer

Michael Eshwer’s Perfect Mover asserted herself in the 2000 metres Jog Cup which featured Friday’s races. Perfect Mover who had run an impressive second in her only appearance this season, had the breeding to get the mile and quarter trip effectively and deserved to run as a favourite but Shaolin was more supported because of the hype generated about this average performer. Sharp N Smart could have spoilt the party had Prakash been more vigorous and as such, the finishing effort of the runner up only added to the frustration. Wingnaprayer set a fast pace as the starter dispatched the field for the 2000 metres trip, with Perfect Mover handily placed ahead of Shaolin while Sharp N Smart who went wide at the first turn, trailing the field. Wingnaprayer shortened his strides as the field took the final bend allowing Perfect Mover and Shaolin to take centre stage but the latter failed to sustain the effort and Perfect Mover went away for a comfortable win. Sharp N Smart finished with a powerful run to be a close second and had Prakash shown great vigor like he does when he shows aggressive intent to win, the result could well have been different. Diamond Hunter fought out a grim battle with National Trust and held on to win the Novice Plate (Div I), a race for juveniles. With a run benefit behind him, Diamond Hunter showed plenty of speed and won in the manner of a good type of a horse. Rameses was also strongly fancied but found the opposition too tough to handle. Forest Knight recorded a smashing win in the lower division of the race but there was a difference of nearly a second between the winners of the two divisions. Royal Flash was also strongly backed to win but the son of Royal Kingdom turned out to be a big disappointment. Mischievous Star who finished second best, showed good promise and can be in the thick of things next time out. Blairgowrie had won in an impressive after a fairly long interval and one expected the filly to maintain her winning form. But the speedy daughter of General Dane disappointed and was a spent force at the final bend. Eskimo Boy showed appreciable improvement when just about staving off the challenge of Illusive Lady to win at nourishing odds. Barnabee finished on to take the third spot. It was an eminently forgettable day for the punters who had no clue as to which way to look for the winners. Well backed horses played truant and shock results were par for the day. Fantasy Moon had the credentials to win the 1400 metres Amathos Plate but jockey Ryan Marshall got into one problem or the other to lose a sure winner. Pal Joey brought off a big upset, lasting out to win from Cellisima and the favourite.