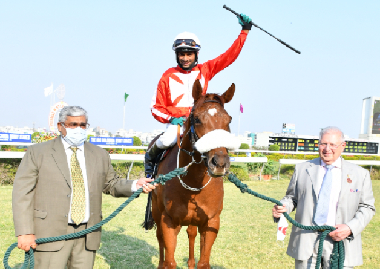 One among the top contenders and also the only filly in the line-up for the Derby, Lombardy (Leitir Mor – Lombardia, Poonawalla Stud) timed her run to perfection and claimed the HRC Golconda Derby Stakes (Gr1) in a gripping finish.

Jockey P Trevor switched Lombardy off and was at the tail end of the field for the early half of the 2400m journey. Hidden Hope made the early pace from the start until into the back stretch. Ashwa Bravo looked eager to break free and go into the lead all the while, which he eventually did after stalking the leader until past the half-way mark. Once Ashwa Bravo had taken charge, Lombardy too started to improve positions. Roaring Tiger was also racing off the pace racing alongside Lombardy and he too started shadowing Lombardy. The pace got pretty nippy once Ashwa Bravo got to the front and he entered the straight with what looked a handy lead of about four lengths.

Ashwa Bravo continued to gallop at a good clip and was shaping well approaching the distance post. Trevor got Lombardy going soon enough and started to eat up ground briskly. Roaring Tiger too was progressing well but lagging by a couple of lengths from Lombardy who had picked up top speed with a furlong to go. That’s when Ashwa Bravo looked vulnerable as Lombardy was finishing fast and gaining on Ashwa Bravo with every stride. Lombardy collared Ashwa Bravo with about 100m to go and surged ahead powerfully to seal the issue. Roaring Tiger was also finishing full of steam and he too got past Ashwa Bravo with ease to finish on the tail of Lombardy, returning a gallant runner-up. Srinath, the rider of Roaring Tiger lost his whip at the top of the straight; what bearing it could have had on the result is debatable. In my opinion, Lombardy was a shade better on the day. Towering Presence added further misery to Ashwa Bravo as he managed to pip him on the post to snatch the third spot right on the wire.

The HRC Golconda Derby Stakes (Gr1) lived up to the expectations of the high standards that are attached to the Classics. Ashwa Bravo raised hopes until deep into the straight, then Lombardy produced her best to skip away; Roaring Tiger gave enough for his supporters to shout and eventually Towering Presence did make a late dash to make his presence felt and pick up some crucial experience over the longer trips.

“It is nice to see a good crowd back in the stands under the circumstances,” said Mr Surendra Reddy, Chairman of the Hyderabad Race Club. “Hard times have been thrust upon us (due to the pandemic) and I am thankful to all the (HRC) staff, the owners and trainers for standing behind our Club despite going through tough times. I thank the patrons too for coming in spite of the restrictions in place and I am looking forward to seeing larger crowds filling the stands that would bring back the glorious days soon at Hyderabad,” he concluded.

For owner Zavaray Poonawalla it was a moment of joy. When commentator Shivaprasad asked him on the success of the Poonawalla Stud Farm’s stallion Leitir Mor clearing doubts over the staying prowess of his progenies, the Chairman of the RWITC said “It’s been a long journey. It’s been five years since we bought this stallion; we wanted to see and show people that a horse winning seven furlongs in England but has a staying pedigree can make it. We gave support to the filly (Lombardy) and it was a teamwork that saw her deliver over the 12 furlongs. It is a delight for me as a dedicated breeder.”

Zavaray further revealed “I have not come just for the Derby. I also decided to come for the fact that the Chairmen of various Clubs and I could sit together and ensure that Indian Racing continues to raise the flag higher in these trying times. When one window closes down in covid times, another window opens, and we are optimistic that we will emerge stronger in the days to come.”

The connections of Lombardy had another success in the race leading up to the Derby with Lightning Bolt (Excellent Art – Shamaal) winning the Bangalore Turf Club Trophy. Lightning Bolt gathered momentum soon on turning for home. Consigliori led them all the way into the straight and was going well too with a lead of two or three lengths. Premier Action  too started to warm but when Trevor pressed the button, Lightning Bolt pounced on them all and accelerated fluently to race ahead and line up her fourth victory on the trot by over two lengths. Premier Action did well to beat Consigliori for the runner up spot.

Trevor had started his day guiding debutante Mandala Bay (Excellent Art – Lady Danehill) to an impressive victory. Following Bruno into the straight, Mandala Bay got past the leader on a tight rein and then stretched out nicely to draw away from the field. Just a solitary crack propelled the L D’Silva trainee to bounce away at a good clip and the filly piled up a huge margin of over five lengths at the winning post. Soloist ended second well ahead of Costello.

Jockey Suraj Narredu reaped a rich harvest of four winners for the day that included a hattrick. He started off with pleasing victory partnering trainer Laxman Singh’s Vijays Simha (Leitir Mor – Zarandja) in the second race of the day. Chasing Beautiful Luv until into the straight, Vijays Simha produced a terrific burst of speed past the 400m mark and once in the lead, the bay colt picked up fiery speed and soon was out of reach of the rest. Star Dancer also finished well but simply could not match Vijays Simha had had to be content with the second slot close to three lengths adrift. NRI Sun ended third another two lengths away.

Suraj had it easy on Laxman Singh trained Downtown Gal (Multidimensional – Cest Bon) in the RWITC Cup, the four year old filly galloping away to her third win from four starts. She moved up well from the fifth spot and accelerated sweetly soon on turning for home. In a matter of strides Downtown Gal gobbled up the front runners and stole a march midway down the straight. It was clear right there that the others were in futile chase.Downtown Gal ripped it through to the finish winning by a widening margin. Spicy Star and Ayur Shakti fought for the minor slots with the former taking the runner-up berth.

Suraj’s third successive victory was a big win astride Knotty Dancer (Gusto – Daffodils) from the stables of trainer D Netto. This was an easy one for Suraj as he took off from the gates in a flash and Knotty Dancer only increased the margin once into the straight. Stunning Force and the others were no match, as Knotty Dancer got stronger in the final furlong and had drawn well clear of Stunning Force.  The three-year-old showed marked improvement over his debut run and compiled a memorable maiden win setting high standards for himself. He was way too superior to the field and won by more than five lengths. Stunning Force followed the winner all the way, while Inside Story improved to finish in the money.

Suraj capped the day with Lagos (Gusto – Bluemarine) the filly extending her unbeaten streak to three wins in as many starts. She was out quickly and let Different take over for a brief period. Lagos wrested back the initiative at the turn and surged ahead nicely and full of running. She made steady progress leaving Different far behind. The Netto trainee galloped on gamely, without being extended to score a facile victory without dropping sweat. She won by a comfortable margin and dictated the terms all through the straight to post an impressive victory. Amyra improved considerably to finish a decent second ahead of Art In Motion.

Certitude (Multidimensional – Olivia Valere) continued in the fine form she has been showing this season. She was out quickly but let Best In Show get ahead soon on settling down. Best In Show tried the runaway tactics and was well ahead on turning for home. Best In Show was about five lengths in front as they galloped past the 400m mark, but then Certitude picked up speed soon after. She gathered momentum approaching the distance post and Best In Show looked in danger even though he was still pretty much ahead. Certitude flew towards the end and zipped past Best In Show easily to win by a good margin of three lengths. Best In Show clung on to the runner up berth from Good Connection, the latter picking up only when it was all over.

Young apprentice jockey Abhay Singh provided a clean ride atop Thunder Road (Saamidd – My Mood) and mopped up the opposition with a splendid start to finish victory. The Ravindra Singh trained colt romped home to notch up his maiden victory on his fifth start. Setting off from the gates quickly, Thunder Road entered the straight with a useful lead and more useful was his tempo. He raced further ahead in the homestretch and kicked on gamely to dominate the entire stretch to the post. He won unchallenged sparing two lengths at the wire to the late finishing Blue Valentine. Unstoppable ran on to finish in the money.

Trainer D Netto signed off the Derby day with a sweet victory, his ward Sugar An Spice (Knight’s Tour – Czarina) showing a good positive leap to form and achieving her maiden success on the important day. Surfacing from the mid-bunch, Sugar An Spice, with jockey Deepak Singh in the saddle, warmed up late into the straight. But when she did find her rhythm, Sugar An Spice torched the turf with a blazing finishing run to pierce through like an arrow and singe past her rivals with authority and post a handsome victory. NRI Gift and Amaretto fought for the runner-up slot with the former getting the bob of the head right.

For the professionals, Jockeys Suraj Narredu and Trevor returned with glories with four and three winners each, while trainer D Netto saddled three and LVR Deshmukh and Laxman Singh two each.