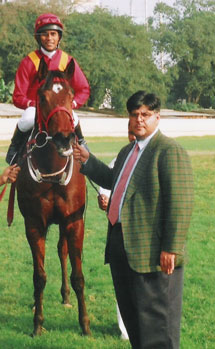 Darius Byramji’s Iberian has made a smooth transition to the highest class and the victory of the three-year old filly in the 1200 metres Karnataka Police Trophy, a race for horses rated 40 and above, which featured Saturday’s races, was on expected lines. One expected Ministrel Heights to stretch the favourite but the game performer is still rusty and slowly getting into his stride. The speedy daughter of Placerville, Iberian had everything going her way and she cantered home, making the opposition look too meek for comfort. In the form that she is in, more wins are in store for Iberian. Jockey Suraj Narredu had Iberian in front as the starter dispatched the field for the six furlong trip and the favourite was not hard-pressed to stretch away from her rivals. Crown Secret came from way behind to occupy the second spot ahead of Ministrel Heights but the manner of victory of Iberian stamps her out as the very best among the sprinters currently racing at this centre. Trainer M.P.Mahaesh had a good double through Look Alike and Magical Ecstasy. The solid support in the ring for Look Alike saw her price crashing though there was quiet support for Royal Fontaine and Follow Me Home. Jockey Rajesh Singh who rarely rides a winner these days, had the favourite dictate the pace and the three-year old filly stretched away nicely to win by a distance over Royal Fontaine who in the hands of Narasimha snatched the runner up spot back from Strong Rumours. Narasimha was an extremely successful jockey till an unfortunate fall a decade ago at Hyderabad saw him in coma for well over 10 days and reduced him to the current status. Jockey Appu induced a fine run from Magical Ecstasy in the nick of time to nose out Bravo Bedford and Gem Of A Lady in an exciting finish. With Magical Ecstasy struggling to pick up speed and Bravo Bedford having things his way, it appeared to be a difficult ask for the Mahaesh’s ward. However, Appu switched the favourite to the rails even as Bravo Bedford drifted out under pressure and drove out to get the verdict in a thriller. Trainer Loknath had a nice-priced double through Fashion Verdict and Baghzad. There was solid support for Most Convincing but the son of Steinbeck who has been plagued by a stifle problem was not up to justifying favouritism. Fashion Verdict who shot through the rails won quite competently from Rare Ivory and Kartikeri. Most Convincing finished a poor fifth. The other winner for Loknath came through Baghzad who smashed the opposition in the 1100 metres Gomos Plate, with favourite Superdash not showing any dash at all. Jersey Pride was strongly fancied to repeat in the Gajanur Dam Plate, a race for two-year olds but he was not up to conceding four kilos to his contemporary. Carabinieri made a profitable dash and grimly held from a late-finishing Jersey Pride. Bold Blaze was restrained from performing to her potential. If her pilot had let her stretch out, the result could well have been different. Winfoot had a promising start to her career as a juvenile but she had faltered thereafter. Now taking on a modest opposition, Winfoot asserted herself staving off the challenge of Fort Knox. Star Distinction was putting in good effort after the race was in the safe keeping of the favourite.