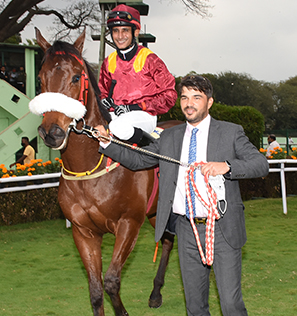 We saw Ascoval from trainer Padmanabhan’s yard serve notice of his potential, while sending out a strong message that he is a big boy in the campus with lot of potential and tremendous scope for improvement. The progeny of Excellent Art, it is needless to mention is in the classic mould and under the care of the top gun, the talented youngster is certain to only get better and realise his potential in the months ahead. The Aggarwal brothers, Rajan and Gautam for years were scouting for a couple, who could put them on the classic podium. But it was just not happening despite the fact that Rajan and Gautam were willing to pick up quality stuff from the leading stud farms in their effort to graduate to the big league. Now that Ascoval appears to have the ability to paint the big classic picture, the smile is back on the face of Aggarwals never mind the tensions they will face each time Ascoval enters the gates for the big tests.

Cool Rider from Neil Darashah’s yard on Saturday established himself as one other youngster who will make his presence felt against the best in the months ahead. The talented son of Phoenix Tower from the Manjri Stud Farm without really raising a sweat chalked out his second straight success, winning the Sherlock Bangalore Juvenile Million in resplendent style. The winner on the strength of his smashing debut was fancied most by the right connections who rated him high and Cool Rider readily justified the confidence of his trainer and supporters while providing leading pro Srinath an arm-chair ride to success. Stablemates Pecanwood and Stockbridge from Arjun Manglorkar’s yard followed the winner in that order, while the favourite Scruples in line for a hat-trick disappointed most only managing to fill the frame. Now that Cool Rider has confirmed that he is a goodtype of youngster his progress in summer is certain to evoke interest.

The principal added attraction, the Stewards Trophy produced a pulse-pounding finish, three contestants flashing past the post locked together. The magic eye nodded in favour of Abira who nosed out the favourite Northern Alliance, who in turn beat Saint Petersburg by a `nose’. It is the opinion of most old hats in the game that the decision of the connections of Northern Alliance and Saint Petersburg to go with a whipless apprentice cost them dear. The apprentice boys did produce their best but at end it was Neeraj Rawal astride Abira who was fortunate to come out on tops. Northern Alliance must consider himself very unlucky, the inexperience of Arul stopping the game galloper from recording his third success this season.

The Padmanabhan schooled Amazing Blaze was strongly fancied to score in the Kedarnath Plate, but the bred in the purple filly after promising much failed to deliver and much to the chagrin of her supporters failed to even save money in place. Second in demand at the betting counters, Redoutable from Prasanna Kumar’s yard won the mile long event with a measure of comfort from Royal Blossom while Pissarro piloted by Zervan finished third ahead of the well-backed even-money favourite.

The Irfan Ghatala-trained Griffin had the best credentials to score in the upper division of the Horanadu Plate run over a sprint. Griffin rightly opened the favourite before Chain Of Thoughts, Crimson Heart and Lightning Charlie too enjoyed fair support which resulted in better dividend offered on the favourite.  In the whipless event Salman Khan produced a copybook effort on the winner to the delight of the railbirds who recovered a small percentage of their losses, Griffin the lone favourite to oblige in the eight-event card.

Earlier, the first three results floored the punters. Commandpost from Narayan Gowda’s yard piloted by Angad won the opening event hands down paying out a handsome dividend of Rs 211 on a tenner at the tote window. Gazebo Talk from Neil Devaney’s yard was fancied most but all that the favourite did was take a lot of good money down the drain finishing a poor fourth. Fierce Fighter from Faraz Arshad ‘s stable gained the runner-up berth ahead of Azeemki Princess.

The lower division of the Horanadu Plate saw the Darius Byramji schooled Decorum drop the biggest bombshell reigning supreme in the hands of another four-kilo claimer Akash Chavan. Baroness from Narayan Gowda’s yard, a firm favourite in the event produced a dismal effort and eventually finished last. It is no secret that a number of cases of enhanced performances from the yards of leading trainers and an equal number of shocking drop in form cases have floored the followers of form and it is time the stipes and stewards at this centre exercise a more strict vigil. Penalising just one man while dozens have given the slip only exposes the poor quality of stiping and unless this improves the habitual offenders will only continue to boldly do their jobs.

Tactfully piloted by Suraj Narredu, the six to one shot Hokkaido emerged the winner in the Indian Navy Plate run over a mile. Suraj judged the pace well and timed his final challenge to a nicety to edge out the public choice First Impression. The runner-up in defeat was not disgraced and lives to fight another day. Set To Win caught the eye while finishing an impressive third and it will not be long before this Sharath Kumar ward will earn his cornbill.