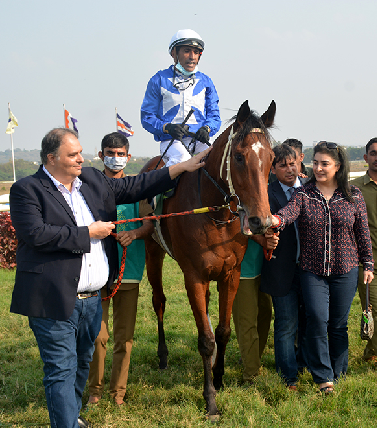 Jockey PS Chouhan and trainer Pesi Shroff reaped a rich haul on Sunday bagging six and five winners respectively. Chouhan combined with Shroff in four of those victories that included the Panchshil Breeders’ Produce Stakes, the feature event and the Class I Hyderabad Race Club Trophy, the supporting event for the day.

Pesi Shroff trained Miracle (Multidimensional – Khalila, Usha Stud) got the measure of Dragoness and burst the bubble that Dragoness had garnered after her superlative debut win not long ago. Miracle, who had herself scored a fashionable debut win, settled in third behind leader Succession and the hot favourite Dragoness until into the straight. Succession fell back when Dragoness took over early in the homestretch. Dragoness shot ahead but Miracle was right on her tail. The two fillies fought for a couple of strides, but Miracle, ridden by jockey PS Chouhan, clearly looked better as they dashed past the distance post. Miracle finished on well to win the Panchshil Breeders’ Produce Stakes (Gr3) by one length. Dragoness did most things right and shaped well at the top of the straight albeit briefly, but could not sustain her acceleration for too long. Miracle showed marked improvement over her debut run and scored her second victory on the trot. These two fillies proved far superior to their rivals.

Parisian (Champs Elysees – Anywaysmile, Usha Stud) dished out yet another impressive victory, winning the Hyderabad Race Club Trophy for Class I horses run over 2400m. Jockey PS Chouhan held the Pesi Shroff trained mare way behind as Magistero broke into a runaway lead through the backstretch. Wizard of Stock was in second with Vulcan in third.

Magistero faded away well before the turn as Wizard of Stock and Vulcan tried to make the early run at the bend. Parisian arrived with a fiery burst and cruised past the duo and slammed the door shut on them in an instant. She galloped strongly and finished full of steam, streaking ahead with every stride to notch up her fourth victory from five starts by a widening margin of over six lengths. Wizard of Stock finished second by an even bigger margin.

Tigrio (Phoenix Tower – Tigress Noire, Manjri Stud) fought hard on the race track, but got the race in the stewards’ room after being ‘nudged’ out on the racetrack by Makhtoob. Jockey PS Chouhan immediately lodged an objection for bumping and boring against the winning jockey CS Jodha. The Stewards found that Makhtoob had shifted out and pampered Tigrio and also made contact, hence the objection was upheld and the race awarded to Tigrio. The duo had battled hard all through the homestretch and had finished well ahead of Venezuela.

Shroff took the two top positions in the very next race with the Chouhan-ridden Seasons Greetings (Mukhadram – Aunty Kathryn, Usha Stud) getting the better of stablemate Arcadia by a narrow margin. Arcadia led them into the straight with Seasons Greetings mounting a strong challenge. Although Arcadia fought hard, Seasons Greetings was overbearing on her and it was not long before Seasons Greetings surged past Arcadia to post her second career victory, both coming this year. Arcadia finished less than length behind the winner, clearly ahead of La Teste.

Socrates (Nathaniel – Glint of Green, Sohna Stud) pulled off a convincing start to finish victory to achieve his maiden success on his third start. Having found one better in both his previous starts, Socrates put in a determined effort this time. He showed marked improvement over his previous starts while going over the mile and quarter trip and sealed the issue early, keeping his closest rival chancellor at bay. Socrates had a handy lead coming into the straight. Chancellor tried hard to get close to Socrates, but the latter was just too good on the day. Socrates galloped on gamely and drew away from Chancellor and compiled a huge margin of over five lengths at the post, leaving Chancellor no chance. Eight-year-old Brazos did well to finish a length behind Chancellor for third place.

Chouhan had begun the day on a winning note partnering Faisal Abbas trained Tanhaiyaan in the opening race of the day. Tanhaiyaan (Phoenix Tower – Shining Glory, Manjri Stud) lived up to the promise he showed on his debut second and walloped his rivals to notch up an impressive maiden victory on his second start. He sat right up with the early leader Arabian Storm and accelerated smoothly to sail into the lead soon on turning for home. Jockey PS Chouhan didn’t have to do much as the Faisal Abbas trainee stepped on it by himself and cruised further away from the rest. He won unchallenged and looked the winner long way from home. Northern Singer could not sustain after chasing the winner into the straight and fell when pride’s Angel came along midway down the homestretch. While Tanhaiyaan won by over five lengths, Pride’s Angel secured the runner up berth finishing clearly ahead of Northern Singer.

Chouhan added his sixth win atop Adhiraj Jodha trained Thunderclap (Whatsthescript – River Cree, Broadacres Stud) late in the day. Chouhan settled Thunderclap in the fourth spot behind early leader Pulverize, White River and Timeless Deeds. He made his move soon on entering the straight. White River had barely taken charge when Thunderclap arrived with a fiery gallop. White River surrendered meekly as Thunderclap shot ahead and opened a sizable lead. He was kicking clear past the distance post and even the late bid from Sandalphon made little impact on the winner. Thunderclap won by a good margin of four lengths. Sandalphon improved to secure the runner up berth from Timeless Deeds.

Sunderji trained Circus Queen (Surfrider – Circus Ring, Ruia Stud) posted her maiden success with a fine star to finish effort, guided by jockey Sandesh. She was off in a flash and was hard held until well into the straight. Petronia had a couple of lengths to cover, but Circus Queen quickened well on turning for home leaving it to Petronia to chase her down. Petronia tried hard but just could not catch up, eventually ending a length behind Circus Queen.

Supreme Being (Stern Opinion – Chamakchallo, Pratap Racecitement) snatched a thriller rallying well to time his run to a nicety and earn his maiden win on his 14th start. Kardashian led them into the straight, but soon surrendered the lead to Primum Non Nocere. The latter put up resistance but was challenged strongly by Supreme Being, Divija and Dowsabel. Supreme Being and Divija got past the leader and were battling stride for stride and with the winning post fast approaching, Dowsabel too lunged forward and the three hit the wire together in an exciting finish. Supreme Being, ridden by apprentice Raghuveer Singh prevailed by the shortest of margins, while Divija and Dowsabel dead-heated for the second slot.

Altaf Hussain’s World Is One (Arazan – Miss Danehill, Poonawalla Stud) looked sharp getting out of the gates and apprentice jockey MS Deora eased him into the lead. World Is One never looked back and galloped at good speed right through after leading them into the straight. Titanium and Colosseum who were closest behind just could not match up. Titanium did get a stride or two closer, but World Is One simply kicked away to score his maiden victory on his eighth start. He won by a comfortable margin of two and half lengths from Titanium and Colosseum.