Romantic Getaway pulls it off 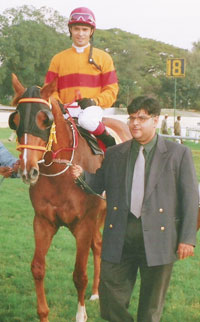 Romantic Getaway (C.Alford up), winner of the Ashoka Chakra Cup, being led in by Mr.Darius Byramji

Darius Byramji trained Romantic Getaway was the least fancied among the trio of fancied runners in the 1400 metres Ashoka Chakra Cup, a terms race for three-year olds, but the full brother to Poonawalla Multi-Million winner Noble Opinion, who went on a start to finish mission, lasted out comfortably and was even getting better at the finish against Royal Assault. Favourite Salvatore did not live up to the hype and now that he has flopped miserably, the son of Burden of Proof is better left alone till the trainer is able to sort out the problems that plague the gelding. Romantic Getaway’s last run was eye-catching but with Salvatore having run in better company, the latter was the public fancy as the connections were quite enthusiastic about his chances. There was inspired support for Royal Assault who was once reckoned to go places but whose progress had stagnated after an impressive win. Jockey C Alford who is riding with great confidence these days, had Romantic Getaway dictate the pace with Salvatore and Royal Assault in close attendance while the only other competitor, Indian Ocean, was left behind being unable to pace with the fancied runners. With Salvatore throwing his head out under pressure, it was left to Royal Assault to essay a strong challenge but she too was not good enough and in the end, Romantic Getaway was striding comfortably clear. Trainer Padmanabhan had a fancied double through Predominant and Rafaga both of whom smashed the opposition. Predominant who went into the 2000 metres Vidurashwatha Plate as the overwhelming favourite, tracked Magical Mystery from the word 'go' and then sailed past the front-runner approaching the final bend to win by a widening margin of over seven lengths over Cartouche. Magical Mystery who was also a fancied runner, packed up without a fuss. Though her breeding suggests that she can stay longer, Rafaga has proved her mettle only over shorter trips. After a good forward run over seven furlongs followed by a disappointing run in the Guineas over a mile, Rafaga looked a cinch in the seven furlongs Saptharishi Cup as the gold and brown brigade has been seen in poor light in most of the races these days. Rafaga took charge of the proceedings on turning for home and won quite easily from a late finishing Priceless Memories and War Head. The last named is due for an early success. Celtic Princess was the firm favourite for the 1100 metres Kentucky Plate, a race for two year olds but by the time the daughter of Placerville picked up speed; Seize The Night had already stolen march and grimly held on. The daughter of Serious Spender showed plenty of dash and made a successful pillar to post mission. Amazing Look was in a forward position but was not good enough. Daring Bid was another from Ganapathy yard which also did not justify public support. Daring Bid came in for sustained support but the favourite who was off to a tardy start was never in contention. The second favourite Bumper Prize had all the chances but did not have the gas to make it. It was left to long shot from Darius Byramji’s yard, Alpha Star to win at nourishing odds from Soul Serch. M.P.Mahaesh trained Divine Hero went into the 1400 metres Krishnarajapuram Plate at cramped odds and the favourite readily justified with a start to finish dash, leaving the rest stranded.