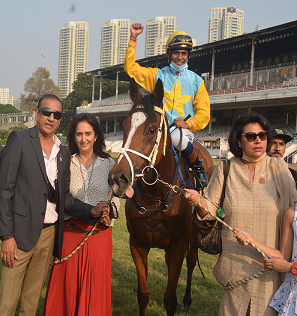 The prevailing circumstances restricting the crowd participation and the usual hyper fanfare involved with the Kingfisher Ultra Indian Derby (Gr1) may have been tampered down this year. However, Immortality (Multidimensional – Psychic Light, Usha Stud) made up amply by the joy she created on the iconic Mahalaxmi Turf. One of the top two pre-race favourites, Immortality displayed class, fervour, fashion and the fizz that’s attached to the city’s festive event – the Kingfisher Ultra Indian Derby (Gr1).

Destiny has its own ways and Suraj benefitted by getting to ride the top notch filly. Having won astride Star Superior and War Hammer in the last two years, Suraj was looking to pull off a hattrick. He grabbed the chance and guided Immortality to a resounding win, using up just enough power to accomplish the task.

The verdict of the Villoo Poonawalla Indian Oaks (Gr1) was re-established in the Derby with the top three fillies taking top positions within three lengths as also was the case in the Oaks. Only Immortality won with a good measure of comfort and a quantum margin increase over Forest Flame.

The race was run to a script, well almost; the ‘roar’ of the crowd was definitely missed as the gates flung open. Successor made a steady pace initially, leading for the first half of the race. Ashwa Bravo then spurted to the front and led for the next couple of furlongs after which Sporting Memories took over approaching the final turn. Suraj settled Immortality in the mid-bunch, just behind Forest Flame, keeping tabs on her old foe all the time. Lagarde too was right up close with the two fillies, but he never looked his usual composed self this time. Alluring Silver was right behind this trio and made her move early, progressing along the rails to be in a good position as they turned for home.

Sporting Memories led them in and there ended his moment in the Sun. Alluring Silver was quick to take the gap along the rails and she accelerated well to take charge. Forest Flame also shifted gears and started gaining on Alluring Silver. Suraj Narredu pressed the button on Immortality and the Pesi Shroff trained filly came alive with a blistering gallop. Immortality looked good even though she was still a length or so behind Forest Flame and Alluring Silver. Lagarde, it was clear, was not in contention surprisingly early in the straight. The three fillies were going at it hard and there was no other threat in sight. Forest Flame tried her best, but this time Immortality was breathing fire and collard Forest Flame with a lot more authority. She surged past Forest Flame with ease and stretched out fluently to score by a length and a half. Forest Flame once again ended a gallant second, while Alluring Silver finished a satisfying third. Taimur did well to find a slot in the Derby frame. Immortality showed commendable speed and stamina to improve considerably on her Oaks’ run. She won convincingly and showed remarkable mettle to win the manner she did. Pesi Shroff has a way with fillies and he proved his own flair in nurturing his talented filly in quick time. Suraj rode a typical race allowing the filly to settle down and then keeping her fresh for the final dash, she was clearly the fastest at the business end of the race.

This was a record 14th triumph for the Usha Stud Farm. Ms Ameeta Mehra has reason to be basking in pride and glory having done immensely well in carrying on the legacy of her charismatic father Major PK Mehra, who was passionate about the Stud Farm.

“Immortality has provided sheer joy each time she has stepped on the turf. I felt this race was run clinically and every contender had a clear run which is how it should be. Immortality showed that she was superior and her finish particularly was so full of steam. I feel she will do even better over the longer trips. She got into a fine rhythm, moved smoothly and was fluent in the final run. She pulled off a classic victory in the end and this was one of the most delightful moments for me personally,” said Ms Ameeta Mehra who owns the filly along with Mrs Liane Luthria.

Trainer Pesi Shroff too was all praise for the filly saying, “She is a lovely filly and a joy to train. She progressed well after her debut run, when she won over a mile. It was at Ameeta’s persistence that we took her to Hyderabad for the Oaks there and that’s when she displayed her class although she was yet a tad immature. She has never looked back since and I am happy to see her perform so well,” said Pesi.

Jockey Suraj Narredu was beaming with joy and a touch emotional too. “Immortality performance was just perfect for the Derby and having watched her previous runs closely, I think she ran a much better race this time. I noticed she used to be a bit slow at the start and take her time to get going, but this time I had to calm her down as she was one of the quickest out. She switched off too when she was required to do so and then came alive to accelerate just at the right time. She galloped freely and I knew I had it covered as early as when we turned for home.

“It is a special joy to get my fourth success in this big event and I am grateful to Ms Ameeta Mehra and Mr Pesi Shroff for entrusting the filly to me. I would also like to dedicate this victory to my father, my uncle and my fans and supporters. I had a lot on my plate over the past few weeks, some of which was hard to cope. But I didn’t let that go to my mind however difficult it was. Immortality has provided a welcome relief along with immense sense of pride, making me feel much better now than I was, not too long ago. It evens out in the end, this is what this lovely sport does,” said Suraj Narredu.

Trainer Pesi Shroff had saddled a winner in the earlier race in Columbian (Air Support – Celebrity, Kunigal Stud) who turned in a clinical performance to score his maiden win on his second start. Jockey PS Chouhan settled Columbian in the second spot behind Ginsburg and these two were well ahead of the rest. Ginsburg tired the runaway tactics as she stole a march coming into the homestretch. She however could not sustain as Columbian loomed large and collared her approaching the distance post and then stormed ahead to score comfortably. My Treasure and keystone progressed well to rally from some distance behind to claim the minor placing.

Irfan Ghatala trained Salazaar (Burden of Proof – Saddle Star, Kunigal Stud) scored a facile victory to clinch the CN Wadia Gold Cup (Gr2). Salazaar ran well off the pace and was second last for most of the journey. Psychic Force raced ahead of Wizard of Stock coming into the backstretch and held sway until approaching the final turn. Apsara Star took over and led them into the straight but could not hold on to the lead for too long. Salazaar, with Sandesh in the saddle, cruised past Apsara Star to then draw away to zip further ahead and shut the completion out. Salazaar won by an impressive margin of close to five lengths without dropping sweat. Apsara Star did well to take the runner up slot.

Cosmic Ray (Burden of Proof – Corsican Girl, Kunigal Stud) was another Bangalore based runner who thumped the opposition to claim the Rusi Patel Trophy (Gr3). Cosmic Ray chased Victorious Sermon into the straight and then charged ahead to get past the leader with ease. Jockey Sandesh then eased the Attaollahi ward into a fine rhythm and didn’t have to press too hard, sailing away from the rest to notch up a fluent win. Flying Visit did well to finish second, while Northern Alliance rallied well from the rear to finish a notable third.

Trainer Malesh Narredu saddled a double on the big day with his Supreme Runner (Excellent Art – Keukenhof, Poonawalla stud) galloping to a convincing victory in the Sir Homi Mehta Million. Settling in third behind Hellbent and Arc De Triomphe until the turn, Supreme Runner got going approaching the distance post. By the Arc De Triomphe had a slender lead which Supreme Runner just cut down to a naught within a few strides and then kicked on gamely to speed away from the rest. Jockey Akshay Kumar eased the colt in the last few strides to win by just under two lengths. Alfayiz came with a late bid to claim the runner up berth, while Zarak finished in the money.

Malesh then saddled Giant Star (Excellent Art – Sweeping Star, Poonawalla Stud) to a thrilling last stride victory that involved five horses in a blanket finish. The race came to a boil soon in the homestretch as Exotique raced ahead to grab the lead. The chase began with Scramjet and The Sovereign Orb pushing ahead with Tigrio and Giant Star coming into contention. Scramjet had a slender advantage inside the final furlong but the rest were converging fast on him. Rays of Sun too started covering ground briskly and they were all scrambling towards the post. Giant Star, with jockey Suraj Narredu up, just managed to pip Scramjet on the post. Rays of Sun put his neck in front at the wire to beat The Sovereign Orb from place money, with Tanhaiyaan arriving with a late run to finish with the bunch.

Prasanna Kumar trained Redoubtable (Leitir Mor – Miss Mystique, Cyza Stud) made a successful first attempt on the Mumbai circuit with a strong finish over the 2400 m race.  Priceless Gold led them into the straight and was soon challenged by favourite Arcadia. Justified moved up nicely to make his bid from the outside, while Redoubtable slipped in through the rails. Arcadia was under pressure with the rider going for the stick approaching the distance post. Redoubtable then unleashed a powerful burst to surge ahead and compile a handy lead. Justified too came with a good finish, but Redoubtable easily smothered the challenge to carve out his second career win by just over a length from Justified. Arcadia ended a tame third.

Shroff signed off the day on a winning note with his ward Enigma (Phoenix tower – Maisha, Manjri Stud) scoring an impressive victory to win her maiden race on her second start. Jockey PS Chouhan settled the filly in the front bunch and made his move once they entered the homestretch.

Endeavour led them in with Desert Fire soon catching up with the leader. And before any other runner could even shift gears, Enigma flashed past them all and produced a terrific burst of speed. None could match her brilliance as Enigma drew away, making the others look pale. Enigma amassed a margin of close to seven lengths and clocked a nippy timing of 75:44 for the five furlong scurry. Desert Fire did well to hold off Super Girl for the runner up berth.