JAKE‘NOSES’ IN ON CALCUTTA MILLION 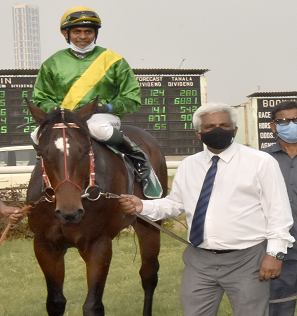 Champion trainer Vijay Singh reached a landmark half-century of winners by notching up a hat-trick on Wednesday. His winners were Ghost, Jake and Rainbow Trout. Considering that it is the shortest winter meeting of the past few decades, it was quite an achievement. The 20-raceday meeting still has two more racedays left for  Vijay to improve upon his tally. To add to that, he has had 32 second placed runners. The statistics show just how much of a one man show the season was.
The Calcutta Million saw Vijay’s three runners occupy the top three slots. The on-money favourite Jake (Win Legend-Aerona) edged out second favourite Galen by a nose. Both Suraj Narredu on the winner and Hindu Singh atop Galen went hammer and tongs in the final furlong and were locked at the wire -  but the camera gave Jake the nod.

Trainer Rutherford Alford scored a rare but lucrative double with Jinsoku (Speaking of Which-Abronia)  and Sheer Force (Net Whizz – Celtic Manor)  – jockey Ajeeth Kumar doing the honours on both. Both runners were quietly fancied by the connections and won start to finish without any hiccups. The well-planned coup was a flamboyant way for the young trainer to open his account.Kudos to him! It will no doubt be a joyful Easter Sunday at the Alford household !

Another outstation jockey to land a coup was Sameer Khan. After notching up a win on Shafiq Khan-trained Berluti (Burden of Proof – Aplysia)  in the opening event, Sameer pulled of a dramatic win astride the totally ignored Seasky(Sedgefield-Shining Force) in the Captain Courageous Handicap run over a mile. He rode a forward race and gave the on-money favourite Intellection the slip. Scarlet Witch was a notable second. The win gave trainer HS Bath his welcome first winner of the season.

Manvendra Singh-trained Estrella Star (El Johar _ Pure Distance) returned to form with a thumping victory in the six-furlong race for the Zelda Handicap. RS Bhati had her racing in mid-division for most part and changed gears smoothly in the straight to leave the field standing. The favourite Daring Heart with Suraj Narredu astride kept on daring punters to bet on her and ended up a tame fifth.

Ghost (Win Legend-Lyrical Lass) bagged the Obolensky Handicap without much ado. Hindu Singh had the colt racing third behind Valegro and Top Notch till the turning for home and fluently took over the running in the straight to win as he liked.
Rainbow Trout (LetirMor – Rainbow Queen) won a hard-fought race to lift The Brave Dancer Cup. Suraj Narredu had to peg back the persistent and much improved Shimmering Star in the final furlong. Tudor Hall was an unimpressive third and may prefer a longer trip.