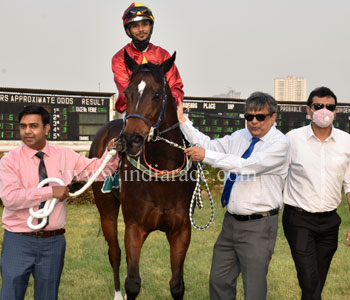 Followers of jockeys rather than horses took a drubbing on the penultimate day of the Calcutta races as champion rider Suraj Narredu drew a blank with two of his mounts finishing dead last. The feature event of the day, The Metropolitan, saw Vikash Jaiswal’s eight-year-old New England put his best foot forward and edge out Areca Legend and Prince Satsuma at the wire. Brother Vinay Jaiswal atop New England (Arazan-Autumnal) had him racing last of eight in the Class I handicap race while stablemate Amorous White called the shots. Another horse very well placed on handicap, Areca Legend, followed the pacemaker and took over the running in the straight. It was then that New England moved with giant strides to grab the honours at the post. Top -weight Prince Satsuma ran on a good third. The victory of New England was a bit of a paradox. Though Areca Legend and New England were the two runners best placed on handicap, they had no notable form to go by. Hence, they were ignored by most punters.

Earlier Vinay Jaiswal had ridden Bharath Singh-trained Agnostic ( Top Class-Kabini) to a facile triumph in the Aemilia Plate. His back-to-back wins are impressive enough to suggest that he has more races in store for him. Another Jockey to notch up a brace was Afzal Khan.

He guided Vikash Jaiswal-trained Harbour Sunrise (Strong Suit-Royal Highness) to a facile win over After Shock in the Aleksei Handicap. Afzal next rode Christopher Alford-trained Eastern Crown a well-deserved encore, defying his mere 3kg penalty. The five-year-old gelding won by a street and has been penalised 7kg for this effort.

The afternoon commenced with trainer Javed Khan pulling off a clever end-of-season gamble with Stagger (Bhati up). The filly had been covered up by the same jockey-trainer combo when she ran on Wednesday. On this occasion, she was right up there with front-running Beowulf from the word go and wore him down inside the distance. The winner is by Varenaar out of Silk Road.

Trainer B Mahesh led in his maiden winner when Portofspain (Arabian Gulf-Fairtheewell) trounced the opposition in the six-furlong sprint for the Arabian Gulf Handicap. Akash Rajput had him in fourth position while Nandini’s Pet called the shots, and released the brakes in the straight to win as he liked.

The curtain came down with the 8/1 shot Ansigar coming good in the mile race for the Astounding Handicap. Boasting of a classic bloodline (Speaking of Which – Artesia), the Christopher Alford-trained colt was gracing the wrong end of the field till heads turned for home. Thereafter, he responded well to Nikhil Naidu’s urgings and quite easily got the measure of Wandering Angel.

On the final day of the season on Friday, RCTC will be felicitating senior judge Pritish Verma for his impeccable service in the judge’s box over the past 50 years.