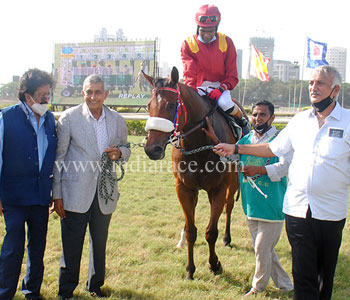 It was a day that saw a rare dominance by lesser successful jockeys and the likes of Sandesh, PS CHouhan and CS Jodha took a back seat for a change. Apprentice Kirtish Bhagat, who is improving by the day, dished out a fine hattrick from the day’s second race on and in each ride the lad showed good temperament holding his nerve in keeping the challengers at bay.

Kirtish rode out Iron Age (Strong Suit – Intrigue, Manjri Stud) to a start to finish victory to clinch the Seth Ramnath Daga Trophy, the feature event of the day. Coming into the race with two worrisome defeats, Iron Age had the spotlight on him.  He took off quickly from the gates and sped ahead to lead the field of four. Hidden Gold was a close second with Mystic Bay just behind; Silver Flames was taking time to get into a rhythm and was detached last until the turn.

Iron Age looked his old reassured self as they straightened up and Kirtish rode out confidently to stay well ahead. Neither Hidden Gold nor Mystic Bay could match Iron Age. Silver Flames warmed up and started to cover ground briskly. He could easily get past Mystic Bay and Hidden Gold, but found Iron Age too hot to handle. The Imtiaz Sait trainee was bouncing away and he scored a facile win with Kirtish easing him up in the last few strides to cruise away for his twelfth victory without any anxiety. Silver Flames did well to finish a good second.

Kirtish had to work hard to snatch a narrow win atop Pesi Shroff trained Rambunctious (Kingda Ka – Circle of bliss, Nanoli Stud) while winning the Jahangir Dubash Cup. Rambunctious chased early leader Fleur De Lys who had a substantial lead turning for home. Kirtish set about bridging the gap and was inching closer to Fleur De Lys. Speed Air moved along the rails, while Summer Knight too was making his presence felt. Fancied Shamshir Sword didn’t seem sharp enough, tailing the field by a couple of lengths all through. Kirtish was facing a strong challenge from either side from Sandesh atop Speed Air on the inside and CS Jodha astride Summer Knight on the outside. The lad stood the test and got Rambunctious going, urging the gelding hard and thwarting off both the major threats. Rambunctious won by half a length from Speed Air and Summer Knight. Shamshir Sword ended a tame fourth.

Kirtish had earlier guided Shroff trained Hioctane (Kingda Ka – Portia, Nanoli Stud) to her maiden win, starting his roll of three wins on the trot. Here too Kirtish showed good alacrity, saving Hioctane to give his best in the final furlong. Lovely Fairy led them into the straight and soon Marakesh started to apply pressure. Kirtish got Hioctane to make headway and got into a good position at the top of the straight. Marrakesh had barely got the measure of Lovely Fairy when Hioctane pounced on the pair. Hioctane accelerated well and soon sped ahead, but the job was still not done. Kirtish urged Hioctane on and the filly responded well to build a handy lead in the final furlong, which was good enough to ward off the fast finishing Memorable Moments. This was Hioctane’s first victory, her consistency finally paying off on her ninth start. Memorable Moments ended a good second and looks good to shed her maiden status in her next opportunity. Marrakesh was not up to the mark while finishing third.

Prime fancy The Awakening (Multidimensional – Winds of Fortune, Usha Stud) trained by Malesh Narredu scored a facile victory while achieving her maiden success on her third start. She also provided a winning return to jockey Yash Narredu, who was on his first assignment after a collarbone fracture resulting from a fall on the Pune track. Yash showed no discomfort and it was business as usual for the young jockey, who was looking stronger and more determined to make his presence felt after being missing the action for months. It was not the smoothest of comebacks for Yash as his mount jumped out awkwardly and he found himself at the tail end of the field soon on start. Yash showed patience and bid him time making gradual progress without hustling The Awakening at that early stage. Enjoy shot into the early lead but faded out approaching the turn.

Constant Variable led them into the straight with Count of Savoy, Arctic Bay and Emiliana ready to make a dash for it; Red Merlot made good progress from the outside. The Awakening was surrounded by horses and Yash had a tough time finding a clear passage. But he need not have worried as he skirted around horses and once he switched to the outside, The Awakening produced tremendous acceleration to zip past the fighting trio and storm away to win by a widening margin.  The Awakening was far too superior to the bunch and showed it in no uncertain terms. Count of Savoy nipped out Red Merlot for the runner-up berth, while Love Warrior ended up a close fourth.

Dallas Todywalla trained Champers On Ice (Phoenix Tower – Ageless, Manjri Stud) made an impressive debut while winning in the hands of jockey SA Amit. They were out of the gates at a fast clip, unlike Marvellous who was a touch hesitant at the jump and had to make up from the last position. Champers on Ice moved nicely throughout and had a decent lead coming into the straight. Neither Hilma Klint nor Demetrius were gaining on the leader. Nishk and Galloping Glory started to warm up while Marvellous went to the wide outside losing further ground. Jockey Amit rode well and had things in control as he kept the whip away and relied on going hands and heels all the way. Galloping Glory improved in the final furlong to take the second spot. Marvellous arrived with a big gallop, but was clearly too late. However, she did finish on well and looks a certainty, if there was one, in her next assignment.

Waheed trained Perfect Perfecto (Lord Admiral – Prophetic, San Craintes Stud) dropped a bombshell while bringing up his maiden victory on his sixth start. Jockey Shubham got straight down to business pushing for the lead early on the start. Into the straight, Perfect Perfecto had a steady gallop going leading On Va Danser comfortably with about 400 to go. Stick to the Plan made quick progress with a short burst, but failed to sustain it all the way. Victoria Peak too was right up there, but went out like a whimper. Streek lit up a tad of hope, but just could not make an effective dash. It was Perfect Perfecto all the way who outpaced his rivals to win by a clear margin, from Stick to the Plan and On Va Danser.

Who Dares Wins (Win Legend – Eastern Summit, Dashmesh Stud) was another won to taste first blood on his eighth start. He got a little scare though towards the last couple of strides, but he held on alright. Trinket led them into the homestretch and was soon challenged by Sufiyah. Just when it looked like Sufiyah would take over and dash ahead, the eyes shifted to Adhiraj Jodha’s ward Who Dares Wins galloping resolutely on the outside. IN quick time Who Dares Wins, with Nirmal Jodha in the saddle, stormed ahead and sailed away to a sizable lead. He looked home and dry for the moment, but Gutsy Girl came alive with less than 100 m to go. She came dangerously close but the winning post saved the day for Who Dares Wins who clinched it by a short head. Gutsy Girl was a gallant second, while Multi Moment finished in the money.

The last race of the day was an exciting three way finish with AM Jadhav trained Jetfire (Total Gallery – Daffodils, Bishan Stud) snatching victory on the last stride. Oui Sauvage shaped well approaching the distance post as he had put main danger Cellini out of contention and was galloping well towards the winning post. Judy Blue Eyes started to draw closer with a furlong to go and she was indeed catching up. Jetfire, partnered by jockey PP Dhebe, also arrived with a hot finishing run to join these two. The trio dashed past the post together with Jetfire getting the verdict by a short head from Oui Sauvage, with Judy Blue Eyes just a ‘nose’ further behind. Arc Shine completed the frame.

For the professionals, apprentice jockey Kirtish Bhagat was the star of the day with three winners, while trainer Pesi Shroff saddled a double.