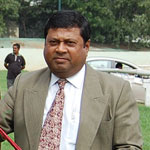 Indiarace caught up with L.D'Silva who has been in the field of horse racing for well over three decades. 'Leo' as he is popularly known has carved a niche for himself and has made Hyderabad his bastion. Mirror Image had a tete-a-tete with this great lover of horses.

Mirror Image : How did you get into this profession ?

L.D'Silva : Horses always fascinated me. I got attracted towards this sport and I am a great lover of horses.

M.I. : Tell us about the start of your career and your early days.

L.D. : I started in the year 1973 as an apprentice with R.W.I.T.C. under Maj.V.M.Lad. It was a hard struggle initially with success not coming my way, until I shifted to South (Bangalore) in 1979. In my first season at Bangalore I rode nine winners. The following season at Mysore, as a half jockey I fought out with Jagadish for the championship but didn't succeed. Those days' jockeys were classified as half jockey and full jockey.

M.I. : How successful were you as a jockey.

L.D. : I have ridden over 750 winners in my career as jockey, spanning over a period of almost eighteen years. I used to ride at Bangalore and Bombay before I settled down at Hyderabad. I have ridden at all the race courses in India except Ooty.

M.I. : Highlight of your career as a jockey.

M.I. : When did you take up to training horses and how was the transition.

L.D. : I took up training in the year 1991. I got a trainer's license immediately at H.R.C. I am always grateful to Mr. N. N. Reddy and the Stewards of The Hyderabad Race Club for reposing their faith in me.

M.I. : How have you performed as a trainer ?

L.D. : Ever since I started as a trainer in 1991 I have taken the championship trophy every Monsoon Season till 1997. From 1997 onwards I have topped the tally in both Monsoon and Winter at Hyderabad. It is only the last two winters I have lost out to Prasad Raju.

M.I. : A few of the best horses you have trained.

M.I. : Notable victories as a trainer.

L.D. : During the very first year as a trainer Solferino won the Colts Trials and the Leger for me. Shelly Green has given me the 1000 guineas, Coral Gables won the 2000 guineas, Annapolis the Oaks and De Venchi Rose has given me the Fillies Trial Stakes. I have not won a Derby till now.

M.I. : You have ridden for many trainers as a jockey and now you are on the other side giving instructions to riders. How do you rate the trainer / jockey relationship?

L.D. : My rapport with my trainers used to be very good. I used to give a frank opinion after work or a race to my trainers. We would share the responsibility equally and success was always due to the team work. If a horse performed badly, as a rider I would take equal responsibility for it and not put the blame on the trainer. Nowadays the scene has changed to a great extent. Most of the upcoming boys don't want to accept when told that they could have ridden better or their flaws in riding are pointed out. The profession is getting commercialized to a great extent.

M.I. : Your advice to young riders.

L.D. : Always share the responsibility with your trainers in both victory and defeat. Some of the riders have developed the habit of punching their fist in the air as they pass the winning post,whether it is a Class I or a B class race. This could be dangerous to them as well to the others on the race track.

M.I. : The prices of yearlings have been sky rocketing these days. What have you to say about this?

L.D. : The prices are rising and at the same time most of the owners expect instant result. After purchasing expensive horses the owners expect to win big races. If a horse doesn't perform, then the fingers are pointed straight at the trainers by the breeders, the owners and their coterie.

M.I. : You regularly take your horses to Bangalore during Summer. Is there any particular reason for this?

L.D. : Hyderabad is too hot during Summer. The horses relish the weather at Bangalore. They tend to eat well and put on condition, they muscle well at Bangalore. All in all they return a transformed horse altogether.

M.I. : Thank you Leo for sharing your experiences with our readers and we wish you more success in future.