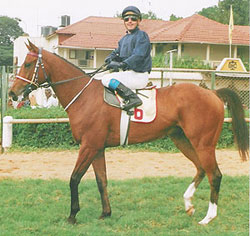 Democraticus (S.Fargeat up) winner of the Harvins Bangalore 2000 Guineas (Gr.2)

Padmanabhan trained Democraticus scorched the turf en route to slamming the opposition in the Gr.2 Harvins Bangalore 2000 Guineas on Saturday. Luck had deserted the immensely talented son of Royal Kingdom as he had been plagued by one problem or the other, including that of poor jockeyship which cost him a certain plum at Mysore. He looked a cinch for the Mysore 2000 Guineas but then he ended up with a hoof injury which kept him out of the Derby. As if to compensate for not fulfilling that promise, he showed up for the 2000 Guineas prep race in great condition and translated those looks into a smashing performance which immediately gave him the tag of being the very best miler in the country. The win in the Harvins Bangalore 2000 Guineas thus was considered a formality and his paddock appearance too served further to cement that impression. Jockey Samuel Fargeat had no hesitation in taking charge of the proceedings from the start to win from end to end, with something to spare, in a smart time. Flashing Star, the eternal bridesmaid, once again finished second best ahead of Colour Bearer while Mysore Derby winner Psychic Strength seemed to have left everything on the sand track itself as he fared poorly, finishing down the field. Democraticus became the second son of Royal Kingdom to win a classic from his relatively small first crop and a classic success thus was recorded at long last by the Equus Stud Farm. In the form that he is in, Democraticus is capable of being the best miler in the country and as such, his participation in the Indian 2000 Guineas would have been the logical choice. However, the connections have wisely or unwisely decided to skip the Guineas and go straight for the Indian Derby. Whether Democraticus who is gifted with such speed can last out the extra four furlongs remains to be seen but if he does, there will be none to catch him! It turned out to be a great day for Padmanabhan as apart from the Guineas winner, the trainer saddled three other winners including first season runner Appreciate, Confluence and Aashirwaad. The other highlight of the day was the splendid performance of jockey Appu who despite his losing his stirrup irons, drove out the well fancied Bumper Prize to victory. Bumper Prize brushed against the rails at around the 900 metre marker and the right stirrup broke, forcing Appu to take out the left leg also from the stirrup. Appu did not panic and he drove out the horse by pushing and judicious the use of whip. He also managed to correct the drift and steered the fancied runner to victory at considerable risk and also was successful in pulling up though there was a moment of anxiety as the horse veered out dangerously. Appu deserved all the praise for his commitment as also the courage because most jockeys would have given up in this sort of a situation. Jockey Mallesh Narredu was associated in three of the success of Padmanabhan. Appreciate, despite the wide outside draw, managed to stay a handy second behind Lyocel and took charge in the final furlong to win comfortably. Lyocel, who expended considerable energy while being led to the starting gate, nevertheless ran a noteworthy second and has advertised her readiness to strike. This full sister to the talented Laguna Blue is indeed promising. There was strong support for Shes A Melody but the full sister to Hesperus could not make an impression on the front runners. Red Cloud ran a poor race. Confluence won the 1800 metres A.R.Keshava Mudaliar Memorial Plate in convincing fashion from Royal Scandal and Shaolin. Confluence moved from behind to win in the manner of a good horse and on the basis of this performance, the daughter of Placid can make her mark in the Oaks. Divin Lumiere once again let down her supporters with another listless performance. Aashirwaad had it easy, beating his nearest challenger Razpazazz with a fair degree of ease. Trainer Gregory Sandhu has been going great guns. After making it big at Mysore, he has been a force to reckon with even in Bangalore as he saddled two winners on successive days. Connaught Square was backed to the exclusion of his rivals in the 1400 metres Royal Calcutta Turf Club, a race for horses rated 40 and above, and the son of Flitch bolted in, well clear of Baracudda. Fancied Nordic Star ran below par.