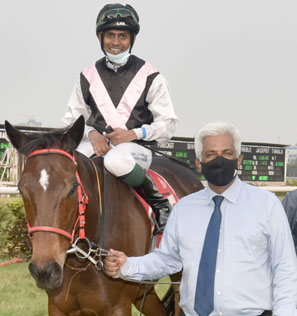 The curtain came down on the Calcutta Cold Weather Season with champion jockey Suraj Narredu riding four winners to give his fans much to cheer about. His winners were Bath-trained Nova (7/10),  Vijay Singh-trained Oasis (5/1), Mahesh-trained Barack (3/1) and Vijay Singh-trained Rainbow Trout (5/2) in that order. The last named lifted the Dandified Cup in style with Suraj taking the shortest route home after lying fifth of seven till heads turned for home. This was the fourth consecutive win at this centre of the five-year-old mare by Letir Mor out of Rainbow Queen. Earlier Vijay had led in three-year-old colt Oasis who won the Club Fenicia Cup from Robinson Crusoe fairly easily. The favourite Appreciate ran a poor third.

HS Bath-trained Nova (Letir Mor-Sorrento Steel) had lost narrowly last time out to Estrella Star. On this occasion, she quite easily got the measure of Isle of Skye with a furlong less to run. Another runner who made amends for his earlier defeat was six-year-old Barack  (Multidimensional-Fond Fantasy). The Mahesh-trained runner won the seven-furlong race for The Sunray Handicap as he liked. Malwa with Akshay Kumar in the saddle was a tame second. Akshay drew a blank on the day. This centre has not been a happy hunting ground for him.

The afternoon commenced with an unfancied runner occupying the winner’s berth. Vikash Jaiswal-trained Ashwamegh with Vinay Jaiswal in the saddle edged out Tomorrow Forever by the proverbial whisker. Sired by Lucifer Sam out of Loveatfirstsight, Ashwamegh came with a late run to sail past favourite Bemused in the straight before locking horns with the runner-up who was impressive in defeat.

Shyam Habbu-trained Yahalla (Arazan-Mine Forever) completed her third win of the season when she won the upper division of the Eagle Pines Handicap in the hands of RS Bhati after a brief tussle with top-weight Sitara. The lower division of the race was bagged by Manvendra Singh-trained Estrella Star (El Johar-Pure Distance) who notched up his fourth win of the season without much ado. With the victory, jockey Shezad Khan broke his duck for the season. It’s unfortunate as he was a promising rider at one stage of his career.

The season drew to a close with Javed Khan-trained Stagger (Varenaar-Silk Road) producing an encore in apprentice Tejeshwar’s hands. The filly did face a bit of traffic problem over the sprint but the apprentice did well to show her daylight and she put her best foot forward in the nick of time. Tejeshwar however failed to bag the “best apprentice” award for the season which went to Sujit Paswan.