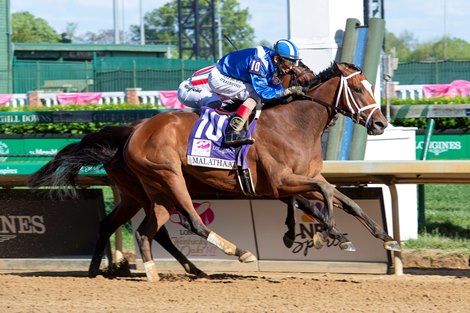 Malathaat strides out at the finish @Photo: Anne M. Eberhardt

Less than a year removed from a Longines Kentucky Oaks (G1) run under COVID-19 protocols in early September, the 2021 running returned to its rightful spot the day before the First Saturday in May at Churchill Downs—and Malathaat  delivered a performance worthy of its lofty status.

After a thrilling stretch duel, Shadwell Stable's daughter of top sire Curlin prevailed over Klaravich Stables' Search Results  by a neck to win the $1.25 million race.

Malathaat, sent off as the 5-2 favorite, secured her fifth win in as many starts April 30. Will's Secret  finished third, 2 3/4 lengths behind Search Results, the 5-1 third choice.

Trained by Todd Pletcher and guided to victory by John Velazquez, Malathaat completed 1 1/8 miles in 1:48.99 on a fast track.

The poignant win came a little more than a month after the death of Shadwell owner Sheikh Hamdan, who passed March 24 at 75. Hamdan's pursuit of excellence in racing was global in reach, including operations in Europe, Australia, South Africa, and North America, where his Shadwell Estate Co. is a major landholder in Central Kentucky. Rick Nichols, general manager and vice president of Shadwell, worked for Hamdan for more than 35 years.

"A million things have been going through my mind," Nichols said after the race. "We heard that there were several people in Dubai that stayed up late hours to watch. You know, losing the boss the way we did and him coming off a great year—he was the leading owner in Europe last year. And we have many good horses in our stable this year. And having Malathaat to step up and give him an Oaks win is more than we could ask for.

"Sheikh Hamdan, to racing, was such an influence, in England, in Ireland, in the U.S. He was so supportive," Nichols continued. "He loved the sport. Even in his advanced years, he didn't lose his passion for it. But personally, June 1st, I have worked for him 36 years. He was a very, very close friend. He was a lot of times a father figure, sometimes like a brother, sometimes like a friend. But he was always the boss. I loved him dearly. He'll always be missed."

"She has an innate ability to target a horse and want to go by it," Pletcher said of Malathaat. "We've always felt she was a special filly from day one. We've been blessed to have the opportunity to train her. She's so professional."

Pletcher praised Velazquez for overcoming a bumpy start that could have left Malathaat at the back of the pack.

"She didn't get away real cleanly. She got bumped around at the start, and I think Johnny made a key decision recovering that position heading into the first turn and that made a huge difference," he said.

With reduced capacity restrictions amid COVID-19, attendance at Churchill Downs was 41,472 for the Oaks. Most took in the good weather while watching the races maskless, and were treated to the sixth-fastest running in history.

Following the scratch of Ava's Grace  two days before the race, 13 sophomore fillies broke from the gate. Travel Column  got the early lead, running the opening quarter in a demanding :23.60. Velazquez settled Malathaat in fifth position, traveling a bit wide but clear as the field went into the first bend.

"She didn't get away the best, but I got a spot with her," Velazquez said.

The opening half-mile went in :47.47 and six furlongs in 1:11.31 as Travel Column continued, but Malathaat inched closer, and so did Search Results and Will's Secret.

The top two engaged in upper stretch, and drew well clear of their rivals in a thriller to the line. Malathaat got the upper hand at the eighth pole, but Search Results was unwavering.

"When I turned for home I had a target to send her after," Velazquez said. "We got up next to (Search Results) and my filly went by. Then she waited a bit; she does that. The other filly came back but I could tell I was still in control. I never thought I was going to do anything but win."

"She ran her heart out. She left it all out on the track," Search Results' trainer Chad Brown said. "I'm so proud of the horse. I can't ask for a better effort."

Malathaat made her debut last October going seven furlongs at Belmont Park, then sparkled in the Nov. 6 Tempted Stakes at Aqueduct Racetrack, drawing clear by 7 3/4 lengths in the one-mile event with Kendrick Carmouche aboard. She later annexed Aqueduct's Demoiselle Stakes (G2) under Velazquez. Her 3-year-old debut in the April 3 Central Bank Ashland Stakes (G1) at Keeneland was delayed a week by Hamdan's death.

"We angled her toward the Gulfstream Park Oaks (G2), but when Sheikh Maktoum (Sheikh Hamdan's father) passed years ago, Sheikh Hamdan called me and said, 'Please don't run any of our horses during a 10-day mourning period,'" Nichols said last month. "So, I asked (trainer) Todd Pletcher, 'What about the Ashland?' He said, 'That would be great.'"

"She was always Johnny's filly," Pletcher said of the return to the Hall of Fame rider. "With the COVID situation over the last year, I said earlier this week, I don't think that I've had more jockey changes in the last year than in the last 20 years combined. There are so many different things... Johnny was supposed to ride her in the Gulfstream Park Oaks, and then he was committed the next week to ride Medina Spirit at Santa Anita, so he wasn't available for the Ashland.

"Early in the pandemic, the testing restrictions and travel restrictions... there were a lot of scenarios where Johnny wasn't riding a horse for us when he normally would have, but a lot of that were events that were out of our control. After the Ashland, Rick and I talked and we felt like she was Johnny's filly all along."

Pletcher's first Kentucky Oaks score came in 2004 with Velazquez aboard Ashado . Pletcher has also won with Rags to Riches  (2007) and Princess of Sylmar  (2013).

The winner was bred by Barbara Banke's Stonestreet Thoroughbred Holdings and is out of Stonestreet's stellar grade 1-winning mare Dreaming of Julia , who ran fourth as the favorite in the Oaks for Stonestreet and Pletcher in 2013.

Stonestreet was represented by two homebred runners in this edition: Clairiere  (4th, out of Cavorting ), and Pauline's Pearl  (8th, out of Hot Dixie Chick ).

Stonestreet entered Malathaat in the 2019 Keeneland September Yearling Sale as part of Denali Stud's consignment and Nichols snapped her up for $1.05 million for Sheikh Hamdan's Shadwell Estate Co.

"I couldn't believe they even considered selling her," Nichols said. "The main thing is, I'm glad we got her. She was a gorgeous yearling filly and that was the last year Sheikh Hamdan was here for the sales. That year we really focused on getting some well-bred fillies, and she fit that bill."

Malathaat's Oaks score ranks up among the top U.S. wins for Shadwell Stable, which include the 2006 Belmont Stakes (G1) with Jazil  and the 2006 Breeders' Cup Classic Powered by Dodge with Horse of the Year Invasor. Other Breeders' Cup scores came with Lahudood  (2007 Filly & Mare Turf, G1T) and Tamarkuz   (2016 Dirt Mile, G1).