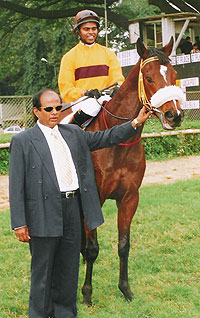 Southern Empire (B.Prakash up) winner of the Topmost Cup, being led in by trainer Mr.S.Ganapathy

The Topmost Cup became a no-contest as two of the fancied runners who were expected to stretch Southern Empire lost ground at the start and became no-hopers. Not that it would have stopped the full brother to the celebrated classic winners Smart Chieftan and Classical Act from making an impressive start to his career on Friday. Southern Empire won well without coming under any pressure and this handsome son of Placerville has a great deal of potential that is sure to be exploited by trainer Ganapathy. There was inspired support for Auchinlech, half brother to Adolfito and as such, Southern Empire went into the race at a good price. The paddock looks supported Southern Empire’s cause but in an information-oriented betting, such niceties will always be ignored. When the starter dispatched the field, there was heart-break for the supporters of Auchinlech who lost all his chances at the gate itself, making one wonder whether Gallagher had lapsed into his old habit. Rameses too was sluggish but quickly improved to be within striking distance of the front-running favourite. Once into the straight, a mere push from jockey Prakash was good enough to get Southern Empire into top flight and the favourite bounced away from the hard ridden Rameses while Auchinlech was a dismal third. Gallagher made amends while driving out Cedros to a narrow win over That’s The Touch in the mile-long Rohini Cup. The two market fancies fought out a thrilling battle in the final 100 metres but Cedros managed to stick his neck out at the finish. Go For Gold galloped in snatches to finish third. Lanark ran on to finish fourth. Blairgowrie had failed to live up to the promise of her debut win and the filly had let down a number of times. Now in the charge of Gregory Sandhu, who is on a song, Blairgowrie cantered home in the Pootannah Memorial Plate (Div.II) at the expense of Eskimo Boy and Lyricist. The heavily supported Vishnupriya was never in with a chance, finishing a tame fourth. Now that Blairgowrie has regained her winning form, she can repeat. The upper division of the race was claimed by Santosh Rao’s Golden Venture who appears to be a late-bloomer. The son of Ajaad has been on the upgrade and came through the middle to win by a whisker from a late-finishing Thursday Nite. Padmanabhan trained Dingle had no worthwhile opposition to take on though the inspired support on Force Furor ensured that the favourite ran at a decent price. Dingle had no difficulty in checking in well clear of the second favourite. Force Furor had a troubled passage early on as Dingle cut across from the outside draw but this did not make a material difference and as such the objection raised by jockey Suraj Narredu against Srinath was overruled. Aspen Bay, who had served notice of an early success by her eye-catching second in her last essay, had no difficulty in winning comfortably from Wizzy Noise who was strongly supported to pull off an upset. Maha Rani too was favoured to win but the four-year old filly made no show. M.P.Mahaesh trained Magical Ecstasy had it easy in the lower division of the Honnovar Plate, getting the better of front-running Cincinnatus in the final stages of the race. A three-horse photo-finish ensued in the Saddle Up Plate where Indian Ocean necked out heavily supported Carigielaw and Big Thrillz. All these horses received support in the ring and Big Thrillz who led all the way, having got too keen at the start because of the use of the blinkers, slackened close home. Carigielaw picked up momentum but was done in by the finishing burst of Samar Singh trainee Indian Ocean.