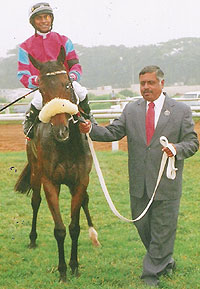 Tribal Fantasy (Suraj Narredu up) winner of the Bangalore Turf Club Trophy being led in by trainer Mr.Puttanna

As expected, Puttanna trained Tribal Fantasy won the Bangalore Turf Club Trophy which featured Saturday’s races, with consummate ease from Opera Queen. The daughters of Tecorno fought out the issue, with favourite Tribal Fantasy getting stronger at the finish. The temperamental Tribal Fantasy appears to have matured and did not throw tantrums while being led to the gates or while being stalled. Opera Queen had beaten Tribal Fantasy on the last occasion but with the scales tilting decisively in favour of the latter, the terms of the race decided the fate of the race. The most disappointing performance came from another Puttanna ward Taurian who ran dismally and finished down the field. After racing behind the front-running Opera Queen, Suraj Narredu pushed Tribal Fantasy to the front in the final furlong and the favourite bounced away to win comfortably. Splendid Smith struggled to pick up momentum and stayed on in the third place while top-weighted Forever Elegance who ran detached from the field till the final bend, flew home to be a close fourth. Money came in pouring on Ganapathy trained Smart N Unique in the 1200 metres Karnataka Rajyotsava Trophy, a race for horses rated 30 to 45 but the son of Placerville was out sprinted by Florican who moved from the wrong end at the bend, to win with a great deal of comfort. Nothing is going right for those who have been putting faith in the gold and brown brigade as they seem to be happy playing truant, displaying a clear lack of will and scant disregard for public expectations. The stiping and stewardship is also at an all time low. Our Lancer was backed to the exclusion of all his rivals in the 1400 metres N Wood Memorial Plate as the odds on Star Distinction drifted out alarmingly. Star Distinction made no show and was a lost cause from the time the odds opened in the ring to the time the race took a serious turn on the track. Our Lancer shot through an opening along the rails and went away for a comfortably win over a late-finishing Habat and Superestrella who was poorly placed to make a mark. Though Firedoro was running after a long lay off, she was backed spiritedly and the flow of money was in tune with the shape of things to come. The Irfan Ghatala trained Firedoro had the race sewn up from the start and checked in clear of Gem of A Lady who was in hopeless pursuit. Ganapathy’s Birthday Star was backed spiritedly though the trip was reckoned sharp by those who go by the pedigree. Birthday Star is a full brother to Indian St Leger winner Warsaw Pact and thus the public expectations that the son of Razeen could sprint went awry as Dominic trained Born Free took off from the gates and there was no danger of even the filly’s shadow being caught up by the favourite. M P Mahaesh trained Most Convincing whose progress had been halted due to a stifle problem, came good against modest opposition when Srinath drove home the son of Steinbeck to contain the challenge of Limekilns. First Trick last all her chances at the gate itself. Samar Singh brought off a well planned coup on Susanita. The temperamental daughter of Burden of Proof was subjected to steady preparation and obliged at good odds though at one time, she seemed to be letting down huge expectations. Fantasy Moon had taken charge with Susanita not picking up momentum but the fancied runner changed gears in the final furlong to finally win convincingly. Soul Search once again belied expectations. The well backed Fashion Verdict from trainer Loknath’s yard readily won the Kumararajah M A M Muthiah Trophy. Visiting French jockey C Stefan drove out the favourite in the middle of the track to contain the challenge of Solar Crystal who was shaping to win. Rare Ivory was backed with conviction to topple the favourite but the grey was not up to the task, ending up a tame third.