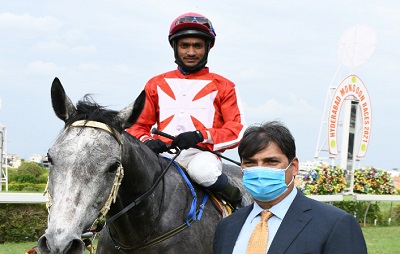 Alluring Silver (Leitir Mor – Allure) overcame a patchy finish and gave jockey Akshay Kumar a hard time in the saddle before finally craning her neck to peg back a fiercely fighting Bisate, to land the spoils and bag the prestigious Nizam’s gold Cup (Gr2).

Local contender Bisate, confident from her last start victory a week ago, darted to the front soon on entering the backstretch and made her own steady pace. North Star settled behind Bisate with Alluring Silver about two lengths off in third. Salazaar settled in fifth and was travelling well right through.

Bisate came into the straight with a handy lead and North Star found the going tough, although he didn’t fall back by much. Salazaar made his move along the rails while Alluring Silver moved to the outside. Bisate kicked on and stayed ahead as they passed the 400 m mark. Alluring Silver came under pressure when asked to quicken and the filly started to drift out at the crucial stage. Jockey Akshay immediately switched his whip but Alluring Silver kept veering out. Akshay then alternated between striking the filly and then pushing hard to get into her stride.

Meanwhile, Bisate was shaping well to last it out all the way, as Salazaar was not picking up speed fast enough to bridge the gap which was just under two lengths. Akshay and Alluring Silver finally came to terms and got down to business in the last few strides. Alluring Silver changed gears and made a terrific dash in the final fifty to get to the wire in the nick of time! The two fillies finished wide apart and Alluring Silver stamped her first win on the Hyderabad turf in a thrilling fashion.

Bisate raced gallantly and stayed the distance of a mile and quarter well. She did well considering she was going for it from the early stages. Salazaar disappointed as he ended a tame third.

Scramjet (Air Support – Scarlet) trained by Prasad Raju was hard-ridden by jockey PS Chouhan to snatch a last stride victory, shocking Lagos on the post. Lagos had done all the hard work, racing to the front soon on start and maintaining a steady hold right through until the final stride.

Lagos had a useful lead coming into the straight. Chouhan switched Scramjet to the outside and went about in chase of the leader. Xfinity could not muster much speed and the two in front were stretching further away. At the distance post, it was a clear fight between Lagos and Scramjet with the others out of the reckoning. Lagos fought hard to stay ahead; however, Scramjet caught up with the filly and managed to pip Lagos on the post. Lockhart improved positions and did well to finish in the money.

Trainer Ananta Vatsalya had prepared his ward Muaser (Oiseau De Fue – Ulrika) on the morning track and the filly had shown improvement over her last season form. Installed the tote favourite, Muaser justified the faith of her supporters as she galloped away to score her maiden win on her seventh career start. Jockey Nakhat Singh had some anxious moments as he was taken out by the erratic Neffereti soon on turning for home. He did well to speed ahead to get past and surge ahead to challenge NRI Sport for the lead. Muaser quickened well thereafter and raced ahead to post a comfortable victory. NRI Sport found the winner too good and had to settle for the runner-up berth. Wallop and Gallop improved to finish a close third.

Jean Lafette was installed the hot favourite for his forward run early this season and the benefit of the run got her huge support. However, she let down her followers with a rather dismal performance as she could not pick up in the homestretch.

D Netto trained Hard To Toss (Green Coast – Methodical) led from the start and was ridden hard-held by jockey Ashhad Asbar once into the straight. Jean Lafette moved to second along the rails, but failed to quicken. Hard To Toss lived up to his name and galloped gamely, staying well ahead until the distance post and then stretching further ahead to pull off a facile victory. Jean Lafette could not even retain the second position as Special Effort beat her for the runner-up berth close home.

Just Incredible (Sedgefield – Blitz Kiss), from the stables of Sreekant, scored an exciting victory in a photo-finish in the hands of jockey BR Kumar. As they took off from the gates, Lifetime went into the lead and stayed ahead well into the straight. The race got to a real boil as a bunch of horses started to progress at a brisk rate. Lifetime was struggling to survive, while Fashion Universe, Flying Jet, Just Incredible, Amyra and Moringa all were racing almost abreast. Even with about 100m to go, it looked like anybody's race.

Just Incredible had a slender lead as he got past Fashion Universe. Moringa weaved his way between horses and raced on the outside, while Flying Jet was trying to make his presence felt along the inside. Moringa was the fastest to finish, but Just Incredible had that wee bit of cushion that held him in good stead as he nosed the wire right on time to get the race from the fast finishing Moringa. Fashion Universe ended a close third.

Trainer Sateesh saddled rank outsider Mark My Day (Crimson China – Amazon Sky) proved a big money spinner that fetched rich dividends of over 20 times! Mark My Day led the field home and was ridden hard all through. Guest Connection moved to second and then started to inch closer to the leader. This duo raced well ahead of the rest. The finish was not the smoothest as both the horses did not keep a straight course. There was some jostling too in the dying moments of the race as Mark My Day held on by half a length. Jockey Zervan took an objection against jockey BR Kumar, which was overruled. Siyavash ended third a good five lengths behind the pair. Favourite By the Bay simply could not raise a quality gallop and finished off the frame.

Alluri’s Pride (David Livingston – Musk Rose) carried top weight and etched out a narrow victory in the hands of jockey Akshay Kumar. Arcadian Angel bowed out after leading them into the straight. Soon Berkeley assumed charge and sped ahead. Alluri’s Pride progressed steadily and joined Berkeley inside the final furlong. They fought hard with Berkeley not giving up, while Alluri’s Pride looming large on her rival. Alluri’s Pride finished on better to win by half a length. Berkeley did well to finish a close second, while That’s MY Speed improved well to finish in the money.

For the professionals, trainer Sreekant saddled a double, while jockeys Akshay Kumar and BR Kumar scored a double each.