Laguna Blue gets his due 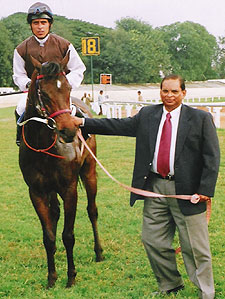 Laguna Blue (R.Marshall up) winner of the Abbey Falls Trophy being led in by trainer Mr.Inayathulla

Inayathulla trained Laguna Blue finally got his due as he won the 1200 metres Abbey Falls Trophy, the feature event of Friday’s races. The son of Ajaad had compromised his chances of winning as the trainer had done the folly of running him in a terms race without exploiting him in handicap races. As such, Laguna Blue who was runner up to River God last year in a terms race, had received such a penalty for the effort that it took one year to come to the mark where he could make his presence felt. With fancied Amatol running below par, the task of Laguna Blue became easier. Amatol started off as the favourite but the drifting odds and the inspired support on Laguna Blue gave indication to the shape of things to come. In the event, Amatol who graced the wrong end of the field, struggled throughout and was destined to finish dismally. Laguna Blue, who was racing within the striking distance of the front-running Gem, took charge on turning for home and went away for a fluent win. Netstar and Splash of Clash took the second and third berth on the frame. The well-backed Illusive Lady was guided to a fluent win by jockey Srinath. Laughing Wild had the first run on his opponents and had a good break over the rest. But Srinath timed his challenge to a nicety on Illusive Lady who finished with a powerful run to surge ahead of the winner quite easily, the margin of victory not highlighting the superior quality of the win. Copper Bracelet nosed out Proud Tradition for the third place. For sheer fitness, Mister Elegant stood out in the 1100 metres Trombay Stakes and the son of Placerville had no problems in giving a thrashing to his rivals in the race meant for juveniles. Diamond Hunter needed this run badly and did not have the fitness to make a mark. Opera Princess showed good speed but found the winner too good while Amazing Look took the designated third place. Winning a double has become par for jockey Suraj Narredu. Suraj had no difficulty in steering favourite Musical Signature and Dancing Duke to victories intheir respective races. The favourites had only meek opposition to contend with. Arjun Mangalorkar trained Liberal Dancer had run behind some good horses in the past and as such, he had better credentials to win the 1800 metres Kudremukh Stakes except that he was going into the race after longish break. But the lack of a run did not hurt Liberal Dancer’s chances as he bolted in several lengths clear of Rare Talent and Dangerous Diva who made no impression. Jockey Prakash on Spirited Commander was not inclined to cause any flutter either. Star of Lords had failed as a favourite in difficult underfoot conditions only the previous week. The son of Concordial made amends with a fluent win in the concluding race of the day, easily accounting for the well fancied Janasheen. Visiting French jockey Stefan thus had a winning start to his stint in Bangalore.