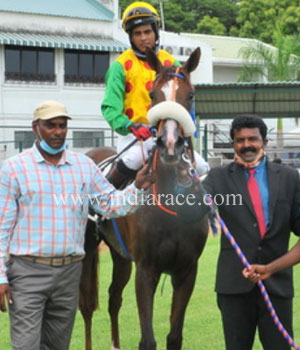 Sweet Fragrance (Sedgefield – Friendly) trained by P Krishna was ridden confidently by jockey Ashhad Asbar to victory, her first on her sixth start. Asbar let the three year old filly do her own thing initially and settled her closer to the rear of the bunch for most of the seven furlong race. Proposed  was hustled to take over the running and had Mujar, Amber Lightning, Mystical Magician and Amarone close behind, with Sweet Fragrance further behind.

Proposed led them into the straight with Amber Lightning going about her motions. Mujar was right there but failed to quicken. Sweet Fragrance had travelled well all the while and Asbar opened the throttle to which Sweet Fragrance responded splendidly. She picked up speed and cruised past the front runners approaching the distance post. She was far too quick in her finish and rolled away to score an emphatic victory, sparing two-and-half lengths at the winning post. Mystical Magician fought hard and managed to pip the long-time leader Proposed for the runner-up berth. Proposed, over a shorter sprint, could put up a better show.

Futani trained Wakeful (Net Whizz – Repique) yet again produced a winning turn of foot, outpacing her rivals without dropping sweat. She took off well from the gates and galloped at a good clip. She had a big lead coming into the straight with Celeritas warming up a good six lengths behind Wakeful. Fast Car and Mon General too were alongside Celeritas but none could match up to Wakeful. Jockey DS Deora had little to do as he sailed past the winning post for his second win on the trot. Celeritas could only manage to cut down the margin slightly, finishing second by just under four lengths. Lordship improved positions to pip Mon General for the third spot.
Popular fancy Emelda (David Livingstone – Illaunslea) was quick on the jump and led the closely huddled field with Shalem joining the leader and the rest following close behind.

Emelda wrested the issue at the turn and then accelerated away from Shalem adding distance with every stride. The B Suresh trainee galloped on gamely to stay clear of the rest, winning it by two-and-lengths. Renegade ended a clear second, while Shalem just about managed to finish in the money, holding off the fast finishing Eagle Prince.

Manzoni (Multidimensional – Five Satins) finally opened his account after a long wait, achieving his maiden success on his 21st attempt. Manzoni was in the mid-pack as Full Bloom was in the lead with Mighty Princess on her haunches. Apprentice jockey HM Akshay fell off Mighty Princess just before the turn. Fortunately, he escaped unhurt. Manzoni had to race ahead of the rider-less mare and jockey P Vikram managed to do that easily. The McKeown trainee then quickened well to surge ahead and kicked on fluently to win convincingly. Asian Empress tried hard and gained on Manzoni but only enough to cut down the margin to just one length. Chaitanya fought off Glorious Victory for place money.

Ramanathan trained Street Cat (Becket – Desert Realm opened out a short but effective burst of speed, enough to land her a thrilling victory in a blanket finish involving four other runners. Driftwood Pacific was in front as they turned for home, hotly chased by Pragmatic. Street Cat was in third not too far away. Fantastic Hit recovered from a rather tardy start to make a quick headway soon after the turn. At one point Fantastic Hit did raise hopes as Driftwood Pacific looked vulnerable as he was not exactly accelerating away. Pragmatic was putting pressure on the leader, when Fantastic Hit and Street Cat put in their might in the final furlong. Street Cat, with Sai Kumar in the saddle, made a sudden dash that got her to surge ahead and carve out a narrow 3/4L victory over Fantastic Hit. Driftwood Pacific held on to take the third spot ahead of Pragmatic. Azeria was held along the rails and did not get a clear run. She didn’t really have the luck of the race, yet finished a short-head behind the fourth placed Pragmatic.

R Foley’s Bohemian Grandeur (Saamidd – Shivalik Sunrise) did exactly shoot out of the gates, but made a quick forward move to be well in touch with the front runners within the first couple of furlongs. At the turn, Protea and Break the Silence were disputing the lead and they were joined by Bohemian Grandeur as they wheeled around the corner.

Bohemian Grandeur shot ahead past the duo. Protea was hard-ridden to stick around as was Break the Silence. Bohemian Grandeur was marching on and seemed to have the race sewed up, when Carnoustie produced a dazzling finish. Within strides Carnoustie had beaten the rest and was about to pounce on the winner when the winning post arrived a touch too soon for Carnoustie. Bohemian Grandeur had just made it in time to carve out a narrow half-length win. Carnoustie was a tad late, but with a finish like she produced, she promises to make amends soon. Break The Silence held on to take the third spot ahead of Protea.

N Rupa trained Beauty of the Turf (Corporate Jungle – Supernova) thrived with the five-kilo allowance claimed by her rider Sah Farid Ansari and made it start to finish adding to her solitary win thus far. She had to fight all the way though as favourite Uncle Sam was right next to her for the length of the homestretch. The duo battled hard and were stuck together with Beauty of the Turf having a very slight upper hand. Beauty of the Turf showed girt all the way to pull it off by just half a length, while Uncle Sam went down fighting. Sifan held off Wonderful Era for the place stakes.