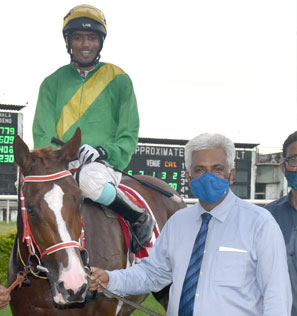 Rather befittingly, versatile filly Silver Bracelet bagged the sprint for the Sana Cup - named after the treble classic winner who was comfortable over all distances. On Saturday, it was the Vijay Singh stable which once again dominated the proceedings. Vijay led in Ielani, Inca, Silver Bracelet and Dazzling. While Ielani and Silver Bracelet sported the green and gold colours of Subir Dasgupta, the other two winners carried the well known pink cross of the Ram Shroff yard. Barring Inca which was piloted by apprentice Sujit Paswan, the other three winners had Hindu Singh in the saddle.

With this result, Vijay has proved in no uncertain manner that the racing fitness of horses from his yard is far superior to those of his peers. To neglect his runners without a very good reason may spell doom for punters – this is especially so in the first half of the season- when horses from other yards have not had an outing. Vijay would have added one more to his tally had public choice Oasis not gone down by the narrowest of margins to Kimaya who had the benefit of a run on the opening day.

Sired by Win Legend out of Silver Profile, chestnut filly Silver Bracelet was gradually improved from the outside draw by Hindu Singh to take over the running at the 600m marker from front runners Amorous White and Shimmering Star who incidentally closed as the 5/2 favourite. Thereafter Silver Bracelet showed a clean pair of heels to her rivals.

Jinsoku closed as the favourite in 1400m race for The Smart Ruler Handicap, but Rutherford’s colt had no answer to the Win Legend – One Vision filly Ielani as she smoothly took over the running at the top of the straight to leave the field standing. The three-year-old ultimately spared two lengths to Criteria but won easing up.

The Golden Prince Handicap run over seven furlongs saw Roma Victor set a cracking pace, followed by Malwa and Inca. The favourite Cliffhanger, also from Vijay Singh’s yard, was never in it. As the front-runner shortened his strides in the final furlong, both Malwa and Inca moved up well on the outside but there was little doubt that Inca (Air Support – Systematic) was moving the better of the two.

With Trevor in the saddle, Euphrates was the rage of the ring in the day’s final event – the Mandolin Handicap for maiden three-year-olds. However, the piping hot favourite from C. Alford’s yard failed to collar the front-runner Silken Stride. Though Dazzling (Speaking of Which – Silver Star) lost some ground at the start, she moved with raking strides in the final furlong to land the spoils.

Trevor however completed a brace for owner Kunal Gupta. The first of these was Vikash Jaiswal-trained Yuvi (Excellent Art-Scholastic Giant) who picked up the Fly High Handicap without too much trouble from Stagger. Subsequently, Eastwood (Phoenix Tower-Doe Ray Me) showed a marvellous turn of foot in the straight to win the seven-furlong race for the Arezzo Handicap by six long lengths from Ember Glow.

A final word of praise for jockey Shezad Khan who displayed great grit and determination atop Manvendra Singh-trained Kimaya (Sedgefield-Saporelli) to get the better of hot favourite Oasis at the wire in the race for the Idaho Handicap.