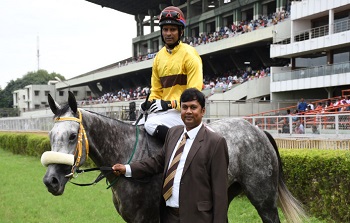 Superstar mare Juliette (Musketier – Gimmesumsugar) yet again showed class and mettle to strike with force while winning a gripping battle involving Parisian, the latter going down narrowly in the lively fight to the finish.

Jockey Sandesh laid low for most part of the 2400m race, lying last until into the straight. No-hoper Bisate made the early pace and was well in front through the backstretch, with Alluring Silver, Parisian and Juliette following in single file.

The same order prevailed until they turned for home. Bisate was perky, not giving in easily even as Alluring Silver challenged her soon on entering the straight. However, Alluring Silver got past and moved slightly inward forcing Bisate to give up momentarily. Meanwhile Parisian and Juliette raced ahead together and with a furlong to go, the three were abreast, with Bisate beaten, but close behind.

Parisian got the measure of Alluring Silver as she put her neck in front inside the final furlong. Jockey Neeraj Rawal got busy atop Parisian and held a slender lead. Sandesh was at his fighting best as Juliette inched closer with every stride. Those were the moments of slight anxiety as Parisian was up for the fight too, but Juliette in the end, forced her way ahead to down Parisian by a neck. Juliette though, never looked in danger as much as the narrow margin may suggest. She finished strongly and Sandesh timed her run perfectly.

Juliette proved that she is a class act and kudos to her trainer Karthik Ganapathy, who has kept her in the condition she is in for a long while now. Juliette last raced to win the Indian St Leger (Gr1) in March this year and showed no signs of any rusting between the longish gap. She was alert right through and showed her blazing turn of foot at just the right time to garner accolades from all quarters.

Ashwa Bravo (Leitir Mor – Shadow Roll) produced another splendid effort to win the Krishnaswamy Memorial Cup in a pleasing manner. Jockey PS Chouhan rode to perfection, keeping Ashwa Bravo along the rails right through and then when it was time, slipped through the gap to bounce ahead in the final furlong to win by two-and-half lengths, without being extended. NRI Valley improved to finish second. Ashwa Bahubali covered a lot of ground in the straight and did well to finish in money ahead of Long Range.

In-form jockey Akshay Kumar was the lone pro to pick up a double. He piloted L D’Silva trained Zamazenta (Planetaire – Calamity) to his maiden victory on his fifth start. Sitting in fourth until the turn, Zamazenta made steady progress to pounce on early leader Ashwa Migsun early in the straight. Once in the lead, Zamazenta accelerated fluently to stay well ahead all the way through. He won by close to six lengths and on a tight rein at that. Ashwa Misgun did not let anyone get past to finish a clear second. Special Effort and Dream Jewel improved in the straight to take the minor slots.

Akshay soon guided another maiden in November Rain (Kingda Ka – Soak) to victory, but had to really egg the Laxman Singh trainee on as November Rain took a while before being alert to the task.

As they turned for home, Quality Wire and Winning Streak were in front with November Rain labouring to catch up. Akshay had to goad the gelding to quicken. Mireya was the widest at the turn and went further wide racing closer to the outer fence. November Rain finally began to respond and when he did, he stormed ahead to pile up a lead of three lengths at the wire to open his account on his fifth essay. Winning Streak ended chasing the winner, while Mireya did well to finish in the money despite going wide all the way.

Different (Green Coast – La Reine) dropped a bombshell beating on-money favourite Mandela Bay with ease. The Hassan trained gelding, who has not been too consistent, was up in front chasing leader Hurricane right from the start. Mandela Bay was in fourth and not too far behind as they turned for home. Different, ridden by Ismail, shot into the lead approaching the distance post and then accelerated further away leaving nothing to chance. Mandela Bay tried hard to catch up, but just could not cover the deficit to end a tame second as Different won by two lengths to spare. Aerial Combat warmed up late and did well to beat Blissful for the third spot.

Ravindra Singh trained New look (Sedgefield – Ballade Danon) clinched a thriller in what looked an open race and panned out to be so. Good connection led them all the way into the straight and was shaping well too. Southern Princess and House of Diamonds were close behind and were warming up too. Good Connections kicked on to stay ahead and had a handy lead inside the final furlong. However, New Life and Crazy Horse arrived with a blazing finish and although Good Connection gave it her all, she could not survive the photo finish that saw New Look managing to pip her on the post. Crazy Horse ended a neck behind the two, with Southern Princess completing the frame another half-length away.

Kingston (Corporate Jungle – Frizbee), from the stables of trainer Satheesh, pulled off a start to finish victory in the hands of jockey Nakhat Singh. Kingston was up and ready at the start and held sway as they turned into the homestretch. Kingston galloped resolutely all through and those near him didn’t seem too threatening.

Lacrosse moved between horses but had to go along the rails to take the gap for a free run. Kingston had a cushion of a couple of lengths when Lacrosse got the opening she wanted. Lacrosse arrived with a late charge and gained briskly on Kingston, however, she didn’t have enough ground to convert her blazing finish to a winning cause. Kingston was up to the task and held her off to win by less than a length. Lorena finished in the money.

Jockey Akshay Kumar was the lone pro to score a double.