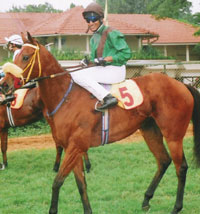 Refreshing produced a brilliant stretch run to edge past Glorious Breaker close home and lift the Gr.2 Bangalore 1000 Guineas,the first classic of the season. The victory provided a great start to new trainer Faraz Arshad as Refreshing also turned out to be the first winner of his career. Glorious Breaker shaped to win the race as she inched past the favourite Caprese in the final furlong but Refreshing burst on the scene from way behind in the hands of Srinath and changed the complexion of the race completely. Caprese, who was the highest rated horse in the fray, was the firm favourite to win though the daughter of Burden of Proof had always let down over a mile. Considering the manner in which she beat Holding Court over seven furlongs, Caprese was considered mature enough to get the extra furlong as she had the breeding to support the belief. But in the event, her defeat conclusively proved that her forte is speed and that she would live up to her rating only while essaying shorter trips. Glorious Breaker who had surprised as a rank outsider in the Fillies Trial Stakes during the Summer season, had everything going for her but the speed at which Refreshing finished settled the issue. Gallagher took Caprese on a start to finish mission, with Glorious Breaker in fourth position while Srinath on Refreshing waited with at the rear of the field. Caprese brought the field into view and didn’t quicken in the manner expected of her though she fought on doggedly but it was evident that she would not last out as Glorious Breaker was essaying a strong challenge on her outside. Glorious Breaker had the measure of the front runner in the final furlong but Refreshing who flew home on the wide outside, floored them all. The daughter of Be Fresh, Refreshing has had a chequered career, one good performance matched by a mediocre one. Ganapathy’s duo of Scintilating Skill and Go For Gold made no show and nothing seems to be going right for the stable at the moment. The shortening odds on Irfan Ghatala trained Tintorino had its own tale to tell. Once pulled up for not doing justice on Tintorino, the Pennine Ridge progeny was waited with for what appeared to be an eternity. From an ante-post quote of 4/1, Tintorino was wagered heavily to close to 12/10 which was surprising because the horse belonged to what is supposedly a non gambling stable. Money makes the mare go and Tintorino ran true to the expectations brought about by the enthusiasm in the market, winning without coming under pressure. Jockey Silva did not use the whip as per the undertaking given in the past that the gelding does not like the whip and the favourite checked in by a widening margin of four lengths without having to be urged vigorously. Olympic Glory ran to finish second. Way to Wealth was another who was backed spiritedly to the exclusion of others. The favourite managed to survive a scare as jockey Prakash was not inclined to go all out on Stride To Glory who came menacingly close. Freebee, who once had the beating of Refreshing, is loitering in this class along with the likes of Simply Amazing and can oblige when there is a desire to do justice to the abilities of the respective mounts. Trainer Ponnappa had a good double through Kodava Fire and Solar Fire who both won comprehensively. Kodava Fire showed amazing speed in the 1100 metres Beginners Plate as she bolted away to win the race for first season runners, in tremendous fashion. Splendid Glory ran on to take the runner up spot ahead of favourite Montesoro who ran a dismal race. Solar Fire’s win came at the expense of the heavily supported Star of Lords who was flat footed once the former essayed his challenge after straightening for the run in for home. Among the beaten brigade in the ranks of the heavily supported horses was Apollo Crown who made no show. King of Queens was another who came in for spirited betting during race time but it was Faction Leader who beat them all as he edged past the front-running King of Queens and then survived an objection for bumping and crossing. Though time and again the tactic of using inferior jockeys to get a good price at the market has boomeranged, the professionals don’t resist the temptation and the use of Vijayan on King of Queens thus ended up in failure. Go Go Boy won at fancy odds at the expense of stablemate Jazz Dancer to bring off the biggest upset of the day. Royal Panache bit the dust at cramped odds as Code of Law won as he pleased. Iberian lasted out to win as the half-hearted effort on the part of jockey Prakash on Glorious Spirit did not test the favourite unduly. Diomedes ran poorly but the poorest run of the day came from Mani At Eighty after an impressive show at Mysore. The fancied runner finished way down the field.