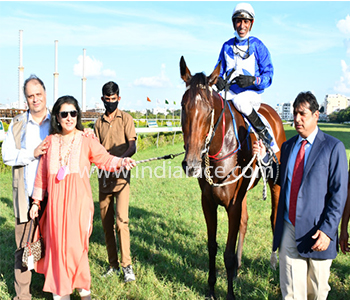 Hyderabad Race Club came alive and was at its festive best. After all, it was celebrating the Club’s Golden Jubilee and Chairmen of several Clubs across the country made up a high-profile delegation of the racing fraternity attending the Golden Jubilee Deccan Derby. HRC Chairman Mr Surendra Reddy played ideal host, felicitating the invitees personally with the traditional presentation of the well-crafted silk shawls to his guests and honouring them.

“This is a landmark occasion and I am thankful for the participation of the special invitees for taking time and travelling to Hyderabad in these troubled times,” he said referring to the stringent Covid protocol. The country’s longest serving Chairman; Mr Reddy has been at the helm for around three decades and has led the HRC to be one of the most prosperous racecourses in India. His latest feather in the cap is the successful online betting approval from the authorities. “I am grateful to the Chief Minister of Telangana,” said Mr Reddy, for his understanding the plight of the racing industry and doing the best he can in cooperating with the Club in aiding the Club in these troubled times. The Golden Jubilee show was well organised and a cheering crowd of over 5000 filling the stands was pleasing to watch after a long while.

Miracle (Multidimensional – Khalifa, Usha Stud) lived up to the high expectations and displayed her class in no uncertain terms while smashing the opposition and crowning herself the young equine empress of the turf! Her victory was fluent, the margin – massive, her maturity – mind boggling and her future – as bright as can be! Pesi Shroff can take a bow. He nurtured the filly aptly right from the start. She won on debut at Pune over seven furlongs and then won everything that was thrown at her including Poonawalla Breeders’ Multi-Million (Gr1), the topmost race for juveniles in the country. She has now won all her five races, four of which are graded races. She won the Deccan Fillies’ soon on setting her hooves on the Hyderabad track and capped it with another dazzling win in the Golden Jubilee Deccan Derby (Gr1).

IN the race too, Miracle settled beautifully under jockey PS Chouhan and was off the pace for the first quarter of the ten furlong race. It didn’t matter who was leading as all eyes were stuck on Miracle. When Chouhan made a forward move past the half-way mark, there would have been a gasp in the stands. Was he taking off too early? They were all traversing over the extended trip for the first time and many had questions about Miracle’s dam having the requisite DNA to provide the staying prowess! Chouhan went for it and by the time they started to wheel round the corner, Miracle was on the tail of Johannesburg and Zuccarelli, ready for the final leg of the race.

Miracle unleashed a powerful stretch run and within strides bounced well-ahead of her rivals. She scorched the turf showing instant acceleration; Chouhan did give her a couple of cracks and Miracle looked like a star in motion as she came off all alone in front to win by over five lengths! Miracle did not just win; she also clipped the course record too, clocking a nippy 2:03:68 as against Tintinnabulation's record of 2:03:89 set in 2014.

The connections proudly led-in the star filly under the loud cheers from the stands and the clicks of shutterbugs. At the presentation, trainer Pesi Shroff was as pokerfaced as only he can be after such heady successes, but for a pro who has seen it all, it is understandable. “I knew that she had some special attributes right from the beginning. Call it instincts, sometimes you are right and sometimes not. I am glad that she won in the manner she did and hopefully she will get better with time,” said Pesi, talking to the race commentator Mr Shivprasad.

Chouhan was gleeful while receiving his trophy. “Miracle won exceptionally well. I was a bit concerned with the early pace and I decided to make headway not wanting to give a lot of leeway to the front-runners,” said Chouhan. He had saved the filly for a good part in the early half of the race, and he made the forward move so as to be in the striking position, as like the rest, she was going over the mile and quarter for the first time. Knowing how well the filly was travelling, Chouhan knew what he was doing. “Once in the straight, Miracle was quick to accelerate and I was confident that she would win with a margin. She is a classy filly and I am confident she will improve further,” said Chouhan.

Ms Ameeta Mehra said “I am very happy. Her fully full brother did not win beyond the sprinting distances. It is the ‘miracle’ of Pesi Shroff who has got her to win over 2000 meters, broken the track record in scintillating style.” When Shivprasad asked her about the question marks on the Dam Khalifa’s staying influence, Ameeta replied, “She is an expensive broodmare; I personally thought as a multi-grade winner, she would provide the staying influence, Miracle proved me right!”

Ashwa Bravo (Leitir Mor – Shadow Roll) was made to earn his victory by Smashing Blue and Victory Parade too posing a threat by sticking along. Corfe Castle was giving too much weight and going wide in the homestretch did not help his cause.

Smashing Blue led them into the straight, with Victory Parade close behind. Ashwa Bravo was waiting for a gap to poke through and that gap didn’t come by too soon. Corfe Castle raced on the centre of the track, but the load he was carrying proved a tad too much. Smashing Blue fought all the way, but in the final 100 meters, Ashwa Bravo, ridden by Ashhad Asbar, broke free with a good final burst to surge ahead and carve out a narrow victory from Smashing Blue and Victory Parade finishing on his haunches.

Bisate (Western Aristocrat – Verbier) was the hot favourite after her consistent showing against top contenders in the recent past. She had no trouble sailing away to victory for her first win in this higher class, taking her tally to four wins from eight starts. The Laxman Singh trainee chased the front running Balius until turning off the backstretch and then cruised ahead with ease to shut the competition out, a long way from home. NRI Valley tried hard to catch up but Bisate had a lot in the tank to keep NRI Valley safely away. Jockey Chouhan had the proverbial ‘armchair’ ride to victory, although the verdict shows just one length plus.

Prasad Raju trained Scramjet (Air Support – Scarlette) made a dramatic dash in the final few strides to pip Watch My Stride on the post for a thrilling win. Watch My Stride got past Mark My word early in the straight and held a slender lead. Mark My Day was right up with the new leader, Southern Princess too was making her presence felt, while Scramjet, who was last to turn for home was picking up speed, making his bid from the wide outside. It looked a hard task for favourite Scramjet, but jockey Trevor, in a never-say-die effort, inched closer to the bunch in front and nailed it on the last stride to win by a ‘nose’ at the wire. Watch My Stride should consider himself unfortunate to have gone down on the last stride. Mark My Day put in a determined effort to finish in the money.

Prasad Raju trained Cosmic Run (Strong Suit – Brushia), ridden by Kiran Naidu, added to her debut win taking her win tally to two from three starts. It was a well-fought race and full of suspense until the last 100 meters. Different tried to tackle early leader Xfinity soon on turning for home, but didn’t find enough speed to get past. While these two were disputing the lead, Cosmic Run was closing-in along the rails having City of Bliss on her outside. House of Diamonds started to respond to his jockey’s call and inched closer. The front running pair was challenged by House of Diamonds and Cosmic run switching lanes and making quick headway. IN the final dash for the finish, Cosmic Run showed good speed to ward off House of Diamonds to win by a narrow margin. NRI Elegance improved considerably to finish an eye-catching third.

D Netto’s Trump Star (Mull of Kintyre – Oceanic Wisdom) scored an impressive win without encountering any threat. He swooped upon new leader Amyra after the latter had taken charge from Gusty Note in the straight. Jockey Deepak Singh rode out hard to join Amyra and the pair fought a couple of strides before Trump Star shot away from Amyra. It was a landmark victory for jockey Deepak Singh as he scored a ‘century’ in the saddle with Trump Star. Amyra warded off Nearest to take the runner-up slot.

Painted Apache (Ampere – Pure Elation) was powerful in the homestretch and ridden tactically by jockey Trevor to score an emphatic victory. At the turn, it was Bedazzled and Ashwa Migsun who were in the front. While Bedazzled prolonged her lead, Ashwa Migsun fell back. Zamazenta and Painted Apache were together when they turned for home and Trevor cleverly kept Zamazenta between himself and Bedazzled before quickening and pushing ahead. Zamazenta was uncomfortable momentarily and although she wriggled out in time, she had a task ahead to catch up with the winner. Painted Apache strode out well to steer clear of the rest, winning by a length and half. Super Angel finished on fast to snatch the runner up berth from Zamazenta.

Soloist (Top Class – Allee Bleue) from Sequeira’s yard scored an encore and the only challenge he faced was from his owner-mate Win Vision from another yard, which he quelled effectively. Soloist followed General Atlantic into the straight and jockey Akshay Kumar got into the act soon to take charge. Win Vision ran a bit erratic in the straight, racing on the wider outside. Soloist kept the momentum going with Askhay riding out the three-year-old filly relentlessly to eventually score her second victory on the trot. Win Vision is for the notebooks as he did run the winner close despite failing to keep a straight course. General Atlantic held on from Moonlight Ruby to finish in the money.

Netto sent out another win in the concluding race of the day, saddling Beauty on Parade (Green Coast – Parade Queen) who won handsomely. Taking off at a good clip Beauty on Parade had a handy lead as they turned into the straight. Jockey Vikrant eased the filly into a nice rhythm and Beauty on Parade accelerated fluently to stay in front all the way. The rider of Blissful was having trouble keeping Blissful from leaning in and by the time he could do so, Beauty on Parade had skipped away to win by two lengths. Blissful ended second, a length ahead of the fast finishing Four One Four.