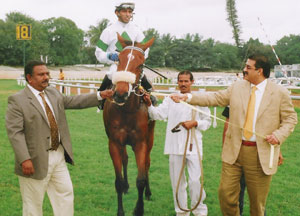 Padmanabhan trained Powerthrust is on course to make a mark in the classics as he won the 1400 metres Madras Race Club Cup, a race for horses rated 40 and above, which featured Friday’s races quite competently. Bred to stay, Powerthrust is expected to make his mark over trips which test the stamina and though nothing great can be expected of him in the Guineas, he will find his mark over the Derby trip. Powerthrust won thrice in the summer and then ran third in the Kingfisher Derby. Subsequently, he had a minor setback which put him out of action for some time. Now running in the highest class and far from fully fit, he nevertheless stretched out well to record a comfortable win over a trip reckoned to be sharp. Al Qamar led the field with Powerthrust settled in a handy second position ahead of the rest. Jockey P.S. Chouhan had Powerthrust take charge at the final turn and the son of Placerville bounced away to establish what turned out to be a winning lead. Though Powerthrust was slowing down at the finish, the lead was good enough. Nordic star ran on to finish second ahead of Just Brave. Amazing Striker put in a poor performance, finishing fifth. Corsican Gal finally came good as she picked up the Taj Stud Plate (Div.I) quite capably from Supreme Power. The daughter of Tejano, Crosical Gal has been somewhat of a disappointment, often not translating the promise of a good show. However, the soft underfoot conditions helped her run to potential as she won readily. Stilton ran on to finish third while Demanding who bolted to the front and had a big lead over the rest before grinding to a halt, can surprise one day with similar tactics. Diamond Caves brought off a big upset in the lower division of the race by staying on resolutely in the front. The fancied trio of Ladyfeelgood, Arizza and Alannah were not spotted at the busy end as Dr Evil and Emilio fought for minor berths, the exacta pool paying a whopping amount of close to Rs.2 lakhs. Zooming was the overwhelming favourite to win the P.Anthony Memorial Plate (Div.I) but the three-year old gelding was never in the hunt. Rank outsider Amazing Forest pulled off a big upset, staving off the challenge of My Winning Charm. Fearless Prince profited from the good forward run the previous week by wining the lower division without much fuss from Global Gal who put in an eye-catching performance. Exclaim who was fancied to run well, was always a lost cause. The lack of a run benefit went against Arjun Mangalorkar’s Epic as favourite Badge of Honour pulled through. The Darashah trainee came under intense pressure from Epic but the favourite had more reserves which played a crucial role in the outcome of the race. Son of former jockey M. Shafiq, Sajid has had a great start to his career in Bangalore, saddling the quietly fancied Vogue to an impressive win in the Beloved Prince Plate. Sajid had another win for the week as Code of Law won on the following day to give him a good boost. Reach Out continued to disappoint. In the day’s other action, Forespe finally obliged, winning as a well fancied runner from Rare Talent. Jockey Alford who rode the winner, had a treble for the day as he followed the success with wins on Fearless Princess and Amazing Forest.