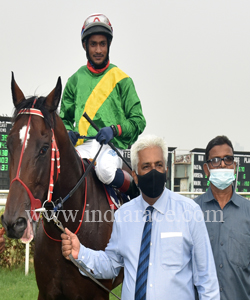 A cloudy afternoon at RCTC on Saturday proved to be extremely fruitful for jockey Akshay Kumar who notched up a superb treble. Of his three victories, it was trainer Vijay Singh’s Jake who stunned spectators with his amazing return to form. Available at 5/1, the son of Win Legend out of Aerona was ridden in check on this occasion, instead of his usual front-running style. The big made bay lapped up the seven-furlong trip for The Baqlava Handicap when Akshay released the brakes after the turning for home. He was galloping freely in front thereafter, leaving the field cold, eventually winning by over nine long lengths from the favourite Mountain Lion. This performance makes him a frontline contender for the 2000 Guineas to be run early next month.

The afternoon commenced with Akshay riding Arti Doctor’s Third Avenue (Ampere-Avant Garde) to a start-to-finish triumph in the Satellite Handicap. Deemed To Fire was a good second and will be worth keeping an eye on. Akshay’s next win came astride Vijay Singh-trained Dandi Satyagraha (Chevalier-Salt) who was cleverly piloted by the rider as he took the shortest route home after lying a handy fourth till the top of the straight, to land the Totalisator Handicap.

One race earlier, in the Star Contender Handicap, Aashay Doctor’s Ember Glow (Strong Suit-Attune) pulled off a stunning upset with apprentice Tejeshwar in the saddle. A massive gamble on Who Dares Wins came unstuck when the filly was slow to jump out of the gates and lost about five lengths. The other fancied runner Nishk seemed to be outpaced by Indian Tiger from the outset. The pair were however hampered in the straight by the riderless Wandering Angel. Both Nishk and Who Dares Wins are ones for the notebook.

In the second race of the day, The Coxcomb Handicap, trainer Christopher Alford’s Legend Returns was the rage of the ring but it was stablemate Adorinda who put her best foot forward. The filly by Speaking of Which out of Adiella was given a regulation ride by Shezad Khan who kept her third behind the favourite and Jinsoku before taking over the running in the straight to win as she liked. Legend Returns was a disappointment.

A bold gamble on trainer Faisal Abbas’s The Protector (Excellent Art-Mauna Kea) came good with jockey Amyn Merchant astride. Taking no chances, the veteran rider maintained the bay gelding in second slot behind Sir Mor. He took over the running in the straight and staved off a fairly strong challenge from Ieilani.

The curtain came down with Daring Heart(Multidimensional-Romantique)  and jockey Hindu Singh causing a major upset. The filly had recently been transferred to the Bharath Singh yard from brother Vijay’s and it proved lucky for the connections as she won close home from Infinite N Beyond who was threatening to bag the prize at the distance post. Incidentally, it was jockey Hindu Singh’s last ride before his six-day suspension period.

Earlier in the day, the sad demise of RK Chaturvedi had left a pall of gloom hanging over the racecourse. He had been the Clerk-of-the-course and starter for several decades and though retired some time ago, his passing away has left a sorrowful void for oldtimers.