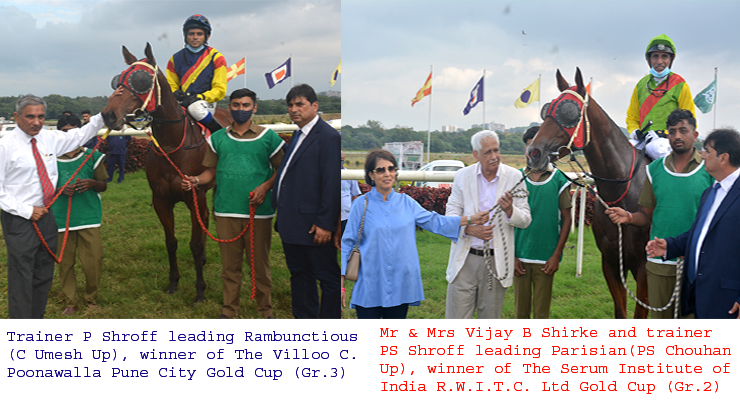 Pesi Shroff returned the star of the day sending out five winners in the eight-race card which included the two graded races that were the feature of the day. Sharing the spoils with the ace trainer was jockey PS Chouhan who piloted four of them. The Shroff-Chouhan pair ran amok in the first half of the day, dishing out four winners in a row.

The most impressive winner of the day was Parisian (Champs Elysees –Anywaysmile, Usha Stud) as she walloped the ordinary opposition with absolute ease to clinch the Serum Institute of India RWITC Ltd Gold Cup (Gr2). Quickest out, Chouhan held back Parisian as Caprisca led the field, about two lengths ahead of Apsara Star; Parisian settled nearly ten lengths further behind, while Truly Epic never really made any impact in the entire race.

Parisian made steady progress to be close to the front runners at the turn and then took off in style to sail away on tight reins. Parisian galloped fluently and was a delight to watch her winning in the manner she did, galloping with nice and easy strides. She won by close to seven lengths from Caprisca, who in turn finished well ahead of Apsara Star.

Rambunctious (Kingda Ka – Circle of Bliss, Nanoli Stud) gave off her best and did extremely well to beat Born Queen by two lengths, booting home the weight advantage of eight kilos that she received from Born Queen. Favourite Alluring Silver was surprisingly missing in the action and looked out of sorts, eventually finishing in the rut.

Born Queen led briefly on start, but soon let Flying Visit take over. Those behind these two were huddled closely with Sultan Suleiman, Rambunctious, Victorious Sermon racing abreast, while Alluring Silver and Augustus Caesar were on their tail with Grand Accord a close last.

Born Queen wrested back the initiative at the turn and led the pack into the straight. Rambunctious moved along the rails to be second, while Augustus Caesar, Sultan Suleiman and Victorious Sermon were on the wider out, with Alluring Silver right with them. Born Queen shaped well in the first half of the straight and just when it looked like she was in control, Rambunctious warmed up and finished with a scintillating burst. Once she picked up speed, Rambunctious looked home and dry and she wiped off the couple of lengths’ lead in a trice and sped away to win by two lengths. Born Queen looked good until Rambunctious spoiled her party, but hung on to the runner up berth. Grand Accord did well to make steady headway along the rails to finish in the money beating some reputed younger rivals.

Pesi’s first success that led to the roll of four was with Zuccarelli (Western Aristocrat – Circle of Bliss, Nanoli Stud) and the set of maidens he was taking on, seemed a cake walk for him, given his classic experience at Hyderabad. He obviously was the money-back favourite and he fully justified the honour.

Botero had a sizable lead approaching the final turn with Zuccarelli moving up nicely to set up well for the final run. The others were not up to it and lagged far behind. Zuccarelli was all over Botero once they turned for home and accelerated sweetly to take charge early in the straight. He dominated the homestretch and stretched out fluently achieving his maiden success in a pleasing fashion. He tore away from Botero to win by a big margin of over five lengths. Stablemate Botero came out second best; he too sparing eleven lengths to Animous at the winning post.  Zuccarelli is a good talent and he should pick up a few races more in the near future. Botero too should improve after this run.

Immeasurable (Multidimensional – Pricewise, Usha Stud) made ample amends and scored his maiden win on his third career start. Chouhan led the field soon on start and had Bold Advance and Winter Storm close behind. These three took the top positions as even Marlboro Man could only finish fourth.

Immeasurable had a slender lead coming into the straight. Bold Advance and Winter Storm were going all out in chase. Chouhan had to work hard this time to maintain a safe distance from the dual threat lurking close behind. However, he kept the momentum going to eventually stay clear, confining the fight between the two behind as Immeasurable kicked on to win by just under two lengths. Winter Storm managed to pip Bold Advance for the runner-up berth.

Kinnara (Kingman – Mujadil Draw, Nanoli Stud) provided the hattrick from the trainer-jockey combo, the filly showing a clean pair of heels in the homestretch and winning by a massive margin of over eight lengths. She won as she liked, hitting the front soon on settling down and then galloping at a good pace right through to the end. Camden Town, Perfect Man and Jughead were the closest to the leader and they stayed ahead of the rest all the way, without troubling Kinnara. The Shroff trainee got stronger in the straight and devoured ground briskly to gallop out of reach while lining up her maiden win on her second start. Kinnara too appears to be a special talent and can score an encore. Perfect Man was the best of the beaten lot and is bound to improve after this run.

Imtiaz Sait’s Multistarrer (Multidimensional – Glorious Colours, Usha Stud) stopped the four-race winning streak of Shroff with a late but decisive charge in the final furlong. Red Carnation led them into the straight with Winter close in second. Northern Lights moved out on the wider outside, but drifted too wide. Multistarrer picked up speed approaching the distance post and jockey Sandesh got aggressive on his mount and stormed into the lead in the final furlong. Northern Lights who had moved out, again started to move inwards failing to keep a straight course not helping her cause whatsoever. Multistarrer kicked on resolutely to end up winning by two lengths from Northern Lights. Red Carnation did well to finish a close third, while Evangelist improved a slot or two to complete the frame.

Karthik trained four year old filly Kamaria (David Livingstone – Ridawana, Hazara Stud) showed good improvement over her last run place effort over a mile to post her maiden victory on her sixth start. She raced in second behind runaway leader Charming Star until past the 800m mark and then made a smooth forward move to lead them into the straight. Jockey Bhawani Singh got into the act soon on turning for home and darted further ahead to work up a handy lead. Walk The Talk tried hard to catch up but Kamaria was just too good and he had to be content with the runner-up berth. Chieftain ran on to finish in the money.

Bezan Chenoy trained Grand Architect (Dean’s Kitten – Sacred Law, Sohna Stud) made a valiant dash to pip Sandra’s Secret on the post to add to his solitary victory that came in January last year. Sandra's Secret looked in command just a furlong earlier, but Grand Architect, with Kavraj in the saddle providing able assistance, stormed in with a good burst that did Sandra’s Secret in close home. Power of Neath and Istanbul finished closely for the minor slots.

For the professionals, trainer Pesi Shroff and jockey PS Chouhan were the stars of the day with five and four wins respectively.