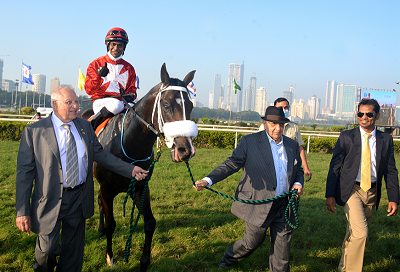 The top two contenders for the Arion horse Company Indian 2000 Guineas (Gr1) provided an exciting tussle that went to the wire. Stockbridge, the other fancied runner did not live up to the expectations, perhaps due to his busy schedule and hectic travel grind. A Star Is Born managed to avenge his earlier defeats to both his rivals, Zuccarelli in the Pune Derby and Stockbridge on his debut at Bangalore. The impressive win that Zuccarelli achieved beating A Star Is Born in the Pune Derby made him the public rage being offered at 10 to 8 on at race time, A Star Is Born was quoted at 5 to 2 while Stockbridge was next in demand at about 3 to 1.

Both Zuccarelli and A Star is Born were off the pace, racing together at the rear end of the field with only the slowly off Pure behind them. Souza expectedly set the pace with Darwin in second, the rest were a few lengths behind for the first half of the mile-long journey. Zuccarelli made the first move forward approaching the 600m mark and started to make headway, cutting down the sizable lead that Souza and Darwin had until the turn, to be in a good position, Chouhan ensuring he kept Zuccarelli clear of the traffic, making his run on the outside. A Star Is Born (Roderic O’connor – Angel Dust, Kunigal Stud) waited slightly longer and was a little over two lengths behind Zuccarelli as they straightened for home.

Zuccarelli picked up speed past the 400m and in quick time surged ahead to go into the lead with about 300m to go. Presidential too came up well, but was sandwiched between Zuccarelli and Darwin, receiving a bad check at a crucial juncture. That he broke his stride and yet managed to rally to take the third spot was a brave effort. Suraj Narredu meanwhile, started to ride out A Star Is Born and began to chase down Zuccarelli. He was a tad erratic as he failed to keep a straight course, yet he devoured ground briskly to nail Zuccarelli a stride from the winning post to score a thrilling victory, clinching the Arion Horse Company Indian 2000 Guineas (Gr1) by a neck.

“Winning an Indian Classic is always a delight. It was a hot race too with a bit of jostling at the start. It was situational more than strategy to race alongside Zuccarelli from early on. I would have preferred to have been on the outside as there was also the risk of clipping in the tight field ahead. Zuccarelli had the early run but I kept within my mount range all the time. It all boiled on to the final furlong when A Star is Born began to warm up nicely. He did shift out as he shied away with the whip, so after a couple of cracks and when he picked up, I decided to urge him on and he responded extremely well. I was confident I would get past Zuccarelli in the final furlong as I was covering the gap briskly. I felt I beat Zuccarelli about fifty meters from the winning post although it looked a much closer affair on the screens,” said jockey ace Suraj Narredu.

“I was optimistic of his chances,” said trainer Rajesh Narredu. Asked about the huge improvement vis-à-vis the Pune Derby result, Rajesh said, “In my opinion, a lot of factors went against A Star is Born at that time. The halt in racing at Bangalore and also the rains hampered a free run for his preparations at Bangalore. He was coming in with only two runs. The Pune track too can be tricky for a first timer there. Yet I was satisfied with his performance in Pune as Zuccarelli is a top horse and he had a lot more experience. A Star is Born showed a lot of scope for improvement and he made steady progress post the Derby. His final spurts showed that he was close to his best and I am happy he ran to potential.” ON his potential to stay and his next course of action, Rajesh quipped, “It’s back to the drawing board for now, we will give it a couple of days to decide. His obvious target is the Indian Derby. I am confident that he will stay the distance as on his pedigree, he inherits the staying qualities from both sides.”

Giant Star (Excellent Art – Sweeping Star, Poonawalla Stud) had it easy as he cantered to victory in the Class II Nawabzada Rashiduzzafar Khan Trophy. The Malesh Narredu trained colt settled in the rear of the three-horse field as Majistero led them into the straight with Successor in tow. However, once they turned for home, Giant Star, with Neeraj Rawal up, cruised past them on a tight rein and then cantered away to ambling away with every stride to pile up a huge lead to win by a distance from Successor.

Imtiaz Sait trained Endeavour (Strong Suit – Starring, Manjri Stud) scored his third victory, second on the trot to claim the MN Nazir Trophy in a fighting finish. To Endeavour’s credit, he rallied from the second last position and covered a lot of ground to snatch the verdict close home.

Sky Fall and Cellini were in front when they turned for home with Excelerator and Baby Bazooka close behind. Endeavour, with Kirtish Bhagat astride, moved up from the wide outside. Cellini got the measure of Sky Fall past the distance post and dashed towards the winning post. Endeavour arrived with a big gallop in the last 100 meters to spoil the party for Cellini at the post. Spring Grove too finished on fast to finish a close third. For one racing after a long layoff, Sky Fall did commendably well and bears watching the next time out.

Shroff’s Botero (Western Aristocrat – Verbier, Nanoli Stud) scored a clinical start-to-finish victory to achieve his maiden win on his third start. Botero, with Chouhan atop, had no difficulty at any stage as he dictated the terms all the way, keeping well ahead of the rest at any given time. Into the straight, Botero churned out quality speed and showed no signs of tiring out. Sky Storm chased him all the way and was ridden out in the final furlong, but made no impact on Botero who con by over three lengths.

Columbian (Air Support – Celebrity, Kunigal Stud) was another one who dished out a thorough beating to his rivals, winning by more than eight lengths. He moved up to second soon on turning for home as Fuhrer assumed command in the homestretch. Columbian, with Chouhan in the saddle, sailed past Fuhrer traveling fluently although hard held. Chouhan never really had to press on the pedal as Columbian stretched out sweetly to draw away and win handsomely. Fuhrer just managed to stay on to finish second from the fast finishing Juiced.

Gusty Girl (Gusto – Carma, Bishen Stud) caused a flutter while achieving her maiden win on her eighth start. Favourite Windy City looked in charge the whole way until shocked by a sudden burst of speed from the Dallas Todywalla trainee. Windy City, on a start-to-finish mission, looked the winner when he led by about five lengths at the distance post. Gusty Girl was racing along the inner rails in about fourth or fifth. Just when it looked like Windy City had it covered, jockey Vinod switched to the outside and came with telling strides to floor Windy City in the dying moments of the race. How the winner managed to win by a length and half is as surprising as her win itself. It looked improbable for Windy City to go down just moments before Gusty Girl produced a blinder in the last fifty. Turmeric Tower improved positions to finish in the money.

Prime fancy Chancellor (Win Legend – Woodberg, Dashmesh Stud) saddled by Dallas Todywalla, was another one to score a maiden win on his eighth start. Jockey Sandesh Chancellor settled in second behind Twelfth Earl until into the straight and then unleashed a strong gallop to pass the leader with ease and then kick on to score an emphatic victory, sparing close to four lengths at the wire. She is On Fire finished on well to take the runner-up berth ahead of Twelfth Earl.

For the professionals, trainers Pesi Shroff and Dallas Todywalla saddled a double each, while jockey PS Chouhan scored a double.