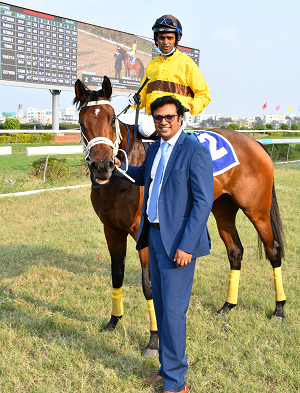 Not among the prime fancies, Faith of Success was ridden off the pace by jockey Neeraj Rawal and saved the best of the filly for the all-important end. Aretha made a steady pace leading the field for most of the 2400m journey. Icicle turned around after the first two furlongs and took no further part in the race.

Aretha and the top two fancies Ruling Goddess and Maximum Glamour took the top three positions through the backstretch, with Faith of Success in fourth, while the other fancied runner Own Voice raced at the tail end of the field.

Ruling Goddess made the first dash early in the straight as Aretha bowed out. Maximum Glamour did not find the depth or speed when it mattered most and could not offer any resistance as Faith of Success cruised past her on her way to grab the lead. Ruling Goddess fought hard, but found Faith of Success simply too good on the day. Faith of Success galloped full of steam and had a lot in her as she accelerated brilliantly to storm ahead in the final furlong and land the spoils comfortably. Although the margin of victory showed just over a length, Faith of Success looked the winner the moment she put her foot on the pedal, about a furlong and half from the winning post. Ruling Goddess did her best to finish a good second, well clear of Maximum Glamour. Winmylove made progress in the straight, emerging from the last position at the turn, to finishing a neck behind Maximum Glamour and that is a positive for the filly.

For young trainer Aravind Ganapathy, Faith of Success provided him with his first Classic success – a landmark for any professional to cherish! “Yes, I am highly pleased and thankful to the powers that be for my first ‘Classic’ trophy. This will take a while to sink in,’ said Aravind with a noticeable rasp of joy in his voice. ”I always knew that she would do well over the longer trips and this was further confirmed when she won her maiden race over nine furlongs recently. She took the travel well obviously and she was fresh for the targeted race. The strategy was plain and simple; to settle her well in any position and open her up as late as possible. Neeraj Rawal rode her to perfection and when I saw him (Neeraj) making headway in the homestretch, I was expecting her to respond quickly and that’s exactly what she did. She proved me right that she is a formidable long-distance runner and I am mighty happy she did so well,” concluded Aravind.

The other long distance race panned out to be a very close affair with Ashwa Raudee, Fire Power and Southern Princess flashing past the post locked together. Ashwa Raudee skipped ahead taking over from the tiring pair of Mark My Word and Francis Bacon soon on entering the straight. Jockey Mukesh Kumar rode his heart out to get the best out of the Laxman Singh ward. There was a serious challenge brewing close behind and Ashwa Raudee had a furlong and half to go for the safety of the winning post. Buckley was right alongside giving a tough fight, Southern Princess was closing in fast and then there was Fire Power literally breathing fire on the further outside. It was a touch and go affair in the final 100 meters with Ashwa Raudee, Southern Princess and Fire Power going all out, hurtling towards the winning post. Mukesh Kumar held his nerve while his mount kept galloping hard to ward off his challengers and scrape out a narrow victory just in time. Fire Power covered considerable ground, but could not edge out the winner, but managed to pip Southern Princess for the runner-up berth.

Sunderji’s Galway Bay (Ampere – Santa Lucia) who had two forward runs coming into this one, showed commendable fighting qualities as she put in a tough and prolonged duel with favorite White Roses to earn her maiden victory the hard way.

White Roses had the early run, storming into the lead soon after the turn. Galway Bay moved up from fourth in pursuit of the favorite. The others fell back alarmingly making it a two-horse contest. White Roses came under pressure when Galway Bay started to make a strong bid approaching the distance post. The pair fought it out right to the end with Galway Bay getting tougher with every stride to knock White Roses out a stride or two from the winning post to secure a half-length Victory. White Roses ended a gallant second in a brilliant fought contest.

Morior Invictus (Tenth Star – Sango River) trained by Faiyaz Khan quickened well midway down the straight, catching up with the front running Aarya and My Master. Ok Boss was moving up along the rails. Morior Invictus moved inwards once he got the lead and galloped across My Master and ran too close to Ok Boss who was tightened for room. However, jockey Ajeeth Kumar managed to control his mount and then skipped ahead to win by a little over one length. An objection followed, expectedly, however, it was clear that the inward drift was not serious enough to take away the race from Morior Invictus and duly overruled. Isra too had to be checked in the process, but rallied well to pip My Master to finish in the money.

Favorite General Atlantic (Smuggler’s Cove – Sine Qua Nan) gave his backers a lot to shout about with a sustained gallop in the final furlong. Paladino had barely taken charge when Gregor Clegane moved swiftly along the rails to make a serious forward charge. General Atlantic started to devour ground briskly and came at the pair at good speed. Paladino fell back much earlier than expected, while Gregor Clegane and General Atlantic were at each other at full clip. General Atlantic finished on a lot better, to carve out a comfortable victory, although the margin showed just half a length. Prime Gardenia improved positions and did well to save the place money.

Dillon (Corporate Jungle – Illaunslea) made smooth progress in the homestretch and was fashionable in his finish as he trounced the opposition in an impressive manner. Char Ek Char led the charge for home soon on straightening up. Dillon stepped up pace to join the leader with Southern Act and Sputnik hard pressed to stay in contention. Salisbury too made his presence felt catching up with the bunch briskly from the outside. They were all closely huddled with a furlong to go, but Dillon pulled away fluently from there on and suddenly the hot fight that was brewing, simply vanished. Dillon tore away from them all to stretch away nicely and score by over two lengths. Char Ek Char managed to stave off Salisbury for the minor slots. Sputnic pushed out favorite Southern Act out of the frame.

Hassan trained Hot Seat (Smuggler’s Cove – Azarenka) put in a strong finishing gallop in the hands of Akshay Kumar, to outpace her rivals to achieve her maiden success that seemed overdue. Ambitious Star led them into the straight with Stark close behind. Narakamicie raced along the rails. Hot Seat warmed up nicely midway down the straight and when she picked up, she was too fast for the rest. She swooped on the front running trio and soon dashed past and away to win by two and a half lengths. Ambitious Star did well to sustain all the way and ward off Narakamicie for the runner-up berth.

For the professionals, trainer Ravindra Singh and jockey Akshay Kumar scored a double each.