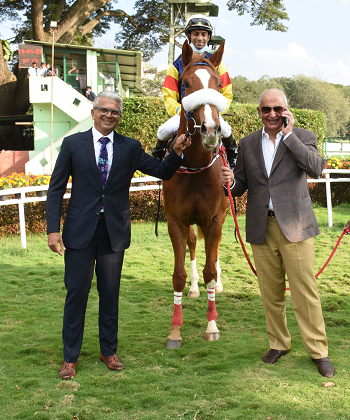 Back after his stint in Qatar, leading pro Trevor Patel produced an exemplary effort on Teresita to drive the Sulaiman Attaollahi schooled filly to victory in the `Ladies Derby', the Bangalore Oaks. Not many old hats nor the pundits fancied the winner despite the fact that Teresita produced a satisfactory performance in her last essay finishing third behind the classy Miracle, a `neck' separating her from Petronia in the Indian 1000 Guineas at Mahalaxmi. The fact that she was seen finishing on well clearly indicated that the Oaks winner from the Nanoli Stud Farm will relish the mile-and-half classic journey, but  the railbirds fancied  the Pesi Shroff schooled Alicia to follow up after her resplendent effort in the South India 1000 Guineas. The fact that Alicia was campaigned to deliver again in five days and that could prove a exacting test did not deter her followers. They simply believed that on sheer class Alicia would stand tall at the podium. The double classic winner did produce her best and at one stage it looked like the Pesi Shroff ward would run home a winner before Trevor packed punch on Teresita and the Sulaiman ward steadily and surely bridged the gap to finally overhaul the public choice and emerge the best of her age and sex. All credit to Sulaiman for sending out Teresita in ship-shape condition. The `Queen' looked a picture of fitness at the parade ring and to the delight of Khusro Dhunjibhoy, Prabhakar Reddy and Rama Seshu Eyunni, Teresita produced her best effort to gallop into the classic circle. Alicia in defeat was not disgraced and lives to fight another day, while Eternal Blaze was outclassed by the top two finishers.

After the twin strikes from Trevor, Srinath in no mood to be over shadowed, recorded back-to-back wins in the final two events on  Prince Abir and Galactical. The former helped Sulaiman record a grand treble including the classic success on the big ladies day and this, it is needless to mention  the leading trainer will cherish most.

Windstorm from Satish Narredu's yard was fancied most in this event run over a distance of nine furlongs while the Prithviraj camp fancied Karanveer sweetly, backed down from (8/1) to (4/1). The topweighted Prince Abir nevertheless had his fair share of supporters and the `Prince' readily justified the confidence of his supporters romping home in emphatic fashion. Karanveer did well to gain the runner-up berth ahead of Armory while Windstorm only managed to complete the frame.

Spurred by the success, Srinath sent Galatical to the front in the 1100M dash in the concluding event and hung on grimly at end to score from Shanaey. The runner-up, who was a medium of a king-sized gamble in his last essay which he failed to pull up thanks to the inept effort of jockey Surya again suffered at the hands of Vishal Bunde who failed to pack punch and drive him hard at the all-important end. That said and done, one cannot take credit away from the winner who completed a fine-hat-trick and trainer Arjun Manglorkar certainly deserves a pat on the back for shrewdly planning and accomplishing the mission on Galactical. A  couple of favourite backers made no secret of their opinion that Arjun bowled a googly in this event, Millbrook, another contestant from his yard which garnered the maximum support, but performed like a dud.in this event. But to be fair to the top trainer, it must be mentioned that he had two good runners and the in-form performer did get it right while it was not Millbrook's day.

The opening event, the lower division of the Snow Bird Plate produced a  shock result which pushed the punters back against the wall before the strongly fancied Recall Of You from Rajesh Narredu's yard helped the punters recoup their early loss. The eight to one shot Aherne came up trumps in the opening event in the hands of Darshan comfortably beating the lesser fancied Capri Girl and Raven Rock in what was a very open affair. Recall Of You on the strength of her impressive victory in her last essay was backed to the exclusion of her nine rivals in the S V Subramaniam Memorial Trophy run over a sprint and the fashionably bred mare cantered home in fine style. Recall Of You is in fine nick and is well poised to do the `trick' when next saddled. Silver Dew from Ganapathy's yard caught the eye while finishing a game second ahead of Harmonia and is one for the note book.

Princess Gloria reigned supreme in the Winged Foot Plate, edging out the public choice Secret Of Life at the shadow of the winning post. The winner from the stables of Arjun had impressed most in the morning trials and in the hands of John produced an impressive effort to gain the day in a thriller. The winner has tremendous scope for improvement and it will pay to follow the `Princess' again when next saddled.