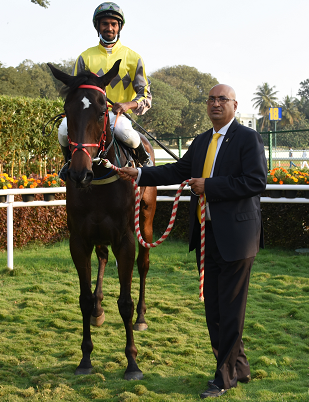 Punters enjoyed a good run under the cool winter season, five firm favourites and two well supported second choices including Antibes galloping home first in the eight-event card. Trainer Arjun Manglorkar, who has so far dominated the season alongwith Sulaiman Attaollahi led in another winner of the plum event, Antibes, who reigned supreme in the Byerley Turf Stakes run over a mile. Garamond from Irfan Ghatala's yard was fancied most, but the top fancy in the hands of Pradeep Chouhan found Antibes too hot to handle and like Shesmyscript on Tuesday had to rest content with the runner-up berth. While Arjun and Sulaiman continue to call the shots this winter, the other three top board players at this premier centre, Padmanabhan, Prasanna Kumar and Neil Darashah have found the going tough and this has helped the Narredus and the Ganapathys pick up more than their share of races including a couple of classics. Ganapathy first led in Eternal Blaze, the winner of the 1000 Guineas before his son Aravind proudly posed with Faith Of Success, his maiden classic success at Malakpet. Rajesh Narredu cracked the whip at Mahalaxmi, A Star Is Born  edging out Zuccarelli in a humdinger in the colts classic and Priceless Gold  is scaling high,unbeaten this winter.

A tad disappointed after she failed to beat Speedster in her last essay over a distance of 2000 metres, a majority of supporters of Antibes chose to go with Garamond in line for a hat-trick. But the shift failed to bring home the desired result, Antibes in the hands of Antony Raj powering home in fine style. Chouhan astride Garamond will like to forget his score in the two days at this centre, finishing runner-up four times including on Alicia in the Oaks.

The principal added attraction, the Black Caviar Stakes for three-year-old youngsters saw the even-money favourite Shabelle from Sulaiman Attaollahi's yard edge out rankoutsider Star Glory from Satish Narredu's yard and the Parvati Byramji schooled Ravishing Form in a pulse-pounding finish. After Suraj Narredu astride Ravishing Form streaked into the lead approaching the distance post, it appeared Ravishing Form will bring the smile back on the face of Parvati after the debacle of Matera, but that was not to be, as Shabelle from the Kunigal Stud farm  produced a sparkling gallop to overhaul the leader and the long shot piloted by Mani  close home. Nevertheless Ravishing Form and Star Glory will benefit most from their first exercise and it will not be long before they join Shabelle in the winners' circle.

Earlier, the Godolphin Barb Stakes run over a mile was at the mercy of the Padmanabhan-trained Setareh, a facile last start winner and the talented filly from the Dashmesh Stud Farm registered her second straight success without really working up sweat in the hands of Irish pro Shane Grey. Shane later booted home the second in demand at the betting Code Of Honour in the concluding event to record his first double. Despite the fact that Chouhan had finished runner-up four times and lady luck continued to desert the leading pro, the punters fancied him to score in the final event, the first division of the Premium Spirit Stakes run over a sprint. The stalwart astride the favourite Chisox from Pradeep Annaiah's yard did try hard but failed again in his effort to stand tall at the podium, finishing a tame third behind the two leaders, Code Of Honour and Impelling Power, who flashed past the post locked together before the `magic eye' nodded in favour of Code Of Honour.

It is true that Neil Darashah has slipped down the ranking in the trainers standing this season, but the gutsy performer who led in a good number of winners at Kolkata deserves a big high-five for the superb performance of Black Coffee this season. The in-form son of Win Legend  after joining his yard registered a fine hat-trick and on the strength of his effort in the upper division of the Dancing Fountain Stakes over a sprint, the Coffee believe me is smelling nice and is hot. The winner was strongly supported on the strength of his two earlier wins and on Wednesday too he donkey-licked  his nine rivals to win by a margin of six lengths. Baltimore expectedly gained the runner-up berth ahead of Embosom while Queen Regnant completed the frame.

You got to doff your hat to trainer Prithviraj. The man failed to pull off a massive gamble on Shanaey thanks to the inept effort of Surya before Vishal Bunde astride Shaney on Tuesday was also unequal to the task. Undeterred Prithviraj decided to go with Surya and take a pot shot in the opener, the third division of the Premium Spirit Stakes. The pot shot on Quick Shots came off, Surya guiding home the winner to the delight of his trainer. The six to one shot beat the fancied Altair from Sharath Kumar's yard comfortably and it will pay to follow the winner in the higher category.

The manned in which he won his last start in the hands of lowly Tousif Khan, Lucky Chance was rightly fancied to score in the lower division of the Dancing Fountain Plate and the Dominic ward established that his last effort was no flash in the pan romping home in style to record his second straight success. General Patton, who still continues to perform worse than a foot soldier finished second ahead of Smithsonian who is likely to earn his cornbill in the weeks ahead.

After a couple of big misses, Lokanath Gowda got it right through Sensational Grey.The winner of the third event was backed to the exclusion of his 11 rivals and in the hands of Darshan, Sensational Grey justified the confidence of the Lokanath camp bolting in ahead of Unyielding from Darius Byramji's yard who was also sweetly fancied but lost out to a better horse partnered by  a much better jockey.