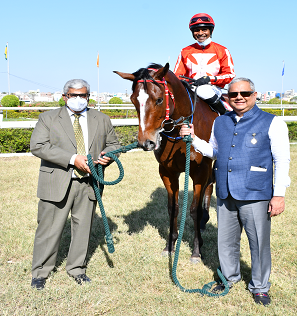 The Alcock Arabian Million was all about debutante Arcana (Roderic O’connor – Mystic Romance) who outclassed and outpaced his four hapless rivals, dominating the race from the start. Arcana showed maturity in settling down soon on start and jockey Suraj Narredu did not have much to do other than guide the Deshmukh trained colt along the way.

Once in the straight, Arcana sailed away impressively leaving no chance for the rest to even think about a challenge. Arcana strode away majestically and showed ample talent and promise in the manner he reduced it to a no-contest! Kaitlan improved a slot to finish second nearly nine lengths behind Arcana.

In Contention (Leitir Mor – Remembrance of You) lined up an impressive hat-trick moving up from Class IV to Class II this season. Jockey Trevor had the Sunderji trained mare going hard-held in the homestretch and let her go in the final furlong. In Contention sailed past Kesariya Balam and pulled away in no time to post an authoritative victory by a good margin of four lengths. Saffron Art just managed to pip Kesariya Balam on the post for the second place. Ashwa Yashobali ran on from the rear to finish in the frame.

L D Silva trained Carlisle (Oiseau De Feu – Chanterelle) got the taste of his first win on his fourth start in the opening race of the day. Crimson Rose hit the front soon on settling down and had favourite Superimpose on her inside and Carlisle close behind as they turned for home.

Crimson Rose had a slender lead with a little over 300m to go when Superimpose and Carlisle came up with a dual challenge. Carlisle moved in a bit sharply due to which Superimpose got sandwiched between Carlisle and Crimson Rose unbalancing the rider in the process. Superimpose had to be checked and that undoubtedly hampered his run. Carlisle gained terrific momentum and just zipped past Crimson Rose to bounce away and win by two lengths. Crimson Rose finished a decent second; Yaletown covered a lot of ground to finish a fair third, while Superimpose was unlucky to have got tangled in the manner he did and this run is best ignored.

Call of the Blue (Chinese Whispers – Nightlife) had to work hard all through the race to add to his win tally which had stayed stagnant at three since October 2019, which is when he had last won. Jockey Gaurav Singh had him out quick and settled close behind leader That’s My Way until into the turn. Gaurav had to ride out the Waseem Ahmed ward even before the bend and a crack or two at the turn kept the gelding going. Call of the Blue got past That’s My Way, but had Astronaut snapping at his tail. He had barely tackled Astronaut, when Fly to the Stars came up with a spirited challenge. This one was a closer duel as Fly To the Stars was getting too close for comfort, however, Call to the Blue galloped relentlessly to ensure he got there without any hiccups and seized his moment to score. Fly To the Stars ended a good second, while Astronaut too finished a fair third.

Magan Singh trained I am Superman (Planetaire – Cienego) scored his memorable first win on his eighth start and he literally flew in the last few strides to make it. Racing in the mid-pack until into the straight, I am Superman made his run from the outside and had Royal Avenger on his haunches, both making their final run at the same juncture.

Out in front, NRI Secret was battling Asturias and Starwalt when jockey Kuldeep Singh got his mount going. I am Superman responded instantly and devoured ground at a fast rate. Royal Avenger stuck by but could not find the extra bit. These two thundered past the fighting bunch in front and I am Superman clinched the race by half a length from Royal Avenger. Starwalt got the third spot ahead of Asturias. Favourite Good Tidings finished one off the fence without troubling the top finishers.

Miss Little Angel set the turf on fire with a fiery gallop that shut her opponents out way early in the homestretch. Furious Fun led them into the straight and soon Narakamecie moved up to challenge the lead. Sally moved along the rails, while Golden Forza was trying hard to stay alive. Miss Little Angel revved up on the outside and arrived with a tremendous burst of speed that left them all stranded. She flashed past the fighting group of horses in a trice to set off for a thumping victory. The Shashikanth trained filly was simply brilliant in the final furlong and jockey Santosh Raj got her to light up just at the right time. She completely floored the rest. Sally finished second by a neck from Narakamecie and Golden Forza.

Satheesh trained Grand Duke (Multidimensional – Scarborough Fair) who had been finishing late and prominently in his recent runs, got the ground he wanted over the extended trip and made the most of it to bring up his maiden victory on his 12th start.

Trainer Deshmukh led-in his second winner of the day with Dunkirk (Surfrider – Associate) in the last race. Dunkirk, with Akshay Kumar in the saddle, shot into the lead soon on turning for home. Sorry Darling, who was close behind Dunkirk, could not muster well enough and just went about the motions. Sun Dancer moved well to improve positions, while Sacred Lamp looked a threat as she covered the ground briskly and was gaining fast. Dunkirk however, held her own and weathered to brewing storm to clinch the issue by a narrow margin from Sacred lamp and Sun Dancer. Sorry Darling finished a tame fourth.

The Hyderabad Winter Season 2021 - 22 officially ended on 28th February 2022 and Champions in various categories were honored for their success after the last race.

At the request of the Owners and the Trainers of the Hyderabad Race Club, the Board of Directors of the Club resolved in their meeting on 22nd February 2022 to have three extra race days for the ongoing Winter Season to be held on 9th, 14th and 17th March 2022.

However, as per the Rules of Racing, the extra meeting held after the last day after the publication of the prospectus, will not be considered for the Championship of professionals.