EMPOWER POWERS HIS WAY TO VICTORY 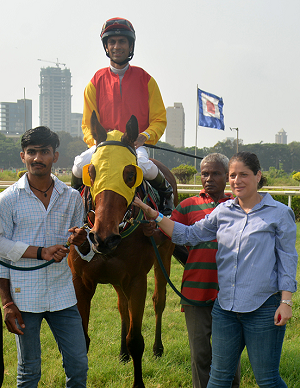 The Mumbai season concluded on a pleasant note with fancied runners, some with lucrative odds, and the form horses obliging right through the season. Ace trainer Pesi Shroff lived up to expectations and delighted his admirers by winning the Champion trainer title by a huge margin. He found able allies in jockey PS Chouhan and apprentice Kirtish Bhagat who won the champion jockey and apprentice titles respectively. The Shroff camp thus made a clean sweep of the season’s awards in the pro category. The Dhunjeebhoys were the leading owners while Usha Stud Farm was crowned the leading Stud Farm.

Sitting in the fourth position, Empower made a quick headway around the turn to be prominently poised behind early leader Toussaint on straightening up. Leto and Candescent Star went all out in chase of Empower in the final 300 meters. However, Empower kicked on relentlessly in the hands of jockey Trevor who ensured that the Nazak Chenoy trainee stayed well ahead all the way to the wire. Candescent Star did well enough to beat Leto for the runner-up berth.

MK Jadhav trained Fast Rain (Fast Company – Girl of the Rain, Villoo’s Greenfield) who made a late appearance on the track on the final day of the season, ensured that he gained to the fullest by winning his only start accomplishing the task with a touch of finesse considering his layoff.

Hilma Klint led them into the straight but Majorella Blue soon dashed ahead to take charge. Dali Swirl picked up well to challenge Majorella Blue which is when Fast Rain also unleashed his finishing run. Favourite Lord And Master could not muster well enough as he had done in his last victorious run and struggled to make any impact on the trio in front. Fast Rain, with jockey Parmar in the saddle, showed no signs of any rustiness as he galloped strongly at the finish to quell the dual threat fairly easily to pull off a commendable victory by a length. Dali Swirl ended a good second just ahead of Majorella Blue.

Mozelle (Roderic O’connor – Equine Lover, Villoo’s Greenfield) produced a blazing turn of foot to earn her first winning bracket on her third start. She set off fluently right from the start and looked the winner long way from home.

Mozelle, saddled by Altaf Hussain, accelerated smoothly in the straight and within a matter of strides, was miles ahead of the rest. Jockey TS Jodha’s only effort was looking back over his shoulder once he was safely ahead as Mozelle won by a huge margin of over six lengths. Montgomery improved positions to finish second ahead of Marine Girl and Mojo.

Tyron Black (Top Class – Eternal, Mukteshwar Stud) was another one who registered a maiden win in a clinical start-to-finish essay. The Narendra Lagad ward, on only his second start, raced to the front soon on start. Jerusalem, his main rival, settled in fourth initially but improved to be second at the turn.

Tyron Black, with Trevor in the saddle, proved too good to Jerusalem and company as he stretched out nicely to draw away. He galloped on effortlessly to score by over four lengths. Esperanza showed a bit of spark midway down the straight and even overhauled Jerusalem. However, she could not build on that momentum and worse, she let Jerusalem slip by and snatched the runner up berth at the finish.

Karthik trained Blazing Bay (Saamidd – Maria, Hazara Stud) also posted a start-to-finish victory, his third career win. Apprentice jockey Haridas Gore, who has shown fairly good potential in his first season, drove Blazing Bay to the front at the jump and got her going at a decent clip until into the homestretch. Campaign, who was in chase of the leader, tried to muster and offer a fight. However, Blazing Bay stretched out steadily and kept Campaign at bay all the way to eventually pull off a comfortable victory by close to three lengths. Campaign finished second well ahead of Anoushka.

Dowsable (Kingda Ka – Arta, Nanoli Stud) picked up her maiden win on her 15th start in a fine start to finish manner. She was off quickly and looked in command all the way into the straight. Suited Aces chased Dowsable from the start but could not step up her speed well enough. Jockey Prakash rode out Dowsable competently and steered clear of her rivals. The Faisal Abbas trainee galloped on gamely to post her first win comfortably. Power of Blessings, though never threatened the winner, did fairly well to pip Suited Aces for the runner up berth. Favourite Red Dust was prominent early in the straight, but just could not match his stablemate and ended a tame fourth.

SN Joshi’s Power of Neath (Phoenix Tower – Neath, Manjri Stud) scored his second win for the season (third overall) with a forceful start-to-finish run. Cipher chased him right from the start and ended second, without troubling the winner. Power of Neath looked well in command in the final furlong as he was safely ahead of his main rivals. Fancied runner Beyond Friends made a late appearance and all he could manage was a consolation of finishing in the money as he managed to pip Historic for the third spot.

Jockey P Trevor was the lone pro to score a double. The RWITC and its officials deserve praise for the successful season despite several obstacles, both foreseen and unforeseen. The committee steered through troubled waters and kept things afloat in a commendable manner with adept officials such as Secretary Niranjan Bhati who have the Club’s interests at heart at all times. The races were brought alive by the ever-dependable Deepak Rajpal and his colleague Anit Casyab who rendered the race commentaries astutely. It’s time for the horses to beat the Mumbai summer heat and hope for the Pune monsoon to break soon for the respite from the humid weather and regale in the pitter-patter that is to arrive in a few weeks.