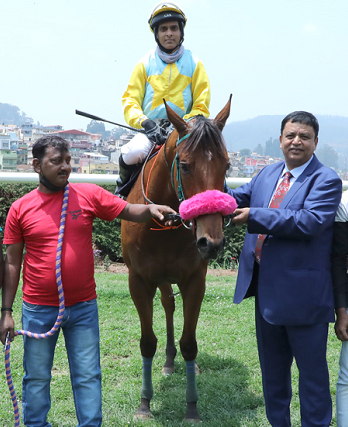 It was good to see local mainhope Remediesofspring come up trumps in the opening classic of the Udhagamandalam season.

The fashionably bred filly from the famed Usha Stud Farm, who had impressed most while shedding her maiden status in her first start at the Blue Mountains produced another stellar effort in the hands of Ashhad Asbar to emerge the best of her age and sex. The favourite Appsara from trainer Satish Narredu's yard, much to the disappointment of the followers of form performed below par and failed to make the frame, resulting in punters losing out big in the Nilgiris 1000 Guineas.

Priceless Beauty caught the eye while finishing second ahead of another Bengaluru challenger Queen Spirt from Sulaiman Attaollahi's yard and the Hyderabad hopeful Crimson Fire. Full marks to trainer Sebastian for sending out Remediesofspring spot on and the talented filly produced her best to the delight of the local camp.

Lucky Ashhad Asbar, who got a chance ride on the champion filly, replacing Nakhat Singh stole the limelight recording a fine treble on the classic day. The talented youngster first stunned the followers of form packing punch on the 15 to one shot Admiral Shaw, another winner from Sebastian's yard in the Forest Treasure Plate. The favourite Sinatra from B Suresh's yard, who was touted a `good thing' found the `Admiral' too hot to handle and had to rest content with second spot. Terminator from Deepesh Narredu's yard, who also had a fair share of his supporters failed to match strides with the first two, but it must be mentioned that this Deepesh ward after this run under his belt will prove to be different proposition next time out. Nakhat Singh, who was listed to partner Remediesofspring suffered an injury following a fall in the earlier event.

Priceless Ruler partnered by Nakhat broke down close home in the Star Baron Handicap run over a sprint and that provided Asbar an opportunity to showcase his skills on the local heroine in the first classic and Asbar in no mood to let the opportunity slip produced a copybook effort to the delight of Sebastian camp.

In line for a treble after is sublime effort in the first classic, Ashhad Asbar produced another stellar effort on the lesser fancied Ignorance Of Bliss to register a grand treble. Despite the fact that he was not favourably placed at the top of the straight, Asbar in determined fashion packed punch on the Anil Kumar, who responded gamely to her master's call, producing a fine turn of foot to collar the public choice Annexed and the second in demand at the betting ring Valeska close home in the Denny Crane Handicap run over a distance of 1300 metres. The superb effort proved to be a icing on the cake for the bookmakers, the well supported `Jodi' going out of the window much to the chagrin of the followers of form.

The well backed Senora Bianca proved too good in the concluding event, the upper division of the Doddabetta Handicap run over a sprint. The five-year-old mare who looked a picture of fitness at the parade ring provided apprentice jockey Gaurav Singh an arm-chair ride to success, bolting in much to the relief of most railbirds who had suffered a series of losses, favourites taking a back seat after the public choice Price Striker won the opening event in emphatic fashion.

Senora Bianca on the strength of this performance is set to provide an encore while it will also pay to follow Break The Silence if her connections choose to quickly race her again. Majestic Charmer in the hands of leading pro Umesh managed to save money in place finishing third ahead of Tifosi.

Earlier, the lesser fancied Hallucinate from trainer Robert Foley's yard edged out rankoutsider Symphony In Style and the favourite Excellent Sar in the Mountbatten Handicap. The winner piloted by five kilo claimer Farid Ansari dug deep into her reserves and produced the extra effort which helped her stand tall at at the podium. All credit to Ansari who held his nerve in a thriller. The runner-up Symphony In Style, it is needless to mention will benefit most from this eye-catching effort and is one for the notebook.

On the strength of her four victories from her five starts at Chennai, Anastasia from Deepesh Narredu's yard was rightly fancied strongly to to romp home in the Star Baron Handicap. But the on-money favourite after raising hopes travelling nice and easy for most part of the sprint trip lacked the gas to justify favouritism and only managed to finish a poor fourth behind the third placed Wind Symbol. The five to one shot Alexander Dumas from Fazal-Ur-Rehman's yard confidently piloted by Sai Kiran appeared to have improved most after his second behind Hope And Glory last week. The winner after tracking the public rage zoomed past Anastasia to score in style and is set to provide an encore when saddled next.