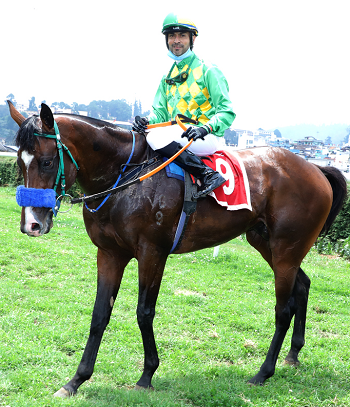 Wow! two classic results in their favour and mission accomplished it proved to be for the local trainers,who delivered a knock-out punch to a couple of leading trainers from Bengaluru and Hyderabad who were of the view that picking up a classic at Udhagamandalam was as easy as stealing candy from a kid in a sweet shop. The kid brothers pulled the plug and blew the fuse on the face of the self proclaimed big brothers who bit the dust.

After the overwhelming favourite Appsara from trainer Satish Narredu's yard and the Sulaiman Attaollahi schooled Queen Spirit failed to make an impression in the 1000 Guineas on Saturday, Star Glory from Satish Narredu's yard and Pavarotti from the stables of Neil Darashah were fancied most in the Nilgiris 2000 Guineas. The Sequeira -trained Kancha and True Icon from Ravinder Singh's yard spearheaded Hyderabad's challenge, but it was the local hero Still I Rise from Dr.Anil Kumar's yard, who emerged the best colt in the campus at the Blue Mountains, donkey-licking his more fancied rivals from Bengaluru, while providing the local trainers a reason to smile. It was a week the locals will cherish most successfully hunting and cooking the outstation Goose.

Pavarotti and Star Glory opened favourites in the second classic of the season before money came pouring in on the Satish Narredu colt who had chalked out two facile wins from his last two starts. Unlike the winner of the 1000 Guineas, Remediesofspring, who was in with a definite chance and was second in demand at the betting ring, local hopefuls including Still I Rise had no takers,in the 2000  Guineas event run over a distance of seven furlongs. Star Glory was the piping hot favourite and Pavarotti too did have his fair share of supporters while the rest including the Hyderabad challengers were ignored in the betting ring. Never mind the form and the top billing. Local hero Still I Rise from Anil Kumar's yard decided to write a different script and the locals enjoyed the classic drama on the big stage. Star Glory in his effort to record a hat-trick and register his maiden classic success flopped badly and finished a poor fourth, while Pavarotti performed like a dud.and so too Kancha. True Icon's runner-up effort was noteworthy, but the fact that two local horses won the first two classics was the real icing on the cake.

The concluding event, the Draco Handicap saw the favourite Proposed from trainer Ramanathan's yard edge out the front running Sabatini to the delight of the railbirds, who returned home evens-stevens, three firm favourites coming through in the six-event card. Ramanathan and apprentice jockey Gaurav Singh who had combined effectively to score on Senora Bianca, a well supported  favourite in the final event on Saturday repeated the act, Gaurav Singh booting home Proposed in the concluding event on Sunday. The heavily backed public choice after gaining a favourable position early on in the race produced his best in the final furlong to snuff out the challenge of Sabatini and romp home a convincing winner. Air Marshall finished third ahead of The Intimidator, while Heidmar, it must be mentioned was never in the hunt.

Earlier, the Fazal-Ur-Rehman schooled Streek landed a successful coup in the hands of Rajesh Kumar in the opening event, the Kodanad Handicap run over a sprint. The winner backed to the exclusion of her nine rivals proved too good,  cruising home without unduly being extended and on the strength of this effort is certain to provide an encore. Grey Twilight impressed most from the beaten brigade gaining the runner-up berth ahead of Shadow Of Love whie Protea completed the frame.

The Stewards Trophy saw the last year's Stayers' Cup winner My Opinion produce a sterling effort  over 1500 metres to come up trumps. The five to one shot piloted by apprentice jockey M S Deora unleashed a stunning turn of foot to down the favourite New Look from Ravinder Singh's yard, who in her attempt to make every post a winning one had drawn clear before going down to My Opinion in the final furlong. Mzilikazi finished third ahead of Emelda, while Night Hunt and the topweighted Historian were only testing the conditions before staking their claims in the weeks ahead.

Despite the fact that the Rupa schooled Karadeniz had beaten Sasakwa in his last effort , Sasakwa under the care of Robert Foley was surprisingly fancied to score in the Pablito Handicap run over a sprint. Sasakwa in fact was quoted at (2/1) while Karadeniz was freely offered at (4/1) in the bookmakers' ring. Karadeniz to the delight of Rupa again beat Sasakwa and the supporters of the winner were immensely pleased with the returns, double the price offered to beat arch rival Sasakwa and Karadeniz happily repeated the dose. Pappa Rich caught the eye while finishing third and it will not be long before this Krishna ward gets into the winners' circle.