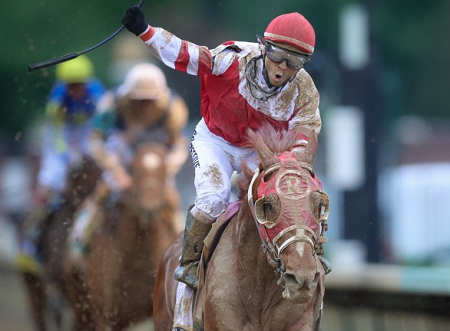 Rich Strike caused one of the biggest upsets in Kentucky Derby history with a remarkable 80-1 success for trainer Eric Reed.

The story of the race was an eyewatering early gallop and the son of Keen Ice took full advantage, charging down the inside rail past race favourite Epicenter in the final furlong under Sonny Leon, stunning the 147,294-strong crowd at Churchill Downs.

The result marked a second year of heartbreak for Jim McIngvale – better known as Mattress Mack – who followed up last year's $2.4m loss on Essential Quality with a $1.5m bet on Epicenter.

The longest shot in the betting and the second-biggest priced winner in the history of the Kentucky Derby, it was almost a carbon copy of Mine That Bird’s victory in 2009, with commentator Travis Stone only realising Rich Strike's astonishing late run in the final strides of the race.

To say Rich Strike was a surprise winner would be an understatement, having been claimed for just $30,000 last October and arriving at Churchill Downs winning just one of his seven races.

Even his participation in the race was a surprise, as he sneaked into the race after the withdrawal of Ethereal Road just seconds before the scratch time deadline.

"What planet is this? I feel like I have been propelled somewhere. I'm not sure," winning owner Rick Dawson told Bloodhorse.

"This is unbelievable. I asked my trainer up on the stage, I said, 'Are you sure this is not a dream? Because it can't be true.' He assured me this is real."

It was a landmark victory for Venezuelan jockey Leon, who was riding at his local Belterra Park in Cincinnati on Friday and was the leading rider at Mahoning Valley near Cleveland, Ohio, for the last three years.

"I didn't know if he could win but I had a good feeling with him," Leon told Bloodhorse. "I had to wait until the stretch, and that's what I did. I waited, and then the rail opened up. I wasn't nervous. I was excited. Nobody knows my horse like I know my horse."

Epicenter, the 4-1 favourite for Steve Asmussen, emerged with a huge amount of credit, having raced with the unsustainable early pace before digging in bravely to fend off Zandon in a protracted duel which looked set to determine the winner for much of the straight.

It was the third Kentucky Derby runner-up for Asmussen, who is yet to win after 24 attempts.

It was almost parallel to his record-breaking Super Bowl bets in which he wagered $9.5m on the Cincinnati Bengals to beat the Los Angeles Rams in Super Bowl LVI, a game they lost 23-20 in the dying seconds.