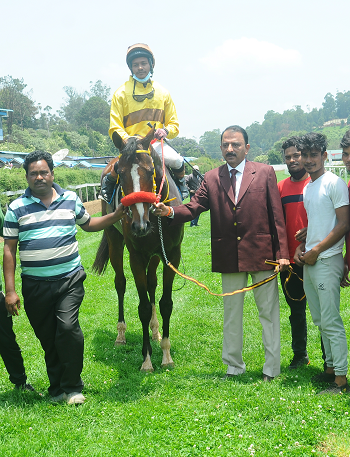 The public choice Big Treasure from trainer Ramanathan's yard, who is enjoying a good run, proved too good in the opening event, the six-year-old mare piloted by apprentice jockey Gaurav Singh cruising home without unduly being extended. The winner, who had consistently produced some good performances in the morning trials was strongly fancied and the Ramanathan ward to the delight of the followers of form and more importantly the track reporters, who were bullish of her chances powered home in emphatic fashion. Maranello gained the runner-up berth ahead of Lady Zeen.

On the strength of her couple of impressive efforts, Shez R Star from Dr Anil Kumar's yard was backed to the exclusion of her eight rivals in the lower division of the Nilgiris Police Cup run over a distance of 1300 metres and the public rage provided jockey Ashhad Asbar an arm-chair ride to success, romping home in resplendent style. The winner owned by Cheriyan Abraham is in rousing form and is certain to provide an encore when saddled next. Rubert finished second ahead of Memory Lane, while Saint Emilion completed the frame.

The upper division of the plum event saw lesser fancied Kings Walk from trainer B Suresh's yard  produce a winning gallop to floor the top fancy Romualdo from Sebastian's yard and the second in demand at the betting ring, Loch Lomond from the stables of James Mckeown. The winner confidently piloted by Sai Kumar produced his best when it mattered most to come up trumps and on the strength of this splendid debut success is certain to progress and scale higher up the ladder in the weeks ahead. Nightjar from Robert Foley's yard caught the eye, while gaining the runner-up spot ahead of the public choice Romualdo and is one for the notebook, while Loch Lomond completed the frame.

After the first two events were claimed by the top fancies, the on-money favourite Gangster from Behram Cama's yard  donkey-licked his rivals in the Wandering Angel Handicap run over a distance of 2000 metres. The favourite guided home by the promising apprentice M S Deora galloped home without a fuss and taking into account that this Behram Cama ward is in good nick, it will pay to follow Gangster again in his next effort. Moresco followed the winner home while Royal Treasure took the third spot ahead of Kikata.

After the success of Kings Walk and the fact that Star Symbol had finished second behind Off Shore Breeze in his last start, the B Suresh ward was fancied most in the Starry Eyes handicap run over a mile, but the favourite met a tartar in Grandiose, who in the hands of an in-form Ashhad Asbar raced through to steal the limelight. Rays Of Sun finished third behind the well supported favourite Star Symbol, while the topweighted Knight In Armour leisurely made the frame.