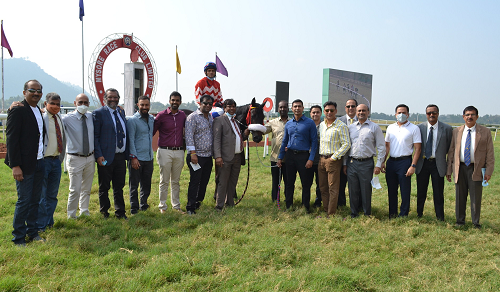 Big syndicate ownership is the new mantra and this is certain to provide a new dimension to horse racing. Now you can become a owner investing less than Rs 50,000 and maintenance of the animal will cost you just Rs 1,000 much, lesser than the amount you are paying out for the maintenance of our flat. You couldn't do it earlier, but now it is possible and and most members of the race clubs are lining up to gain and pin an owner's badge on their coats before they proudly walk into the paddock. The syndicate ownership is the hot topic of discussion in the racing circles and at a time small owners are finding it tough to survive, hit hard by the 28 percent GST tax slab and the poor stakes on offer, the new easily affordable funda has provided hope and support and many small investors are fast running to the legal eagles, seeking advise to form different syndicates, be it a all female syndicate or a 20 or more movie stars partnership, which will also help provide the glamour and glitz to the sport.

Apana Subaiya and Gautam Basappa, who struck it rich with War Hammer, winner of the Bangalore winter and the Mumbai Indian Derby initiated the move to form big number syndicates. Apana who played a stellar role in making this work revealed that the idea was to make a start with a few racing buffs at a small centre and Mysore Race Club was the first choice taking into account that his group saw big potential, following many youngsters gaining club membership and more importantly ready to make investments in the game.

Syndicate ownership was not new, but Apana and  Gautam Basappa with the forming a syndicate of 45 owners set a unique record. Mysore Race Club member and Bloodstock Agent, Som Somanna also played a key role in driving this initiative and was responsible for selecting Flamingo Dancer (Sanus Per Aquam [IRE] – Flamingo Fan [USA]) from the Kunigal Stud Farm who made a winning debut and makes it an interesting and exciting tale to narrate. "It simply was a dream come true for the biggest owners syndicate in Indian racing. They just couldn't believe it and it took some time to sink in," said Apana pointing out that many other members are coming forward and soon many partnerships will procure pedigree stocks which will help the breeders continue to make available quality stocks at their farms.

Earlier spearheaded by lady jockey Silva Storai, former International basketball star Nandini Basappa and fashion diva Judy Bidappa a couple of 10-member syndicates were formed and horses under the care of Irfan Ghatala piloted by Silva Storai chalked out many wins before the one-leg partnerships came into play and quarter share investments kept the ball rolling. Apana disclosed that getting 45 into one boat was a tough exercise particularly with a large number of individuals not knowing how it all works, "but we patiently cleared all their doubts while keeping their interest going and we are immensely pleased that it happily happened, "said Apana. The lucky horse owner with three Derby victories to his credit, Apana made it clear that the dynamic Mysore Race Club managing committee led by chairman Y B Ganesh provided the desired support and encouragement and this helped in their endeavour. The club gave the green signal to form Limited Liability Partnership (LLP) of 48 race club members only and when pointed out that many non-members too are interested, Ganesh said: "For a start we have allowed only members of the club to form syndicates. We have not opened it for all fearing many benami owners gaining an entry and spoiling the party," said Ganesh.

Well  Apana is delighted that many more ownership syndicates will be formed in the months ahead at Mysuru and it is also learnt members from the other racing premier racing clubs too are designing the many plans to emulate the Mysuru mantra which will put racing back on even keel in the years ahead.