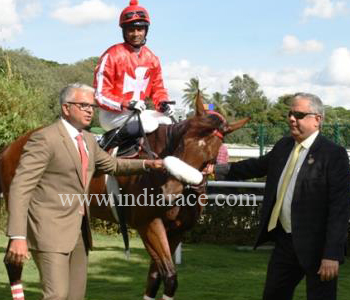 We told you that Forest Flame is back in business after she started her summer campaign on a winning note and that she will pick up a couple of plums this season, now that she has completely recovered from left hind leg injury she sustained while travelling to Mumbai in December last year. The classic winner proved us right. Up against a couple of star performers including the classy filly Miracle from Pesi Shroff’s yard in the Krishnaraja Wadiyar Cup run over a mile on Sunday, Forest Flame produced her best in the hands of leading pro Sandesh to romp home a deserving winner.

After tracking Chopin, stablemate of Miracle for most part of the trip, Sandesh reminded the Sulaiman Attaollahi schooled classy filly the task ahead and the star performer readily produced an astounding gallop approaching the distance post to put the issue beyond doubt. Giant Star surprisingly gained the runner-up spot ahead of A Star Is Born, while Miracle returned home lame.

A delighted Chaduranga Kanthraj Urs who vociferously cheered home his filly revealed that next Forest Flame will compete in the Maharaja’s Cup and in this major plum she is likely to lock horns with the champion filly Juliette from trainer Karthik Ganapathy’s yard who impressed most in a mock race later in the day. “It will be a good race and I’m looking forward to the big battle,” said Kantharaj immensely pleased with Forest Flame’s second straight success.

“She appears to be enjoying the climate and conditions here and she is on top of her game. And she will make her presence felt against the best in the campus,” said Kantharaj, while adding that Arcana who produced a lacklustre effort after his smashing debut at Malakpet will bounce back and prove his mettle. He is a very speedy colt and shockingly the rider didn’t allow him to get to the front when he was crying to get ahead and sprint. You don’t restrain or check a speedy horse. You exploit his strength. The jockey simply rode against the instructions,” said Kantharaj.

The principal added attraction, the Mayor’s Cup was claimed by the strongly fancied All Attractive from Lokanath Gowda’s yard. The winner, who had caught the eye while finishing an impressive third behind the triple classic winner Miracle in his last start over a mile was backed to the exclusion of his eight rivals including the Mumbai challenger Presidential. And the smart winner readily justified the confidence of his supporters putting the race to bed even before the final furlong. Leading pro Akshay Kumar who guided the Lokanath ward earlier booted home Shubankar from trainer Warren Singh’s yard and later completed a grand treble packing punch on the Prasanna Kumar-trained Scribbling Hopper.

Astride the lesser fancied Shubankar who looked a picture of fitness at the paddock parade, Akshay took the grey to the front and dictated the pace before outwitting his six rivals to the delight of trainer Warren Singh who led in his second winner this season after Acaster’s splendid effort in the concluding event on Saturday. Mrs Thatcher finished second ahead of the favourite Super Ruffian, while Russian Romance after promising to add pep to the finish only managed to complete the frame.

In line for a treble, a confident Akshay partnering the overwhelming favourite Scribbling Hopper in the Royal Command Plate run over a mile, really didn’t need to exert himself, the Prasanna Kumar ward storming through to seize the initiative when the race came on a boil and quickly putting the issue beyond doubt in the final furlong. The sporting owner Manoj Kumar back last night after a holiday in Turkey proudly walked in to lead Scribbling Hopper who is likely to complete a hat-trick of wins when saddled next. Measure Of Time from Faraz Arshad finished a game second ahead of Tyto Alba. The runner-up appears in good nick and it will not be long before Measure Of Time earns his summer cornbill.

The topweighted Millbrook from trainer Arjun Manglorkar’s yard produced a gutsy pillar to post effort in the hands of John to come up trumps in the upper division of the Ich Dien Plate run over a sprint. Coming under pressure from the favourite Clever Hans on one side and the other fancied contestant Tenali on the other side, John in determined fashion relentlessly drove the Arjun ward who in a never-say-die bid gallantly hung on to emerge a plucky winner. Tenali edged out Clever Hans by the shortest of margins to gain the second place while Impeccable finished fourth.

You got to doff your hat to the Zareer Darashah family. They simply love the sport and the sporting events, be it racing, cricket, tennis or athletics. Zareer was a national sprint champ before he got his licence to train horses and his son Neil Darashah like his grand dad Shafi Darashah played good grade of cricket before choosing to do what his dad did best, training horses at this campus. The four including Anneka cheered home the ten to one shot, Artemis Ignacia, a smart winner on debut. The favourite Royal Glory from Padmanabhan’s yard who lacked early speed and as a result graced the wrong end of the field for most part of the sprint trip galloped well towards the end to take the runner-up spot ahead of Chinky Pinky.