MICHIGAN MELODY ONLY FAVOURITE TO SCORE 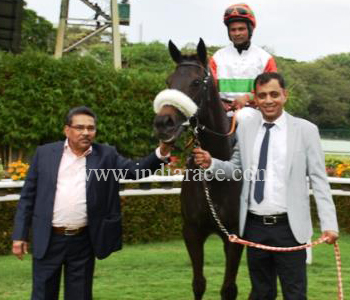 On the eve of the first classic of the season, the Fillies Championship Stakes, most lesser fancied contestants waltzed to victory to the delight of the bookmakers while public choices, much to the disappointment of the punters chose to take a back seat.

Ajinkya, who piloted Unyielding combined successfully again with Darius in the upper division of the event, making every post a winning one on the six to one shot Fernet Branca. The winner, who had impressed most while winning, his last start in winter came under pressure in the final furlong from the second in demand at the betting ring See My Heels, who was hanging in and that helped the winner hang on to the lead and provide his trainer a long-priced double. The Response did well to gain the third spot ahead of Perfect Rendition. The favourite Realia and Benediction were in no mood to get into the gates and the starter was left with no choice, but withdraw the two at the gates.

The Pradeep Annaiah schooled Limited Edition was fancied most in the Royal Challenge Plate run over a distance of seven furlongs despite the fact that he walked out of the gates in his last start. This time out Limited Edition jumped out well and tracked the lesser fancied stablemate Klockner before Vivek in the whipless event pushed hard to get his head in front, but Klockner in the hands of four kilo claimer Salman relentlessly stuck to the task and snuffed out the challenge of his fancied stablemate, much to chagrin of the big bettors, who backed the favourite from (2/1) to (14/10). Smile Around finished third ahead of the topweighted Elite Agent who raced in patches and never was really in the hunt.

On the strength of his satisfactory effort in his last essay over a mile in a much tougher company, the Padmanabhan schooled Turkoman was backed to the exclusion of his seven rivals in the Dupont Plate, but all that the overwhelming favourite did was take a lot of good money down the drain failing to even make the frame. The seven to one shot Noble Ruler from Ganapathy’s yard powerfully piloted by Imran Khan produced a winning gallop close home to down Osibisa and the more fancied stablemate Lightning Flame piloted by Dashrath Singh.

Making his debut, the Arjun Manglorkar schooled Aldgate, who was consistently producing smart performances on the trial track was fancied most, but the public choice in the hands of leading pro Trevor Patel headed the front runner Konabos before the Prasanna ward regained the initiative and romped home a convincing winner of the Sir Cecil Cup. Arrowette continued to disappoint finishing a tame third ahead of Ripple N Storm, who appeared to have improved after his listless last start.

The feature event, the D Kumar Siddanna Memorial Trophy run over a sprint saw the solitary favourite Michigan Melody from Azhar Ali’s yard produce a sparkling gallop in the hands of Arshad Alam and power home a deserving winner. The in-form mare on the strength of this effort is set to provide an encore. General Patton gained the runner-up berth and it will not be long before the `General’ takes the salute this summer.

A shock last start winner, Only You was one other strongly fancied favourite from Padmanabhan’s yard who bit the dust. Competing in the Noble Prince Plate run over 10 furlongs, Only You was locked in ding-dong battle with the Satish Narredu schooled Windstorm in the final furlong before Darshan astride the lesser fancied contestant streaked ahead to the delight of the Satish Narredu camp. Muirfield finished third ahead of the Aravind Ganapathy-trained Serdar, who performed below par.

Satish Narredu struck again in the next event to share the professional honours with Darius and Ajinkya, recording a double through Star Domination. The winner in the hands of Kiran Naidu produced a good turn of foot to collar the front runners, Je Ne Sais Quoi and Marco Polo and gallop home in emphatic fashion. The topweighted Queen Regnant was seen purposefully finishing at end to take the second spot and is one for the notebook, while Embosom’s effort after his impressive last essay was too bad to be true.