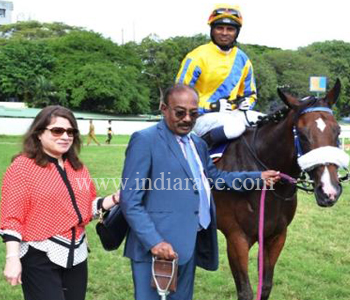 You can’t ignore leading trainer S Padmanabhan when clicking the big classic picture. He simply would want to be a part of it and he will make sure that he is in the classic scene. The champion pro, who struggled all winter, horses under his care performing below par and the bad patch continuing in summer too struck it rich when it mattered most, proudly leading in Philosophy, the winner of the first classic of the season, the Fillies Championship Stakes on Sunday.

Second in demand at the betting ring, the talented daughter of Speaking Of Which from the famed Usha Stud Farm, Philosophy, who went down fighting to the unbeaten colt Once You Go Black , produced her best in the hands of top pro Sandesh to emerge the best of her age and sex in emphatic fashion.

The Mumbai hopeful King’s Ransom from leading pro Pesi Shroff’s yard garnered the maximum support in the betting ring, offered at (16/10) while Philosophy was easily available at (9/2) and Crown Consort, who made a winning debut was offered at (6/1), while the rest of the 10 fillies in the first classic were quoted at 10 and more, Stellar Role the least fancied at (50/1).

Nohoper Place Vendome from Sulaiman Attaollahi’s yard set a decent pace all through the backstretch in the mile long classic journey. Sandesh astride Philosophy chose to track King’s Ransom, while the connections of Crown Consort chose to race the filly in the front group. Place Vendome shot her bolt at the top of the straight and before the Chennai challenger Dangerous from Adhiraj Jodha’s yard piloted by Chotu Singh Jodha took charge, Sandesh packed punch on Philosophy and the Padmanabhan ward readily produced a sparkling gallop to assume command before putting the race to bed in the final furlong. Dangerous who had shocked King’s Ransom in her earlier start at Mumbai did it again gaining the runner-up berth ahead of the public choice King’s Ransom, while Crown Consort managed to complete the classic frame.

Sandesh who stole the limelight on the classic day, earlier booted home the lesser fancied Lucky Chance from trainer Dominic’s yard who produced his best to come out tops in the Stewards Cup run over a sprint. The Prasanna Kumar schooled Obsidian was fancied most on the strength of his facile victory in Chennai during the Invitation Cup week-end, but the top fancy after being favourably placed at the top of the straight lacked the gas in the tank to make a race of it and eventually failed to save money in place.   The topweighted Psychic Warrior piloted by promising apprentice Arul finished second ahead of Cavallini, who caught the eye covering a lot of lost ground at the start.

In line for a hat-trick after his success in the first classic, Sandesh guiding the fortunes of the eight to one shot Multistarrer from Imtiaz Sait’s yard  found himself gracing the wrong end of the field before the 10 contestants negotiated the final curve.   But the top gun in a never-say-die bid pushed the Imtiaz ward hard to gain a few places slowly and yet surely before driving home the winner from last to first to the delight of his few supporters. An impressive last start winner, Siege Perilous from Prasanna Kumar’s yard, like Obsidian failed to display his true potential and finished in the ruck. Capable who caught the eye while finishing a creditable third in her last essay went one better and Pink Jasmine came home third ahead of Winmylove.

Despite the fact that the Parvati-trained Matera burst his blood vessels and finished down the field in his last effort in winter, most big bettors chose to punt big on the Parvati ward taking into account his pleasing movements on the trial track and the fact that he was contesting in the lowest class. But the overwhelming favourite in the hands of Oliver Richard again flattered to deceive and that effectively saw most railbirds return home with a big hole in the pocket. The second in demand at the betting ring, Gold Gray piloted by apprentice Siddaraju came up trumps in the concluding event run over a sprint. Handsome Rocky flashed home late on the scene to take the second spot ahead of Matera and is one for the notebook.

Oliver, earlier partnering another Parvati ward Electric Blue after finishing second behind Ashwa Magadheera lodged a protest against the winner for taking his ground when his mount was full of running in the final furlong, but the stewards not impressed, rightly and quickly threw out the protest . Incidentally Ashwa Magadheera was the lone favourite to score in the eight-event card. Only two favourites Michigan Melody and Ashwa Magadheera winning in the 16-event card during the two-day week-end resulted in most punters losing out big and it will take a while before the punters recover from this beating.

Champion trainer Arjun Manglorkar who is enjoying a good run dropped a bombshell, the friendless 25 to one shot Pinnacle Point in the hands sof Nazil edging out the lesser fancied Monteverdi from Kolkata based trainer Vijay Singh. In fact the most fancied contestant in the Rare Gem Plate was Vijay Singh’s other runner, Tycoonist who was withdrawn at the starting gate . The Kiefer too was sweetly fancied by the Imtiaz camp but she found the pace too hot to handle . Prime Abbess from Padmanabhan’s yard  caught the eye, finishing an impressive third covering acres of ground in the straight and it will surprise most if this filly fails to enter the winners’ circle when next saddled.

Promise Kept from Arjun Manglorkar’s yard  powerfully piloted by Trevor Patel and Altair from the stables of Sharath Kumar were the two other winners. The former struck it rich in the K S Prasad Memorial Trophy, while Altair won the opening event in convincing fashion.