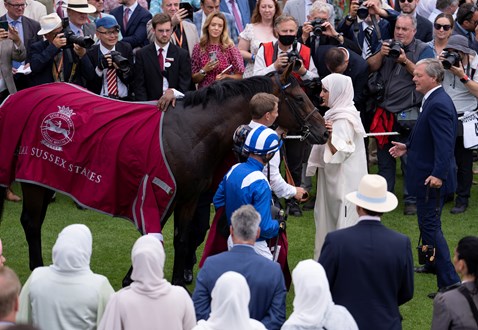 Baaeed , currently the highest-rated horse on the planet, took his unbeaten record to nine with a comfortable victory in the Qatar Sussex Stakes (G1) July 27 at Goodwood. The race is part of the Breeders' Cup Challenge Series, with the winner receiving an automatic berth into the FanDuel Breeders' Cup Mile (G1T) Nov. 5 at Keeneland Racecourse.

Registering his fifth group 1 win in succession, Baaeed was perhaps not as explosive as he has been at times in the past, but he never looked likely to come unstuck as the 1-6 favorite, hitting the line strongly to defeat 2021 Breeders' Cup Juvenile Turf (G1T) victor Modern Games  in second, with last year's winner Alcohol Free  in third.

On what was likely to be his last start at a mile, Baaeed was anchored towards the rear under Jim Crowley as Japanese raider Bathrat Leon  set a strong early pace, before moving through stylishly from the two-furlong maker and quickening clear of his rivals close home.

Next stop for the son of Sea The Stars  appears to be York and the Juddmonte International (G1) Aug. 17, a race that will see the best horse in the world stepping up to a mile and 2 1/2 furlongs for the first time, with Paddy Power keeping his price unchanged at 4-7 for the group 1 contest.

"He just does what he has to like his sire did," Crowley said. "Just before the winning line, he flicked his ears and completely shut down with me. It's a pleasure to be part of the journey.

"He's never going to be exuberant and win by 10 lengths, but the feeling I got from him between the three and the two (furlongs), no horse can give you that sort of feel. He's got everything. Good horses like that tick all the boxes.

"It will be really interesting when he goes (just over) a mile and a quarter next time, and I'm really looking forward to it."

Winning trainer William Haggas pointed firmly to York and the International next, with a trip to Ascot on British Champions Day beyond that likely to be the last start of Baaeed's exceptional career.

Haggas said: "He's got speed, and he's got class, and I'm really looking forward to it (stepping up in trip), and I think he'll enjoy it. We've got him for two more races, so let's make the most of him and enjoy him because he's very likely to go to stud at the end of this year. That will be it, and then I'll spend the rest of my training career trying to find the next one."

Buick said: "That was a great run. We were racing for second, and that's where he finished. It was nice for him to come back to that form. The winner is an exceptional horse."

Andrew Balding, trainer of third-place Alcohol Free, added: "She's run a marvelous race and stayed on right the way to the line. She's really developed into a fantastic-looking race mare, and we're thrilled with her. We've entered her in everything from six furlongs to a mile, and all things are possible."