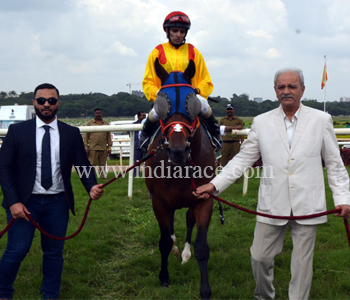 Young Shazaan Shah trained gelding Joaquin (Saamidd – Phoenix) proved his versatility when recording his seventh career win in the Gamble For Love Trophy, the main event on the inaugural day of the Pune racing season 2022. S. Zervan settled Joaquin behind St Andrews led briefly before being overtaken by Victorious Sermon, who was brushed after a slightly slow beginning to head the field with a furlong from the start. Joaquin was pushed into the lead as the heads turned for home and he had the cushion of a two-length lead which came in handy when Sunrise Ruby launched her assault. The winner spared Sunrise Ruby a length at the wire but what make his victory significant is the fact that he was giving her 11.5kg weight. Favourite Enid Blyton also favoured by the handicap did not raise any hopes for her followers as did Endeavour, who ran below expectations. Enid Blyton ended in the money with Endeavour three parts of a length away. The winner’s stable mate Gazino had a forward run and finished a fair fifth ahead of late finishing Grand Accord. Victorious Sermon tired out to finish second last.

Another youngster Aditya Jadhav also saddled an impressive winner in Fast Rain (Fast Company – Girl of the Rain) who was partnered confidently by Nikhil Parmar. Speedy Cellini assumed command shortly after the start as Son Of A Gun and Fast Rain decided to chase him. Son Of A Gun failed to quicken when Trevor Patel alerted him on the other hand Fast Rain gave a splendid response to Parmar’s call and zoomed past Cellini in a trice. Fast Rain drew away to claim the DK Ashish Trophy fluently. Son Of A Gun was hampered slightly when the winner overtook him but for which he would have finished runner-up and not third behind Cellini. Remus, the third favourite, was left standing in the gates which proved costly for his followers.

Parmar completed a back-to-back double when Altaf Hussain trained filly My Princess (Tamayuz – Qawaafy) cashed in on her fitness and made a winning debut. House Of Lords took charge from Balenciaga as the heads turned for home while My Princess decided to make her presence felt. House Of Lords fought valiantly for a couple of strides but couldn’t repel the winner’s onslaught. Runner-up Fiery Red found her rhythm a trifle late and then the winning post came too soon as she devoured good ground towards the end. House of Lords ended a tame third.

The Awakening, one of the three fancied runners in the race, was taken on a start to finish mission by Yash Narredu almost pulled it off before Hosidar Daji trained Baby Bazooka (Kingda Ka – Bullseye) wore her down in the last couple of strides. Apprentice rider A Prakash brought the bay filly into contention as the heads turned for home and drove her confidently to pip The Awakening in the shadow of the winning post. Spring Cove ran thereabouts to finish third. Raffaello lay at the end of the field till the turn and came wide into the straight to finish in the judge’s frame. Favourite Exclusive failed to accelerate after being in the vanguard till the bend and ended a disappointing fifth. Superleggera ran easy throughout and ended an uninterested sixth.

Dallas Todywalla schooled Rodrigo (Roderic O’Connor – Ray Of Light) raced alongside no hoper Sovereign Master till the horses entered the straight and then stepped up pace to thrash his opponents. Favourite Magileto lay in the mid bunch till the field straightened for home and appeared on the scene far too late to play second fiddle to the winner.

Faisal Abbas claimed both divisions of the Beyond Expectation Plate with Anoushka (Leitir Mor – Aemilia) and Cipher (Excellent Art – Mooring). Despite being entrusted to lesser known rider Amyn Merchant and being a maiden Anoushka was heavily backed in the betting ring. The mare readily obliged when unleashing a superb run and putting paid to the hopes C’est L’Amour) who shaped as winner after second favourite Historic packed up after showing the way to the field till the final turn. Caprifla ran on late to save place money ahead of the winner’s stablemate Nusrat, who let her barn-mate hog the limelight. Royal Castle’s late rally was too good to be missed and he should be in the news soon if he shows the same zest.

The day on a dramatic note when Brilliant Light drifted out alarmingly with just a furlong left for the wire. Brilliant Light, who had hit front after coming from the widest draw and was racing close to the rails, appeared to be coasting home for her maiden success till her notorious trait of veering out so much that she reached the outer rails. It was a miracle that apprentice Haridas Gore managed to stay in the saddle despite the filly even brushed the green bushes near the outer rails.

Beemer, who was following Brilliant Light took over the mantle and flattered briefly before her hopes were dashed by Cipher. The mare came with a flourishing run from way behind and sailed away for a comfortable win and helping apprentice Prakash complete a winning brace. Jack Bauer and Tristar managed to figure on the judge’s board rather reluctantly.