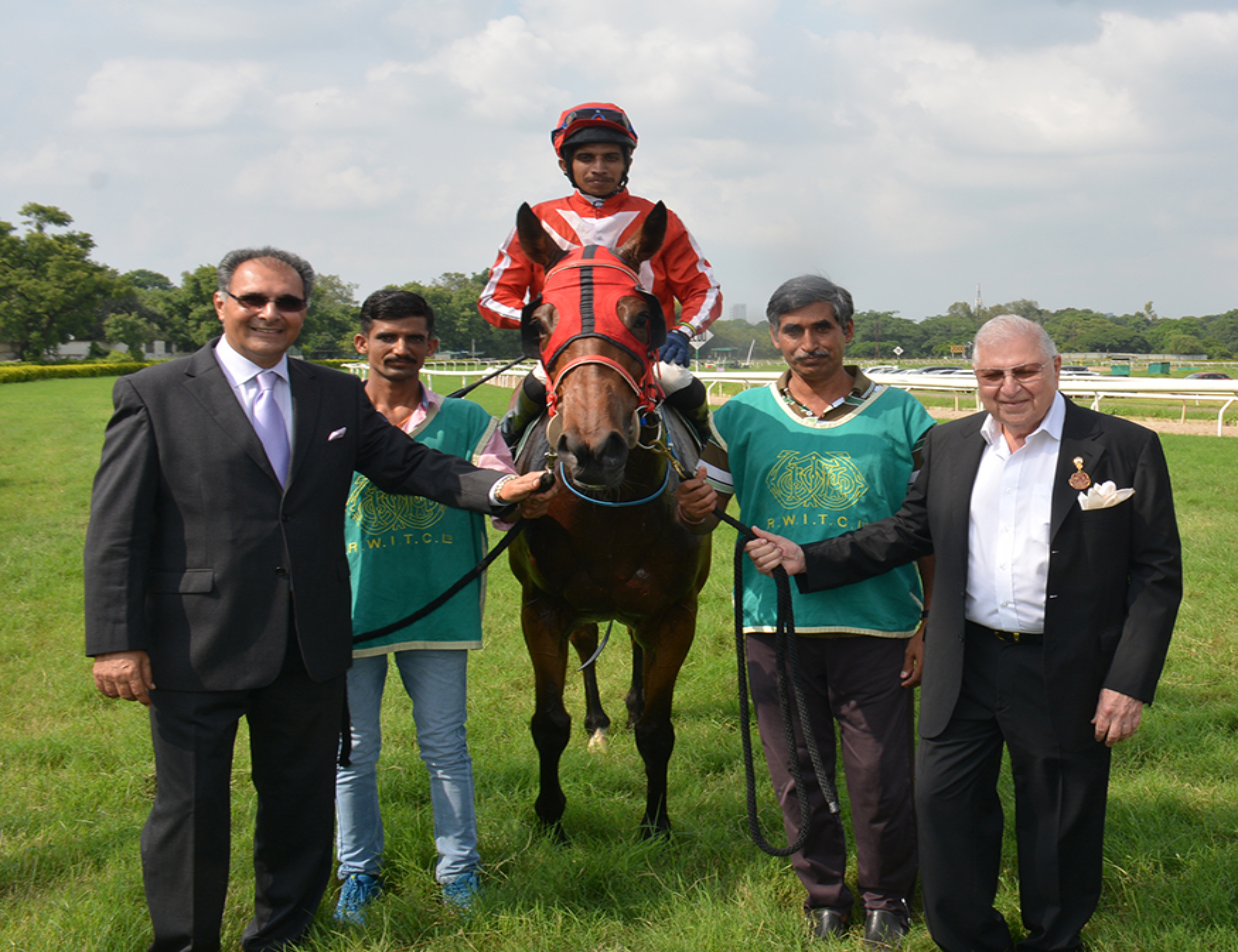 Having caught a tartar in Nothing To Worry when finishing runner-up twice in her previous two runs at Mahalaxmi Racecourse, Sky Fall (Leitir Mor – Classic Sky) was packed with enough speed on this occasion which ensured that she was not going to be unlucky for the third time. The Dallas Todywalla nurtured mare eventually made her way to the winner’s enclosure after showing a clean pair of heels to her rivals in the Dr SR Captain Trophy. Apprentice PS Kaviraj was quite composed astride the mare as she shot into the lead and he gave her just a couple of backhanders in the straight to keep reminding her of the unfinished task ahead. Sky Fall stretched out magnificently to win untroubled in the end. Market King, who ended second, seemed content in having a feel of the new track as he finished second ahead of favourite Petronia who was outpaced by the winner. The Protector and Kinnara ran without much intent and finished fourth and fifth respectively. Sky Fall was Kaviraj’s second winner of the day. Ahead Of My Time (Excellent Art – Danehill Star), who is bred as full brother to the two classy sprinters, Ruffina and Corfe Castle, made a grand winning debut on the Pune racetrack. The overall anxiety that prevailed among punters about the bay colt’s ability to handle several experienced horses may have encouraged the bookies to raise their opening odds against the on-money favourite Ahead Of My Time and they did offer more than even-money for his victory. Ahead Of My Time made the bookies rue their decision as he successfully match strides with his opponents.

A Sandesh kept Todywalla’s candidate handy behind leader Arc De Triomphe and shifted gears as the field approached the two furlong marker. The winner galloped resolutely to take charge and strode out gallantly for his third career win. Arc De Triomphe held on grimly to keep the runner-up berth out of Alastair and Queen O’War’s reach. The last named was badly held up towards the rails and Nikhil Parmar failed to extricate her and find room for a clear run.

Trainer Hosidar Daji and apprentice A Prakash were associated with another winner this week when Arabian Phoenix (Tenth Star – Zahour Al Yasmeen) added another race to his kitty after change in stables. Arabian Phoenix was backed enthusiastically as the admirers of My Treasure had second thoughts about the Malesh Narredu saddled and Yash Narredu ridden maiden filly’s chances. Arabian Phoenix chased no-hoper The Pianist and Dali Swirl into the straight and gained the upper hand over the latter near the distance post. Dali Swirl ended a game second ahead of late-finishing Leto and Queen Regnant. Jerusalem finished a poor fifth.

Esperanza (Phoenix Tower – Anacapri) was the shortest price runner of the day and the Shazaan Shah trained filly literally raised no sweat when making a winning debut. It started to rain heavily as the horses were being stalled for the five-furlong sprint. But that made no difference to the fortunes of the S Zervan ridden Esperanza, who made every post of the five-furlong trip a winning one. Golden Lioness made a late bid to finish second ahead of Mojo. Outlander ran on late to be fourth.

The biggest upset of the day was caused by the Imtiaz Sait trained and PS Kaviraj ridden aged mare Fleur De Lys, who pulled the rug from below the feet of her six rivals when going pillar to post over a nine furlong trip for the Jamshed Dalal Trophy. Carrying feather weight on her back. Fleur De Lys ran merrily in front and kept going to outwit her fancied rivals. As Fleur De Lys entered the home stretch, it was apparent that neither favourite Jerusalem nor Royal Alamdaar or the winner's stable-mate Sky Storm would topple the winner.

Pepper (Surf Rider – To The Manor Born) earned some precious stakes as he posted a convincing win over A Sandesh partnered favourite Majestic Warrior, who tried runaway tactics but found his weight a stopper when the Pepper challenged him. Trevor Patel ridden Rhythm Of Nature saved place money while Rubik Star ended a tame fourth.